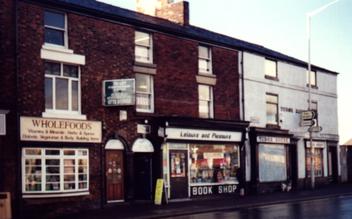 Or at least it was until we discovered this notice in the Preston Chronicle for 1869.  So we now know when the Savings Bank was closed and where, if they were not withdrawn the remaining accounts were transferred to.

Savings Bank
According to the Mannix Trade Directory of 1841, a Savings Bank was established in May 1821 with by 1841, 1000 investors. The Treasurer was Francis Sergeant Pilkington of handloom weaver fame in Fox Lane. The Actuary was Thomas Addison. From the 1844 Ordnance Survey Map, the Savings Bank would have been situated within the three-storey building opposite the Roebuck.

This was confirmed by a newspaper advisement for the forerunner of the Nat West which states that they took over the premises of the Savings Bank.

In the 1851 Slaters Directory, the two secretaries were Thomas Addison (also listed in the Directory as agent for the Clerical Medical Assurance Co) and Rev. Thomas Rowlandson (not listed as a vicar in the area), the Treasurer still being Mr Pilkington. The bank opening hours were only between 11 a.m. to 1.30 p.m. on a Monday.

By the 1865 Trade Directory, the Savings Bank was being conducted by Frederick Hackforth, the local chemist from within his premises at Occleshaw House at the junction of Worden Lane and Fox Lane. This is the last entry for the Savings Bank.

In the Banks Archives, there was a note in the Directors resolution and order book on 22nd March 1878 that stated “ Open a sub-branch at Leyland? Decided to open a sub-branch when arrangements can be completed “, a suggested date for opening has been 12th April 1878. According to the Barratt Trade Directory of 1881, The Lancaster Banking Co had premises at 32 Towngate (Tudor House).

The Lancaster Banking Co was established in 1826 before becoming part of the Manchester & Liverpool District Banking Co Ltd in 1907. The banking hours between 1881 and 1892 were 10 a.m. to 2.30 p.m. on a Friday, being slightly amended to 10.30 a.m. to 2.15 p.m. after 1895. With the Trade Directories between 1901 and 1907, the hours were standardised with the Midland Bank next door, both premises opening between 10 a.m. and 2 p.m. on Monday and Friday. The Directory of 1910 as well as noting the change of name to the Manchester & Liverpool District Banking Co Ltd shows the addition of the same opening hours on Wednesday.

On 12th December 1911, the Manchester & Liverpool District Banking Co Ltd (1829 – 1924) opened a sub-branch in temporary premises at Chapel Brow. As the Board minutes state “ On 12th December last a new sub-branch to Preston was opened in temporary premises at Chapel Brow, Leyland, and business will be transacted there on Tuesday, Thursday and Saturday; our already existing office at Towngate, Leyland, being opened on Monday, Wednesday and Friday, as heretofore. Leyland is a scattered district, and it has been thought desirable that the Bank should have an office in that portion of Leyland, which is somewhat far removed from our Towngate branch. We have arranged to purchase a site for a permanent office near the Chapel Brow temporary premises “.

Therefore on 6th July 1912, the Manchester & Liverpool District Banking Co Ltd bought premises at 4 Golden Hill Lane on the corner of Hastings Road and Golden Hill Lane, transferring the business to the permanent premises on 3rd July 1913. Though according to the trade directory of 1913, the opening hours reverted to the same as the Towngate branch.

The two bank buildings side by side. To the left the original Manchester & Liverpool District Bank opened in 1912. To the right the  later Manchester & County Bank built in 1927. 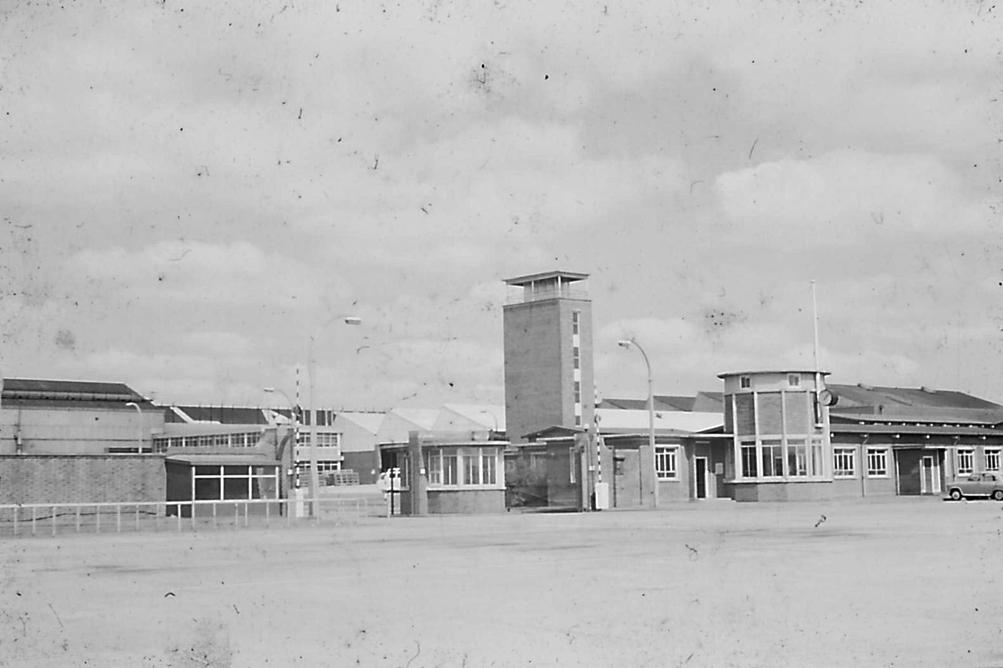 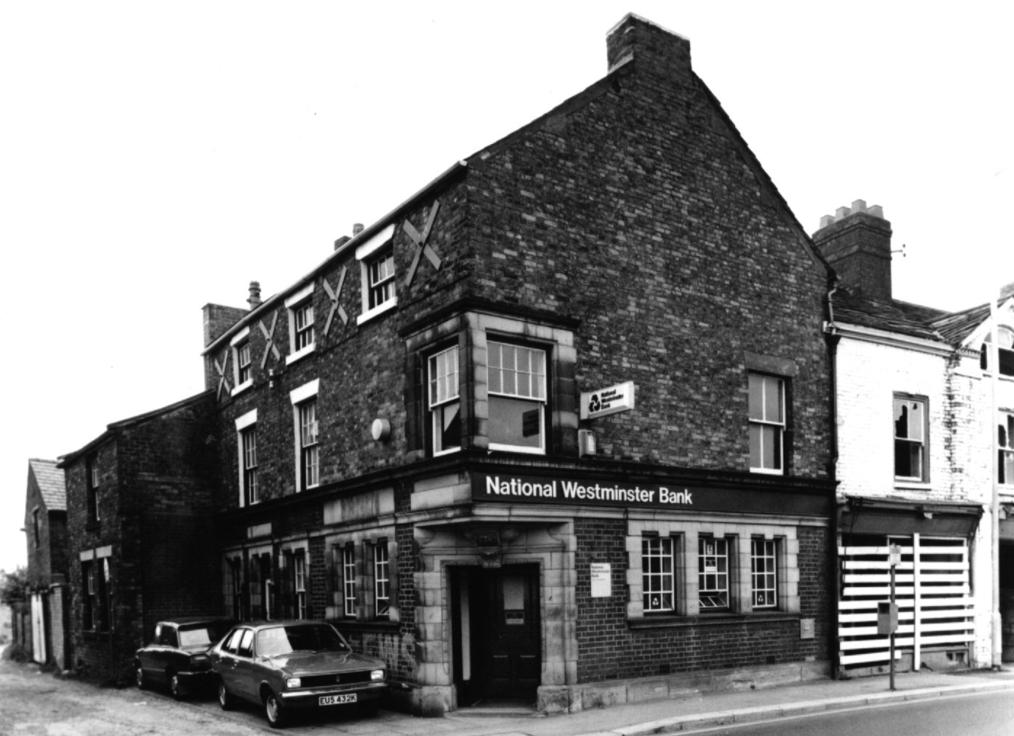 The 1922 Trade Directory displays confusion as it states that the Bank had now moved its Golden Hill Lane branch down Chapel Brow (though not from Nat West ‘s archives) and was now open daily from 9.30 a.m. to 11.30 a.m. at both of its Leyland branches. By 1926, with the change of name to the District Bank, it would seem that the hours had reverted to 9.30 a.m. to 3 p.m. at both branches. The Saturday opening being 9.30 a.m. to 12 noon in Chapel Brow, while Towngate closed at 11.30 a.m. (the same as the Midland Bank).

According to the 1936 Trade Directory, the merger of the District Bank and the County Bank had taken place with the business of 4 Golden Hill Lane being transferred to the County Bank branch premises at 2 Golden Hill Lane (the present branch). Though the Bank’s own records say the merger only took place on 2nd August 1938. The old District Bank was sold to Leyland Paints. On 1st January 1937, Leyland was constituted a Full Branch of the Bank.

On 27th May 1974, the Bank purchased the freehold of the adjoining premises at 4 Golden Hill Lane, which had been sold by the District Bank in 1948, and the branch was extended on the enlarged site during 1975 and 1976.

The branch in Towngate was reduced to a single storey building when the rest of the property were demolished on the south side of Towngate and it was discovered that the other buildings in the block were assisting to hold the three storey building up. The branch was finally closed on 1st November 1985 with the proposed Towngate redevelopment.
On 8th May 1939, a new branch was opened at 34 Hough Lane, more accessible for the Motors North and South Works. It then moved to its final position at 26 Hough Lane in late 1940 / early 1941. The terrace had been built as a row of houses with gardens in 1899. It only comprised a banking chamber downstairs with two offices upstairs, no room for a strongroom. It closed on 29th August 1997 and was converted into a newsagent.

There were two other short-term branches in Leyland; the first was the Seven Stars branch opened on 1st January 1970 at 352 Leyland Lane, closing on 25th October 1991. The second branch opened on 17th April 1970 at the Spurrier Works, Leyland as a sub-branch to Leyland. The hours of business were Wednesday and Fridays between 10 a.m. and 3 p.m. The branch was only open to Leyland Motors personnel and closed permanently on 17th July 1991. 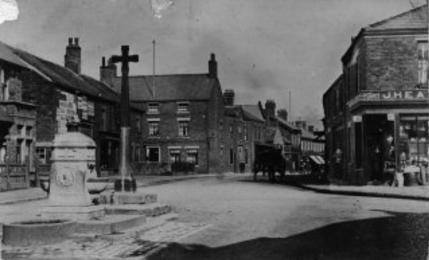 The premises were described in a Nat West valuation report as “ rustic brick front with stone facings “ and in a “ good commanding position at the top of shopping street, but on the edge of the shopping area “. The accommodation included a vestibule, banking chamber, manager’s room and clerk’s room on the ground floor, with another clerk’s room and book room on the first floor.

The business steadily expanded and on 2nd September 1929 Leyland was severed from Preston branch and constituted an independent branch of the Bank. In November 1934, the title of the Bank was shortened to County Bank Limited and in 1935 County Bank was acquired by the District Bank.

As we have established that the Manchester & Liverpool District Banking Co Ltd had another branch within the Public Hall in 1919, before moving to the property at the junction with Cow Lane, 27 Towngate in 1920, the village had continued banking facilities. A tale being told that the then Squire Farington used the bank’s electric clock in the Public Hall to check his own timepiece not trusting the parish church clock, no change there.

The property at 27 Towngate, (renumbering later changing this to No 21) a town house was previously owned by John Stanning, head of John Stanning & Sons Ltd, bleachers and dyers but occupied by Mr John McKittrick (Senior), the Works Manager, being built prior to 1869.

While the main District Bank was at Golden Hill Lane, the Bank Manager’s home was behind and above the shop at 21 Towngate. The Bank part of the building comprised the banking chamber and office on the ground floor, with a cellar in the basement but no strong room. The Manager’s House comprised on the ground floor a hall, living room, kitchen, scullery and pantry, while on the first floor was five bedrooms and a bathroom. The outside facilities included a garage, wash house, green house and coalhouse. Type your paragraph here.