The original route of the Lancaster Canal including the section from Walton Summit to Preston which subsequently became the tram road are also shown clearly. If you follow the line of the Leeds & Liverpool from where it crosses the Lancaster Canal on the level adjacent to the A6 in Bamber Bridge just south of the Withy Trees. It would have then headed on an aqueduct over the River Lostock across the fields to the Stanifield Lane / Lydiate Lane junction. The canal would then follow Stanifield Lane to the west eventually reaching Golden Hill Lane which it crossed near Northgate.

As this is the plan for the Lancaster Canal, there are no details regarding the provision of  locks for the Leeds & Liverpool, though the land configuration would suggestion a short flight of locks down into the valley of  Bannister Brook. The canal then heads west to follow the brook's course until it again heads south behind Towngate roughly on the line of the Broadfield estate. It reaches Fox Lane which it crosses and then disappears as the line heads almost straight for Shaw Hall. It may be a coincidence that the line had not been established through the land of two of the largest landowners in the area, namely the De Hoghtons and the ffaringtons.

So Leyland did not manage to become a canal village, however if you take a look at the nearby village of Burscough Bridge you can imagine what might have been!

The spot in the centre of Parbold where the Leeds & Liverpool Canal was meant to head north (left) via Eccleston and Leyland but was diverted east (right) to the delights of Wigan.

After the first Act was obtained, construction proceeded as funds permitted but no work was carried out on the line between Barrowford and Newburgh because of anticipated low returns on this section. In July 1791 there was the first suggestion that a change in the Leyland line by deviating south of  Bamber Bridge, via Duxbury, Red Moss and Westhoughton to connect with the head of  the canal being built by the company to replace the River Douglas Navigation.

This deviation was to enable a branch to be made to the proposed junction with the Manchester, Bolton & Bury Canal at Red Moss and thereby connect with the growing Manchester traffic. However, this caused a problem as the Red Moss junction would have been 215 feet higher than the Bamber Bridge level and thereby constitute a second summit level with the additional water supplies that would be needed. If the canal was to proceed at a high level from Barrowford via Burnley, Blackburn and Chorley this could be avoided.

The committee instructed a delegation to study both lines and thus when their report was presented to the committee on 11th February 1792. There were two options given, either a 200 foot rise from the Whalley line near Leyland or by changing the line west of Colne and maintaining a higher level to Red Moss. This would increase the distance by 12 miles, though it was not regarded as a problem, since the company were now of the opinion that instead of the shortest practicable trans - Pennine canal for mainly long distance traffic (a position overtaken by the Rochdale and Huddersfield canals), it would now be seen as a waterway whose internal trade would be the most important source of revenue.

As the Leyland route was again described as “a country of marl ..... Moreover the countryside was thinly populated and generally destitute of  trade”, it is not surprising that on 27th February 1792, the committee meeting in Bradford unanimously resolved that it would be highly beneficial to the company to follow the line via Blackburn. Thus it was that Leyland lost its canal forever. Unfortunately for the Manchester Bolton & Bury Canal, the Leeds & Liverpool Canal eventually decided to make a connection with the Bridgewater Canal via the Leigh branch and the canal junction on Red Moss never materialised.

Meanwhile, the Lancaster Canal had been surveyed in the years 1791 and 1792 by John Rennie, being promoted from Westhoughton in the coal fields to Kendal with the limestone quarries, this initial exchange of trade being planned. Following the passing of the Act of Parliament on 10th June 1792, the canal was built in two sections, north from the basin at Preston to Kendal and south from Walton Summit towards Westhoughton getting as far as Aspull, being opened in 1799.

The final section of the Leeds & Liverpool Canal being the seven Johnson Hillock locks at Heapey which were built by the Lancaster Canal in 1816 under an agreement.

Would you be living on the towpath?

When I have researched the local history of the Leeds and Liverpool Canal, the only available plan of the original route was one of the whole canal from Leeds to Liverpool on one sheet and thus a very small scale, Leyland and Shaw Hall being denoted by two dots.

However, I was surprised on a visit to the Lancaster Maritime Museum to be confronted by a plan of the first survey of the Lancaster Canal surveyed by John Rennie in 1791 and 1792 from Kendal to Westhoughton on the museum wall. The map accompanying this article was taken from that display and clearly shows the proposed Leeds & Liverpool Canal from Hoghton to Leyland, the only confusion being that north is to the left. 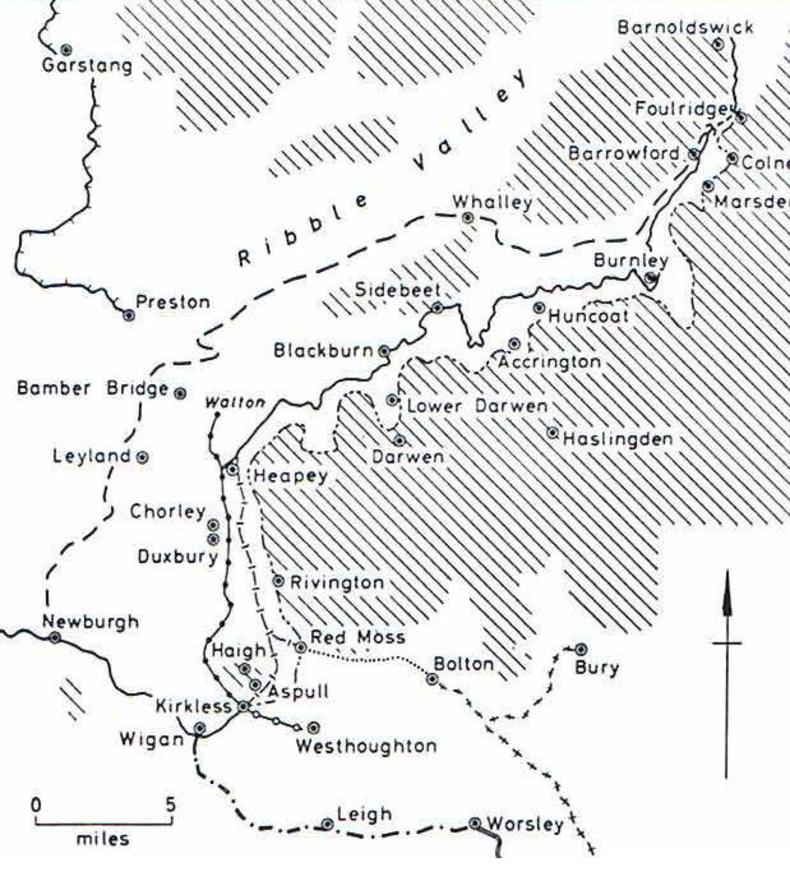 Which way to go?

When the first Act was passed on 19th May 1770, the original line of the Leeds & Liverpool Canal was via Bingley, Skipton, Gargrave, Barnoldswick, Foulridge, Colne, Whalley, Bamber Bridge, Leyland and Eccleston. Yet by 1793, the company was applying to Parliament to change the route of the section between Colne and Newburgh and to proceed instead via Burnley, Blackburn, Chorley, Red Moss and Wigan. While this application was turned down, the following year an Act empowered the company to build its canal via Burnley, Blackburn and Heapey, thereby joining the Lancaster Canal (Southern Section).

There are therefore two main questions for the Leyland historian in respect of the above mentioned facts; the first being what changed in the twenty three years for the route of this new form of transport to bypass Leyland? And secondly if it had passed through Leyland where and how it would had affected the town we know today? 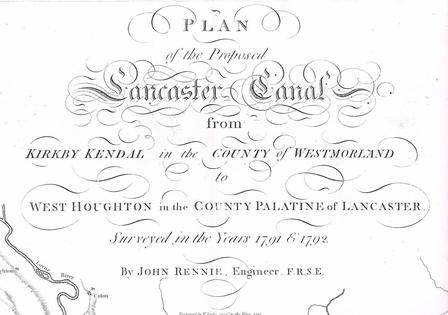 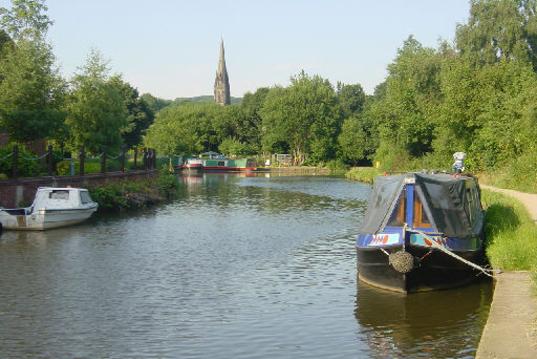 To investigate the first question, we must return to the origins of the canal. The original line had been surveyed in 1768 by John Longbotham for a canal between Leeds and Liverpool which was resurveyed by James Brindley. This route was the one embodied in the Act of 1770 and on the basis of his estimate of £ 259,777 for the completion of the canal, the company was authorised to raise £ 260,000 capital in 2600 shares with an additional £ 60000 if required. This line, however, was not agreed to be the best. During 1769 Lancashire members of the committee which had been formed to promote the canal were campaigning for a different line between Colne and Newburgh. While the main controlling committee consisted of Yorkshire men for many years, there was a separate but subordinate Liverpool Committee right up to 1850, and in earlier years there was much jealously between them.

Robert Whitworth, who later became the company's engineer, was appointed to make a report on the alternative proposal. Because he anticipated greater problems of construction on the line favoured by the Lancashire interests and laid out by Burdett via Blackburn and Chorley, he recommended that Longbotham's original line via Whalley and Leyland should be adopted. However, it was argued that the trade on the Whalley and Leyland line would be far exceeded by that on the Blackburn line. The Lancashire gentlemen considered that “The whole line (Leyland) .......  is thin of inhabitants, void of native productions, passes near no market towns, and has little or no trade “according to a letter to the Liverpool committee meeting of 14th August 1769.”

The Blackburn line in contrast passed through an area in which there were many coalmines and stone quarries and where the demand for lime would be “immense”. It was “the most rich, populous, manufacturing part of Lancashire, full of valuable native productions, (which) will supply Liverpool with exports five times more ... than is now employed”

Despite this dissension the Leyland line was accepted for inclusion in the Bill because it offered a shorter and less expensive communication between Leeds and Liverpool and it approached more closely north Lancashire, a source of limestone. Brindley estimated that the canal from Foulridge to Liverpool via Leyland would cost £ 174,324 for a length of 66.25 miles, while the line via Blackburn would cost £ 240,881 for 83 miles. 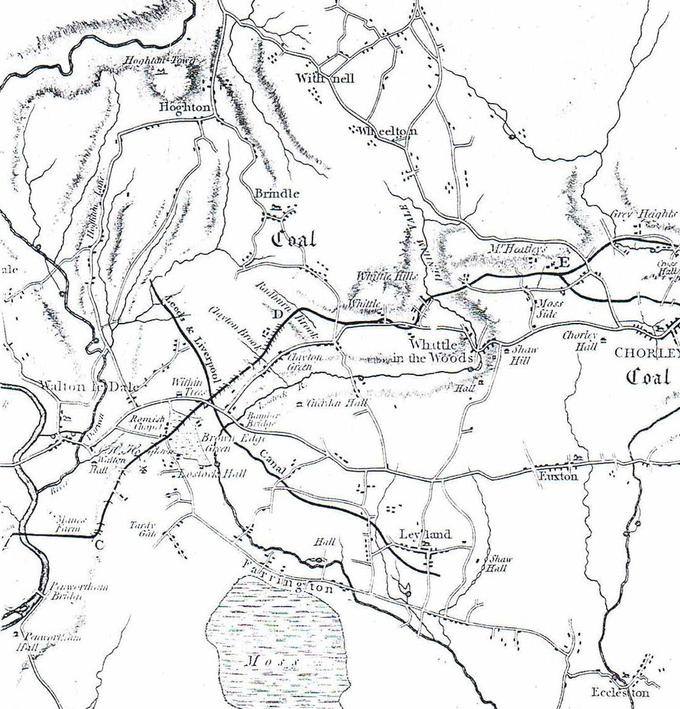 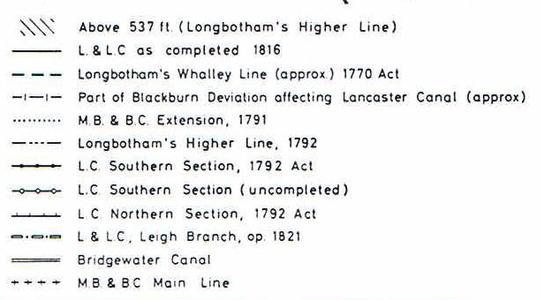