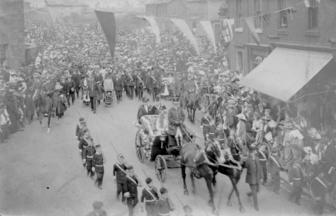 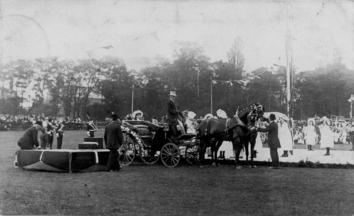 The Leyland May Festival of Wednesday 29th May 1889 was first intended as a children's fete, to revive the fast dying observance of Royal Oak day. It was arranged by the Sunday school teachers of the Parish Church. The Festival was usually fixed for the last Thursday and Saturday in May. It was held annually from 1889 - 1936, with an exception of a two years break in 1901-2, and four years during World War 1, 1915 - 1918

There were many regular features each year as well as the  May Queens, including Tom Thumb and wife, the Ten Nigger Boys, The Four Seasons shown on the floats and of course the  Leyland Morris Dancers.

The Procession and its Route - 1889 – 1936 - The original route was from the schools in Union Street (now Fox Lane), through Towngate, Hough Lane, and Chapel Brow as far as the Railway Station - later extended to Mill Street - returning by the same route to the Mayfield.

It was revived in 1951 to celebrate the Festival of Britain and the official opening of Worden Park by Leyland Urban District Council who under the Chairmanship of James Hunt ran the event for six years.

The Procession and its Route -1951 – 1968 Circular Route - In 1951, the assembly point was St. Andrews Green behind the War Memorial, the route then proceeding down Balcarres Road, Turpin Green Lane, Hough Lane, Towngate and then down Worden Lane to the park

Saturday May 21st 1966 – With the revival of the Festival in 1966, Jim Hunt became President of the Committee until he retired in 1980, thirty years promoting Festival.

In 1969 many things changed, following a run of bad weather it was decided by the festival committee to move the date of the festival to the first Saturday of June.

Changing the starting point to Centurion Way allowed the procession to pass through the more populated area of Stanifield Lane, Preston Road and down Chapel Brow to Hough Lane, thence the usual route to the park.

And Festi, the symbol of the Festival for many years

In 1970, the Leyland Historical Society exhibition in Public Hall

The signs of the coming Festival was the sale of programmes door to door and available in many shops around the town, with many volunteers setting up the Park and the Balloons flypast in the days leading up to Festival Day

In 1982, I managed to win a prize in the Patrons Tent raffle which consisted of a ride in the Free Fall Parachutes helicopter to view the Festival from above, unfortunately without a camera.

1986 - was another memorable year with the Gliders flying over the main arena (prior to Health & Safety) to the sound of "Shine On You Crazy Diamond" by Pink Floyd.

From 1993 the Historical Society had a display in the Craft Tent with the Craft Tent then being taken over by myself until the last Festival in 2000.