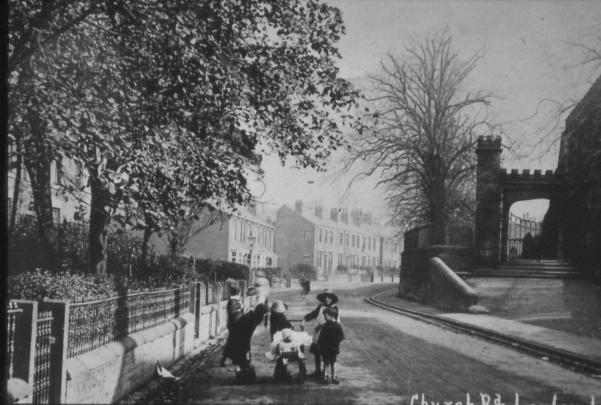 This consists of two rectangular fragments of carved stone cemented together, their depictions including a torso, letters, and a star.

They are mounted on a pedestal with a stone plaque inscribed with the names of the churchwardens and the date 1759.

A row of 26 houses in brick with stone dressings and slate roofs. They have two storeys and basement workshops beneath. The houses are approached by steps, and have a doorway, a window to the left, and two windows in the top floor, all with stone splayed heads, and most are sashes.

The basements have separate entrances down steps, with a doorway and two windows at the front. At the rear are additional entrances to the basements, stairlight windows, and most of the other windows are casements.

Originally one or two houses, the building was later amended for other uses. It is in rendered brick with a slate roof. There are three storeys and two bays, with shop fronts in the ground floor.

The middle floor contains tall windows, and in the top floor are square windows. The doors have stone architraves. Inside, there are timber- framed partition walls. 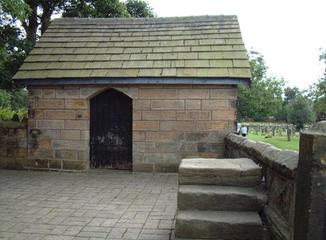 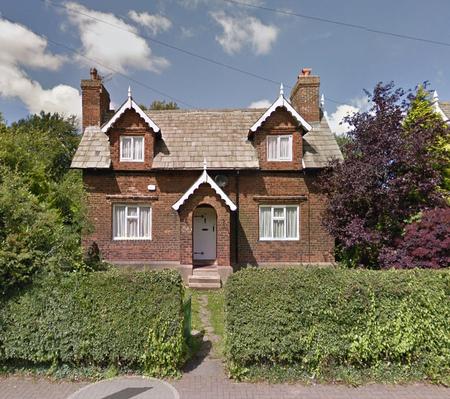 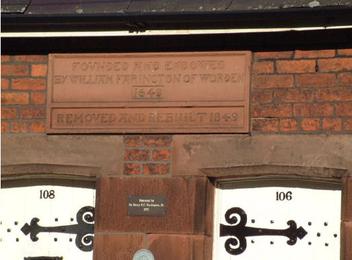 The monument is in the churchyard of St Andrew’s Church and commemorates William Walker, parish clerk, who died in 1588. It is in sandstone, and consists of a rectangular slab on a stone base.

On the slab is the incised life-sized figure of a man, and this is surrounded by a continuous inscription on four sides in English. Also on the slab are two more inscriptions in Latin. 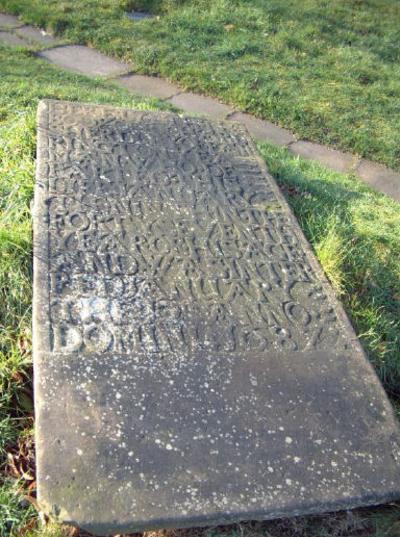 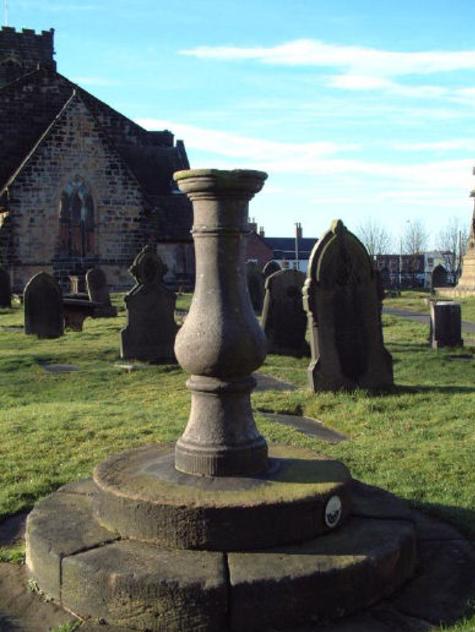 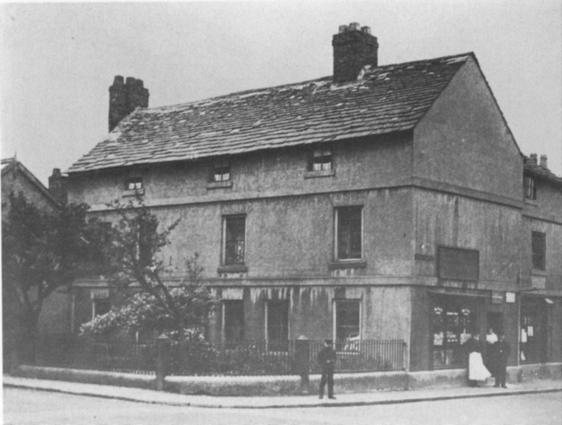 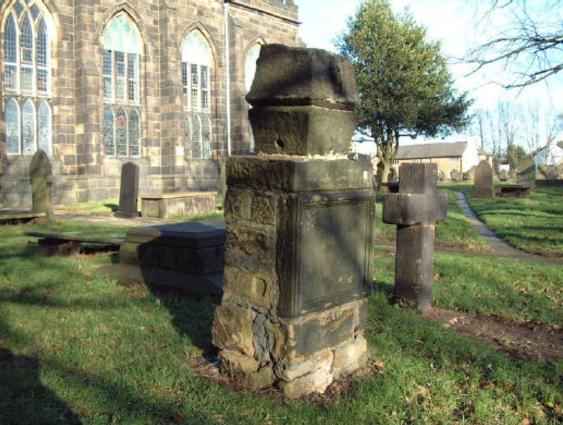 A row of three cottages, built as part of the Farington Almshouse Trust, in brick with slate roofs. They are in a single storey with attics, and have symmetrical fronts.

Each cottage has a central gabled porch with a round-headed opening, and there are four gabled dormers; all the gables have wavy bargeboards and finials. The windows are casements.

Note that if you put the map reference into Google it will provide a map to find the building. 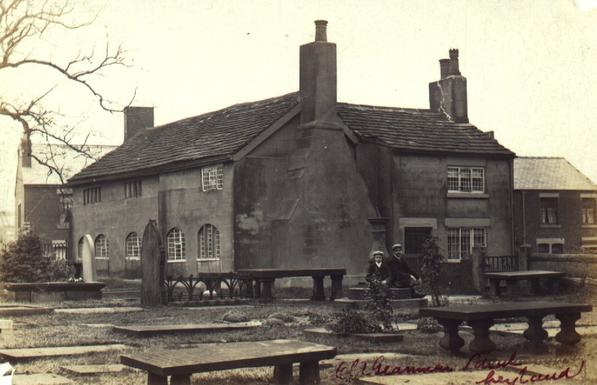 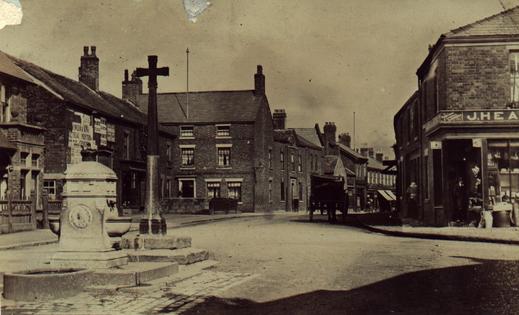 The watch house is in the churchyard of St Andrew’s Church. It is in ashlar with a slate roof, and consists of a single-storey rectangular cell. The building contains an arched window and a plain doorway with an arched lintel. 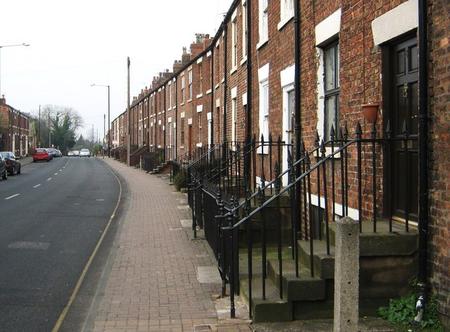 A brick cottage with a slate roof, built as part of the Farington Almshouse Trust. It has a single storey with an attic, and a symmetrical front.

The cottage has a central gabled  porch with a round-headed opening, and two gabled dormers; all the gables have wavy bargeboards and finials. The windows are casements. 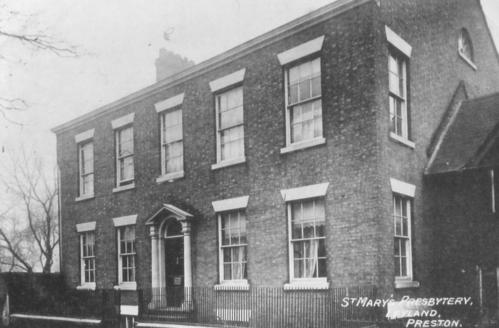 The stone cross was restored in 1877. It consists of two square steps, and a tall, tapering shaft incorporating part of the original octagonal shaft. This is surmounted by a cross

A brick cottage with a slate roof, built as part of the Farington Almshouse Trust. It has a single storey with an attic, and a symmetrical front.

The cottage has a central gabled porch with a round-headed opening, and two gabled dormers; all the gables have wavy bargeboards and finials. The windows are casements. 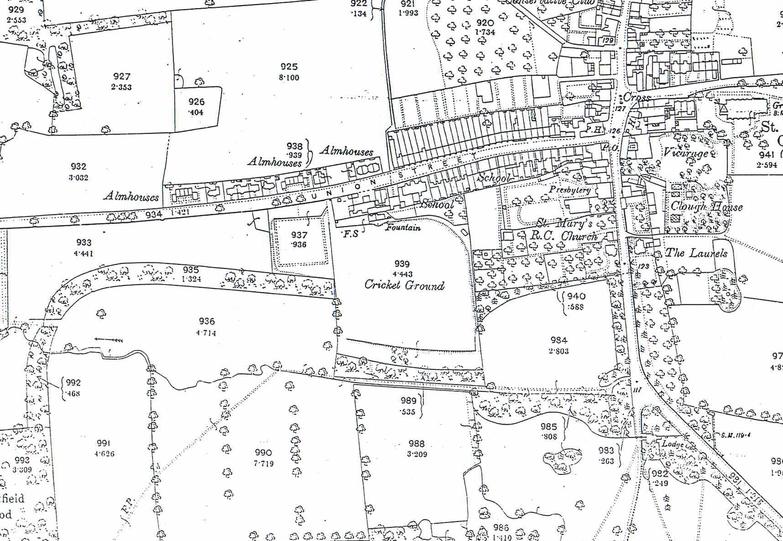 ​The Parish Church and the Conservation Area.

A rendered house, probably on brick, with a slate roof. It has three storeys and an extension at the rear. The windows on the ground and middle floors are sashes, and in the top floor they are casements.

The doorcase has pilasters and an open pediment. Inside the house is extensive timber-framing. 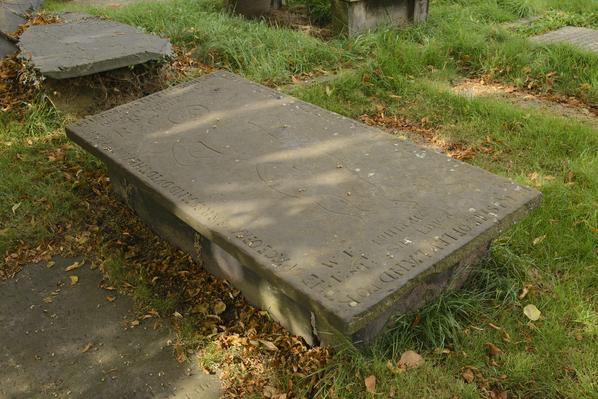 A brick house with stone dressings and a slate roof. It has two storeys, an attic and a basement, and a symmetrical front of five bays.

In the centre is a doorcase with three-quarter Doric columns, an open pediment, and a semicircular fanlight. All the windows are sashes, and there is a semicircular attic window in the left return.

The school, later used as a nursery, is in stone with a slate roof, and is in Jacobean style. It has a single storey and is in an F-shaped plan, with two unequal gabled projections to the front.

The windows are mullioned or mullioned and transomed with hood moulds. To the left is a gable porch with a ball finial, and in the left gable is an inscribed plaque. 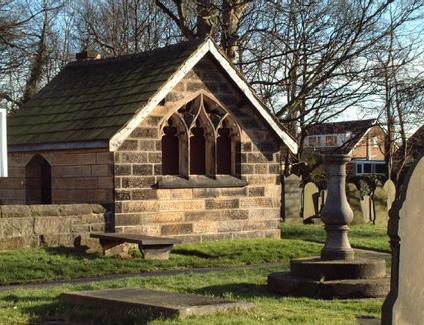 A public house in pebble-dashed brick on a stone plinth, with stone quoins and stone-slate roofs. There are two storeys in three different heights, and the building has a rectangular plan in four bays, with another bay set back at the left.

There are two doors with stone jambs and entablatures, some of the windows are casements, and others are sashes. 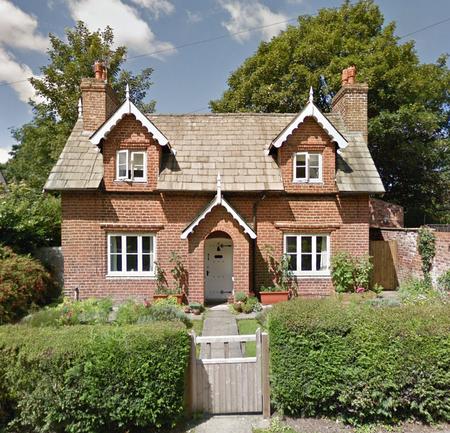 The gravestone is in the churchyard of St Andrew’s Church and commemorates Richard Sherdley. It consists of a raised stone slab on a low stone base, and contains a long inscription in relief. 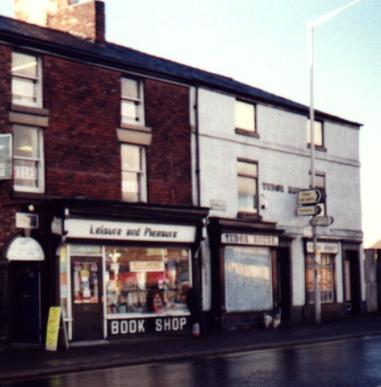 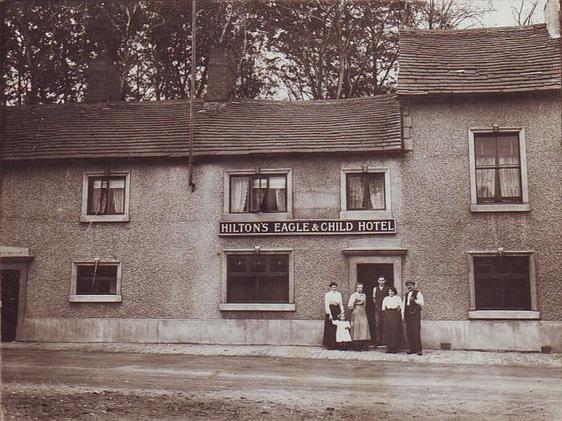 The gateway and wall, all in stone, form part of the boundary to the churchyard of St Andrew’s Church. The gateway has a wide Tudor arch with battlemented coping between piers that are also battlemented. The wall extends for about 100 metres (330 feet) to the east, and has iron railings that have Gothic arches with urn finials. 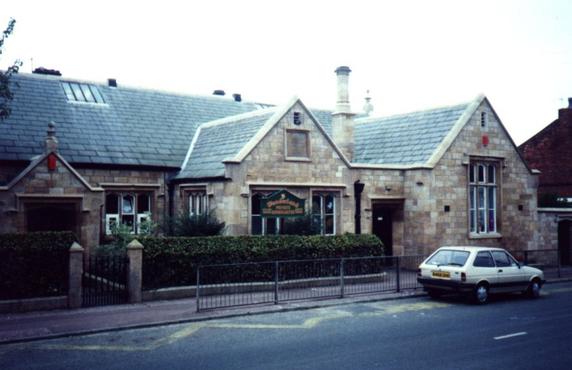 Stone Cross in Centre of Road at Junction with Church Road

A group of six almshouses, replacing buildings of 1649. They are in brick on a stone plinth with sandstone quoins and a slate roof. They are in a single storey, and consists of a central range of four cottages, and two cottages in projecting gabled wings.

Above the two central doors is an inscribed stone plaque, and above the other doorways are sandstone plaques carved with different shields. The windows are mullioned, and the gables contain applied timber-framing. At the rear is a continuous outshut.

The sundial is in the churchyard of St Andrew’s Church. It is in stone, and consists of a baluster-shaped pedestal on two circular steps, with a moulded base and cap. On the top is a brass plate and a scrolled gnomon.

The building has been converted into a museum. It is timber framed on a stone plinth, later encased in brick with stone quoins, and it has a slate roof. Both the school and the house have two storeys, the school having four bays, and the house one.

The windows are mullioned. The current entrance is through a doorway in the former house, above which is an inscribed lintel. Inside, much timber framing has been retained. 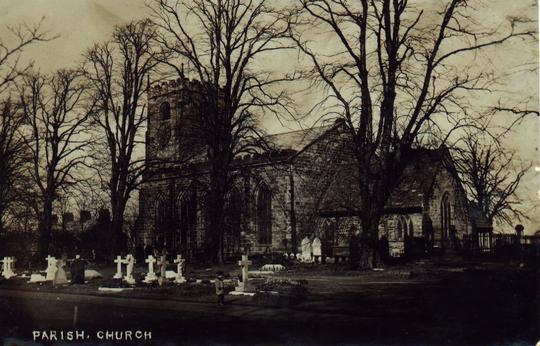