THE STORY SO FAR

The last official guide and industrial handbook produced by Leyland Urban District Council in 1970’s before the creation of South Ribble, states that “Leyland is a highly industrialised town where some 18,000 people are employed. Of these, over 8,000 travel in daily from the surrounding districts”.

Note that Leyland UDC before 1974 did not include Farington as this was in Preston Rural District Council. So if you add in the workforces of Farington Mill, Leyland Motor’s Spurrier & Farington Works and BTR Farington employed doubles to between 30,000 and 40,000 people

So the Historical Society have plenty of memories to pick on.

When we brought out the first edition of the Industrial Heritage book back in 2010, it included an advert for the Oral History Project together with a leaflet to be completed. The leaflet response at the time was 45, a good start but due to circumstances beyond our control, the project was put on hold for a few years.

The Society assisted the Commercial Vehicle Museum and the University of Central Lancashire in 2014 with a joint project on Leyland Paints.

The following year the Society and the University joined forces again to research the story of the Leyland & Birmingham Rubber Company which resulted in a special talk at the Civic Centre in April 2016. Again we took details of the attendees who had worked at the factory and got another 45 people for the oral history project.

With the launch of the second edition of the Industrial Heritage book at a meeting in February 2018 which got another 27 names to the list and subsequent radio, TV and website promotion managed to attract another 12 names by post, 38 via the website and 16 from a meeting of Leyland Medical ex-employees.

A further 60 were obtained from visitors to the Heritage Centre when it was open for 7 weeks in May and June 2018. Making a grand total of 243…..  To start with, but how many would want to be interviewed when it came to the day

When I did the update last year around about this time we had interviewed 230 people which was Phase One and we were then undertaking Phase Two the mammoth task of transcribing all the interviews which turned out to be a bigger task than anticipated as the interviews rather than being the 10 – 20 minute events became the hour – 3 hour in depth chats, with some even suggesting a return bout at a later date, the average interview time being 50 minutes.

As the virus hit, our transcribers were reduced to just Mary Longton and myself so we have soldered on and I can reveal that we have now completed transcribing the 250 interviews which is due to Mary’s work on behalf of the Society and she won Historian of the Year for her great service to the Society and future generations of researchers.

Now if you have been reading closely you will have noticed it said 250 interviews not 230 as between lockdowns I managed to interview a further twenty people socially distanced outside or via FaceTime, Teams or Zoom.

You may ask what is Phase Three. Well to understand when we have and to enable future generations to use the interviews, they need to be indexed so I will explain that in the next update as the Society start this process.

If there is one reason why it is important to do this now, I forgot the number of people who stated whilst being interviewed, it’s a pity you didn’t interview such a person before they passed away.

A sad statistic is that in the last two years since we started the interviews, we have lost at least eight of the interviewees including William Hawksworth one of the original inspirations for the Oral History Project, Fred Jolly, Barry Holcroft and Brian Tolan but their stories will live on. .

SO WHAT HAVE WE GOT

Which when fully transcribed is equal to 3,116 pages or nearly 1.6 million words.

Whist interviewing the Society has also been given numerous items, some to record and return, others to exhibit at future displays.

These include a chamber pot, ties, books, magazines, badges, videos & DVDs, pay slips, employee manuals and over 3400 photographs of the factories and the workforces.

The Industrial Heritage of Leyland & Farington.

Take an half an hour stroll round Leyland's Industrial Past with this guide to the Town Centre available as a PDF for easy printing.

A breakdown of the Industries covered. 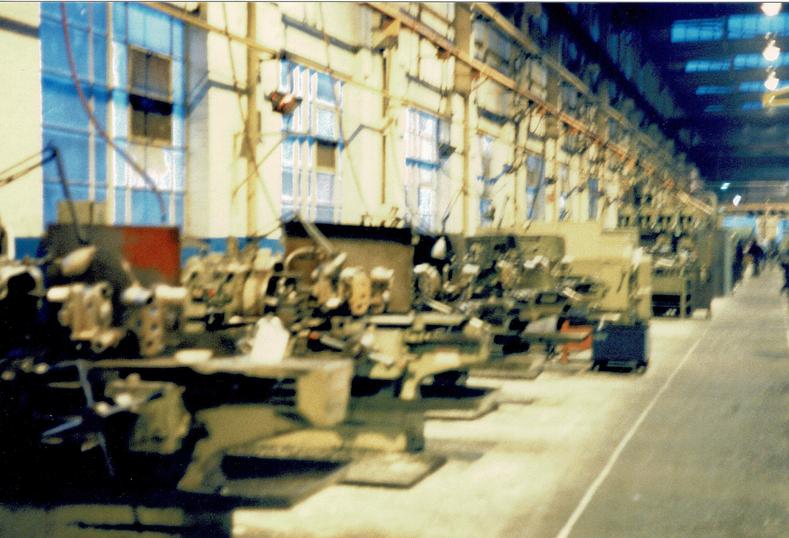 Bill Hawksworth talking about his early life in Leyland and how he came to work for Leyland Motors in 1939. 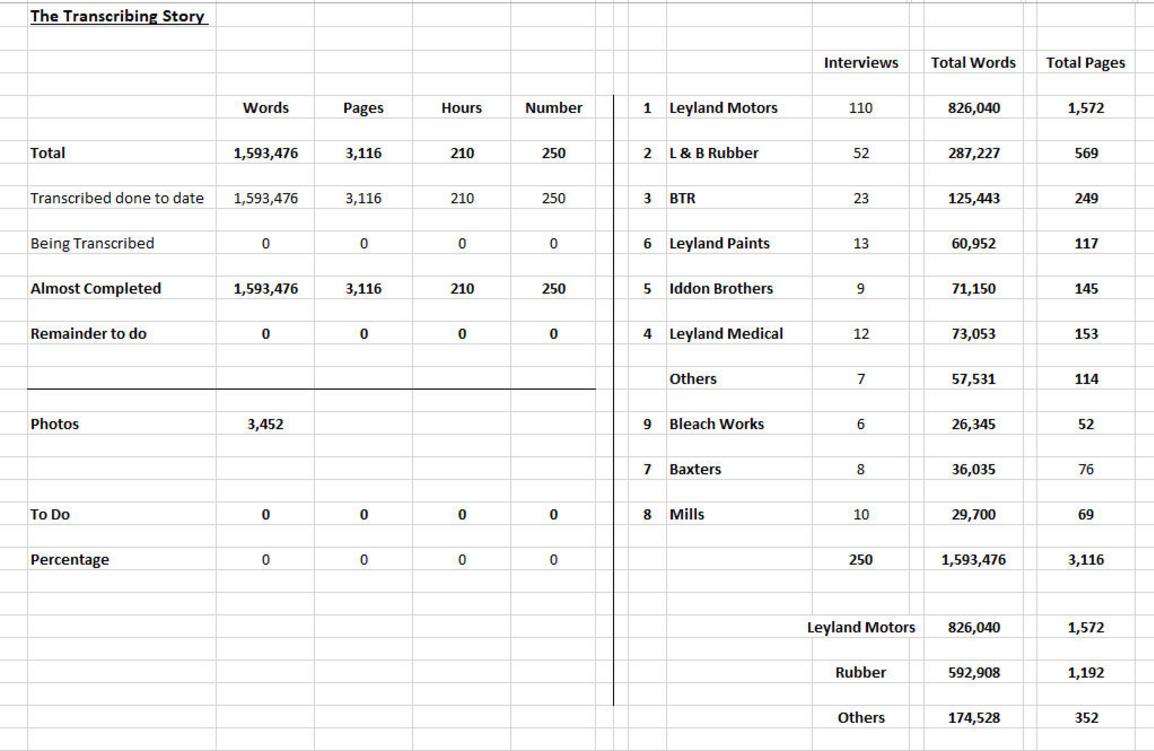 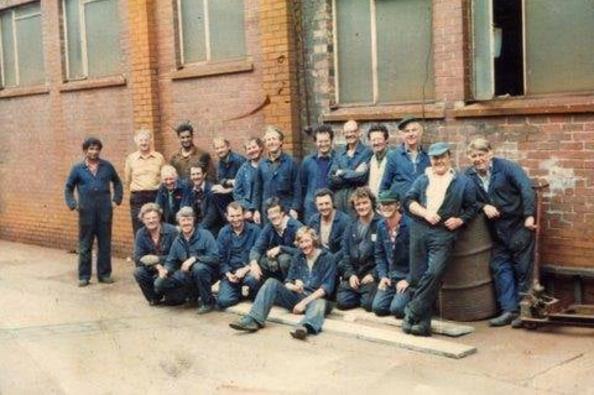 The statistics for our project have changed somewhat since last year

So far 250 have been interviewed with the remaining 35 to be continued.

Though I should point out there are a further 275 on Facebook who we haven’t approached yet.

This would make a grand total of 560. 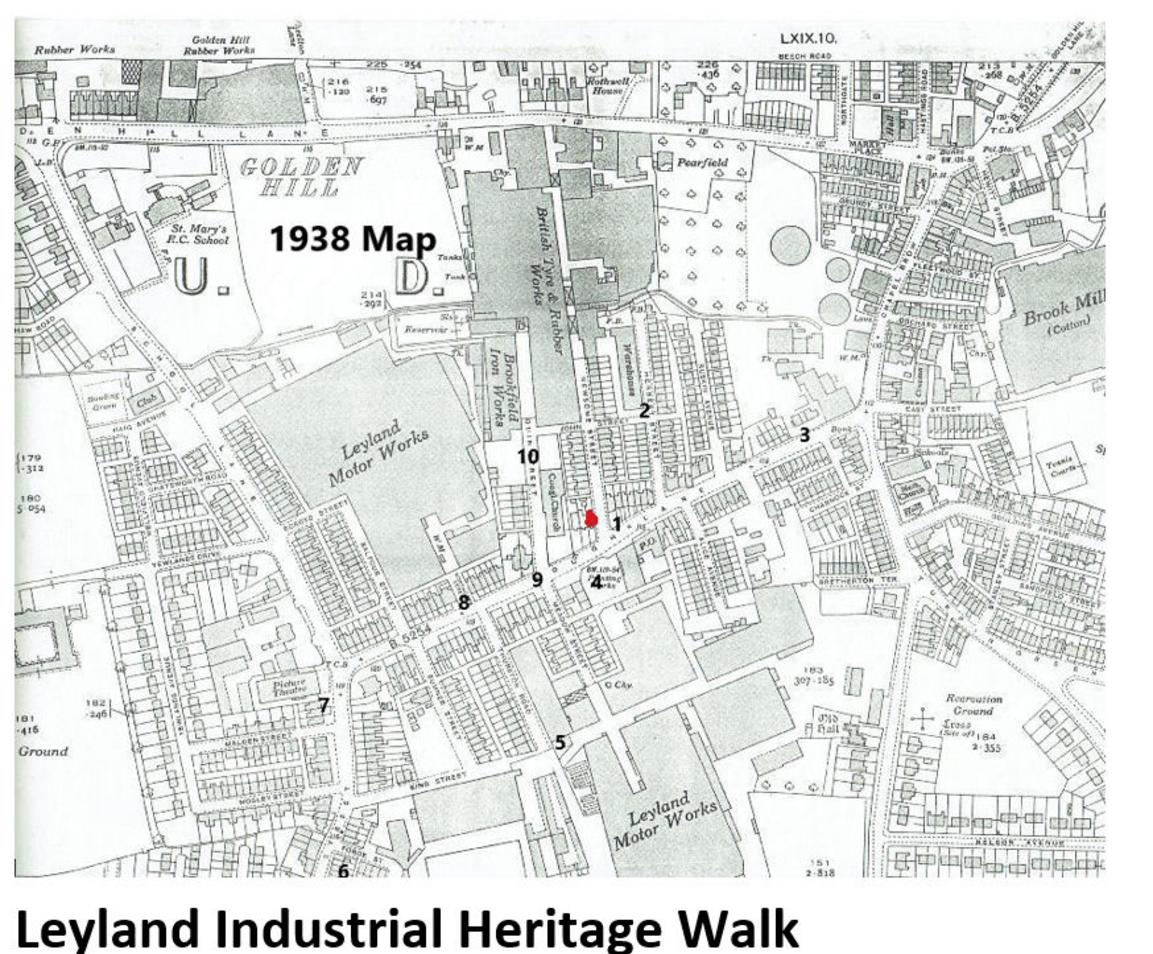 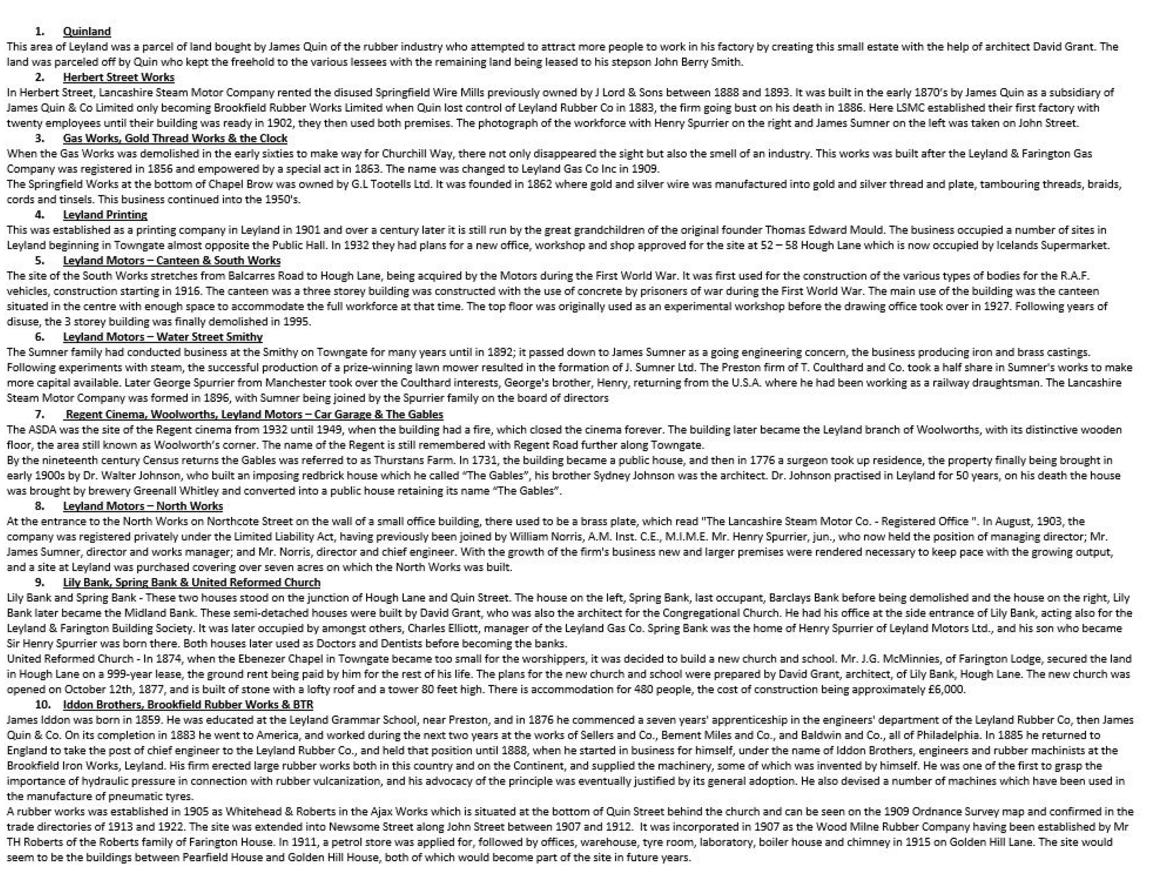