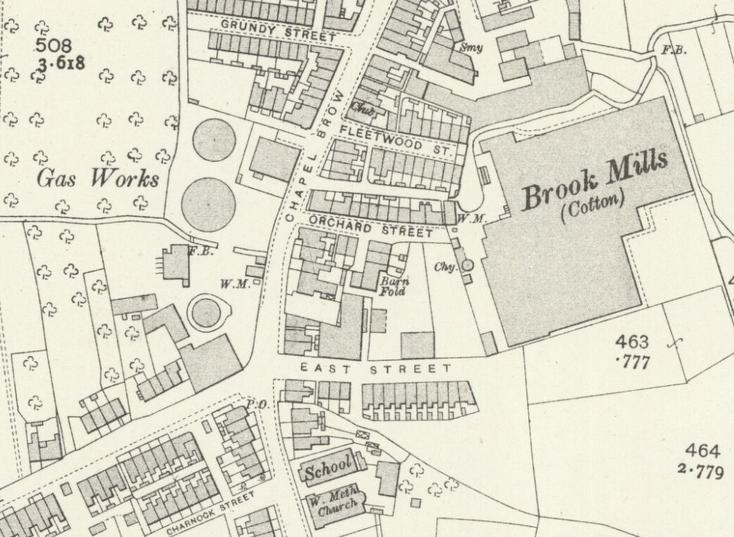 I would love to but unfortunately when Baxters was taken over by the Leyland & Birmingham in 1961 their records seem to have disappeared.
As Baxters were responsible for the first working gas mask in World War One, it was logical that they got the contracts for World War 2.
Just before the war it was reported that they had opened a satellite factory in an old cotton mill in Blackburn.
But as the MOS factory was built next to the Baxters factory in the early days of the war there was no reporting.

I am attaching a copy of a photograph of the factory in its later days as part of the Leyland Motors / British Leyland complex.
It was a separate firm called Butec who were one of the first UK users of microchips in the late 1960s
Let me know how you get on. 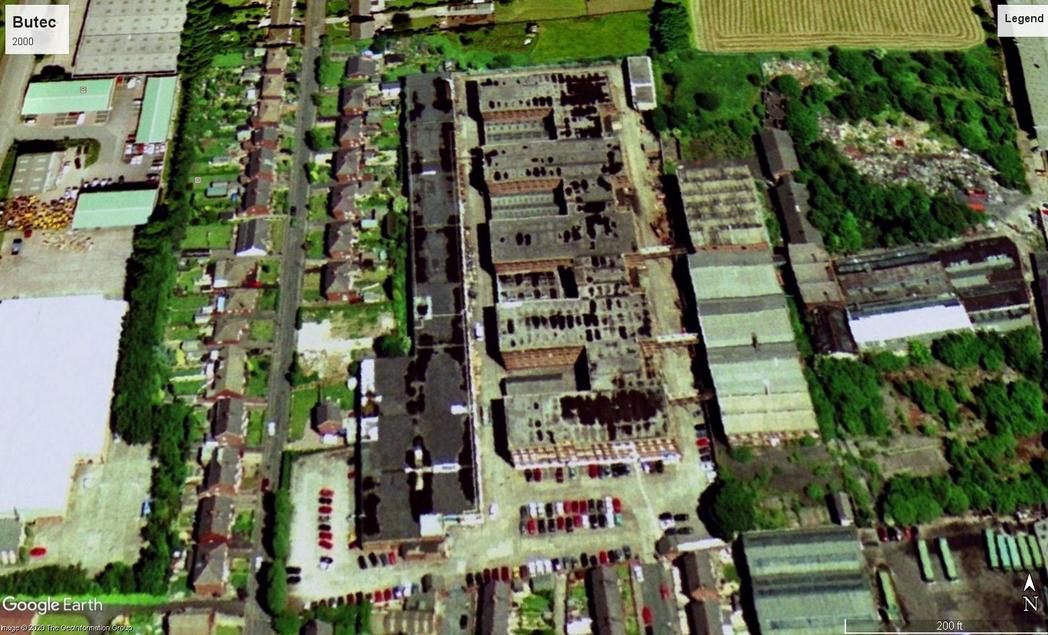 Query from Steve Leyland
Subject - Barnfold Cottage
Just found your excellent website and wondered if you had any information about Barnfold Cottage. My family lived there for most of the 1800's.

Anything you can tell me about it would be most appreciated.

You too can read it by clicking on the button.

Whats the connection between Leyland, Gas Masks and Cadburys the chocolate people.

​I am attaching a PDF file containing a 51 page booklet describing the activities of Bournville Utilities Ltd, a company set up in 1940 to produce a variety of products and machinery for the war effort at Cadbury's Bournville factory, including gas masks (respirators), which is covered on pages 28 to 32.

In addition there is an acknowledgement on page 2 for the cooperation received from "Baxters and Leyland Rubber Co Ltd". It does say that although over 5 million respirators were made at Bournville, they were not used because the enemy didn't use gas as a weapon in the UK.

I have read the booklet from cover to cover and was amazed at the variety of products that were made by the Cadbury food production employees who had no experience of the type of work they had to turn their hands to, and also the engineering skills that were utilised in some of the machinery manufactured too..

My father Ernest Chatwin was a accountant working for Cadbury's in Birmingham. He was given leave of absence in May 1942 until October 1945 to work in Leyland for the Ministry of Supply. I was born in 1946 and he died in 1966. I am curious to know what he was doing for MOS. Are there any records of the MOS during the mid 1940s and their specific role in the war effort?

Are there any Government offices in Leyland now?

We replied  that the only MOS factory in Leyland during the war was attached to Baxters Rubber Works and they made gas masks.
Did that ever come up in conversation with your father?

Back came the reply

My research has confirmed that 5 million gas masks were made at Cadbury's factory at Bournville, Birmingham in WW2, so there is a very strong link with this activity and those at Baxters Rubber works. I don't suppose that I will find any more out about my father's contribution whilst based at Leyland, but I am grateful that you have been able to establish this connection.

I have done a Google search and discovered that in WW2 J E Baxter & Co "in conjunction with Leyland and Birmingham Rubber Co and the Ordnance factories produced inflatable craft, barrage balloons, dummy tanks and gas masks".

If you have access to any other relevant information concerning the gas mask production period I would appreciate you sending me further details. 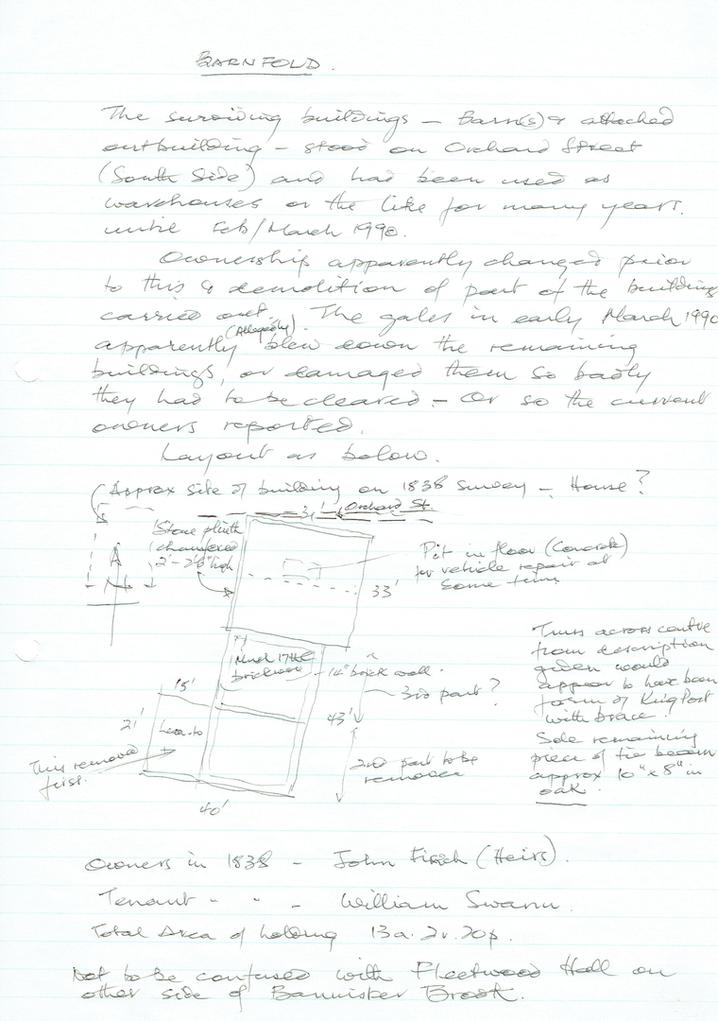 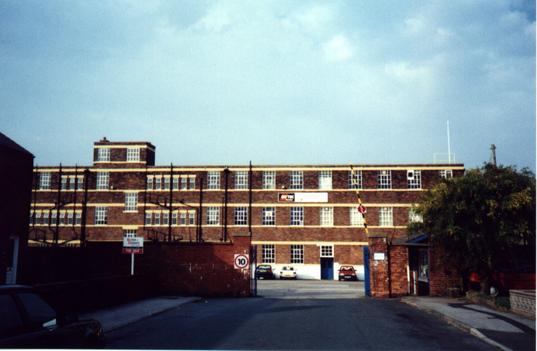 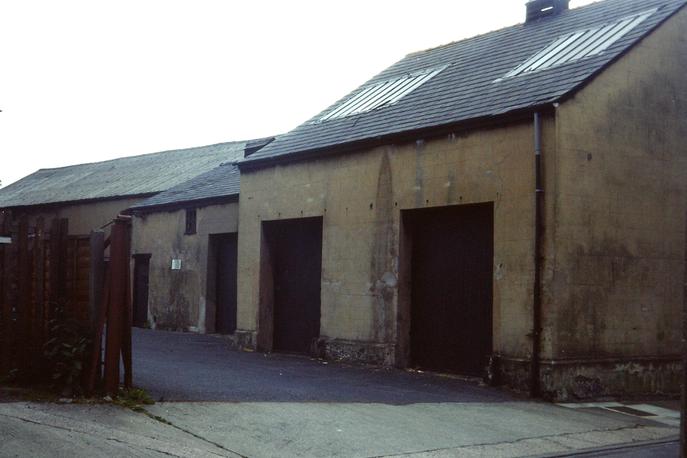 PS. Do you know whether there are any Leyland's still living in the town. My ancestor left in the 1860's and the last of his family still in Leyland died in 1906. (His siblings who remained in Leyland died without issue.

Owners in 1838 were the heirs of John Finch, the tenant was William Swann

The surviving buildings – Barns and attached outbuildings stood on the south side of Orchard Street and had been used as warehouses for many years until Feb / March 1990.

The gales of March 1990 apparently causing so much damage the remaining buildings had to be demolished as they were unsafe.

Here we will show some of the queries the Society have received and how we have managed to answer them.

Historical Society reply - Thanks for the comments
Do you know where Barnfold Cottage was?
I do have a record of Barnfold off Orchard Street on Chapel Brow in Leyland.