To begin the 48th season, the ninth in the Civic Centre, we returned to the subject of Leyland from another different angle, this time with “A Moment in Time” a trip along the old festival route from the starting point on Centurion Way along Stanifield Lane, Preston Road and down into Leyland. With many new “to the members” photographs we have discovered on the way.

This year’s Mikron Theatre production in October was called “Raising Agents” and told the history of the Women’s Institute as they were celebrating their 100th anniversary. Bunnington WI is a bit down-at-heel. Dwindling membership means they can barely afford the hall, let alone a decent speaker. So when a PR guru becomes a member, the women are glad of new blood. Initially.

The milk of WI kindness begins to sour when she re-brands them the Bunnington Bunnies. They’re hopping. With stakes higher than a five tiered cake stand, a battle ensues for the very soul of Bunnington, perhaps the WI itself! On the threshold of one century into the next, this tale of hobbyists and lobbyists asked how much we should know our past or how much we should let go of it. Above all else, like the WI itself, Raising Agents is a story of friendship. 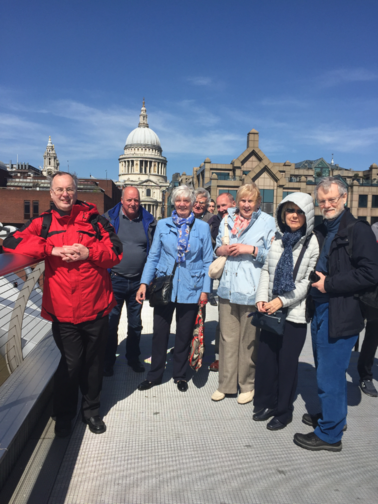 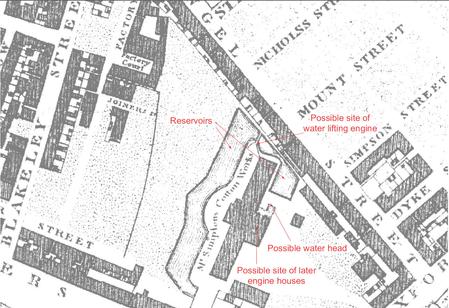 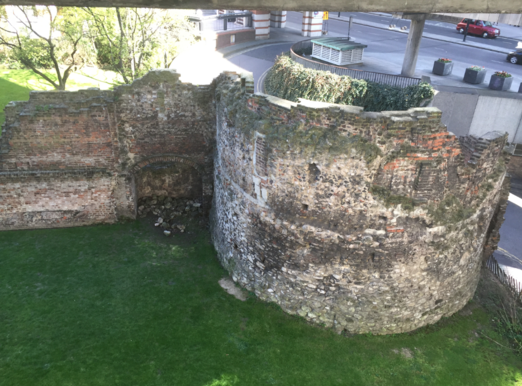 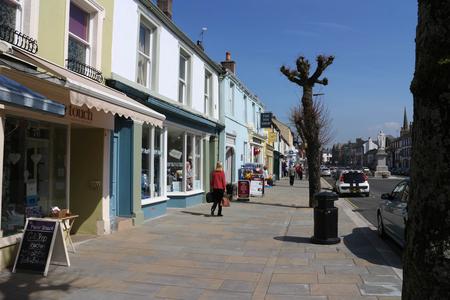 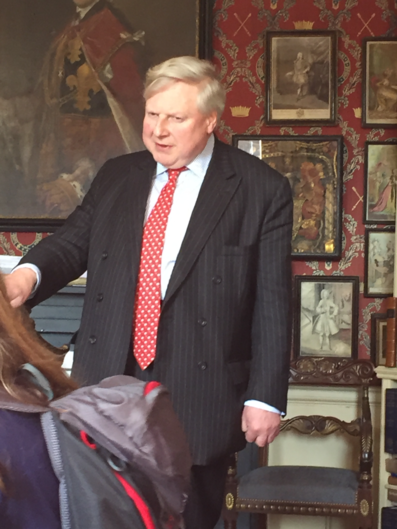 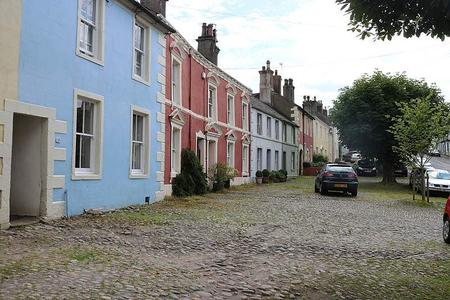 The four cast members managed to pull off being the ladies very well especially when the two males had to pretend to be males dressed up as females, very confusing but fun to watch. The attendance that night of 207 with 84 visitors from the various local women’s institutes making a very successful evening.

In November, we welcomed back our old friend Doctor Alan Crosby with his talk on the music to be heard and the instruments played in Rufford Hall in the 1730s. The information being obtained from the list of belongings following the death of one of the Hesketh family. From his researches he has located examples of the sounds of the instruments which he could play on the computer and discovered that for the age, the late Hesketh was up to date with the sheet music he had obtained from Italy and other parts of Europe, not long after they had been published.

For the December meeting, Lizzie Jones, returned again to her acting as she entertained us with a new drama presentation on the life of Lady Margaret Beaufort, the first Countess of Derby. Better known as the mother of the future Henry VII, her story being told in two distinct ways, without the mask, Lizzie told her story as Margaret saw it, with the mask it was how the other members of the royal family and observers at the time saw her story.

For the first talk of the New Year, we welcomed back Chris Wild from Oxford Archaeology who talked about the recent excavations at Arkwright’s Manchester Mill.  This was the first example of a large purpose-built mechanised cotton spinning mill in Manchester It was built in 1782 by partners of Richard Arkwright, and destroyed by fire in 1854, rebuilt and finally destroyed during the Manchester blitz in 1940. Following on from the famous Time Team dig, Chris and his team discovered many more features of the mill and its water power that still lay beneath the car park (no kings here).

With February we again saw Sid Calderbank at his best with songs, poems and recitations that made up a Lancashire Garland, entertaining and as usual getting the membership to join in. Though the tale of how he sung to Dame Shirley Bassey on the One Show was priceless.

In March we were entertained by Andrew Gill, returning after twelve years, with his magic lantern. Andrew Gill is a professional magic lantern showman, based in Lancashire, who works with museums and festivals. He presented an authentic magic lantern show entitled “The First World War through the Magic Lantern” which showed the full story of the war, from the battles, troops, and even the lighter side of the campaign.

The April meeting featured the story of Steve Halliwell and his work investigating both local and family history, with funny stories on the way.

The events of the special second meeting on 11th April about the Leyland & Birmingham Rubber Company are covered on the pages of this website though it did lead us to have an article published about the Society in the Lancashire Evening Post, the day after the event.

On 20th April, a group of 14 members headed south for the day by train to London to meet our most famous member, Thomas Woodcock, who had agreed to show us around the College of Arms during the offices opening hours. Having arrived in time at Euston we took the Underground to St Pauls, then circumnavigated the outside of the cathedral to Peter’s Hill.

Here as we headed down to Queen Victoria Street and the College of Arms I could not help thinking of a famous 1960’s episode of Doctor Who were the Cybermen walked these same streets with St Paul’s in the background, being recreated for the recent 2014 series finale.

As we were half an hour early we continued down Peter’s Hill eventually arriving on the Millennium Bridge and crossing over to the Tate Gallery in the old Bankside power station next to Shakespeare’s Globe.

We then headed back to the College of Arms entering through the imposing gates and up the steps to the entrance lobby which used to be the court for the college to hear cases. We met Thomas who entered through the same entrance we had just come as his offices have a different entrance as we discovered later. So after he had described the lobby / court with all its paintings and historical artifices we went through to one of the interview / meeting rooms where Thomas explained the running of the College before we entered the research room.

Here we were astounded as at first Thomas opened one cupboard locating the details for the Leyland area almost immediately with all the details of the coats of arms of all the nearby landed gentry, going back before the Great Fire of London, (their records being saved as a matter of urgency). He then opened another cupboard in which was stored all the relevant correspondence relating to the coats of arms and family history which in Leyland’s case meant letters from our first historian, Dr Richard Kuerden ( I just wished that Presidents George Bolton and Bill Waring could have been there to see it).

We then trouped out the main entrance and into Thomas’s private entrance for his rooms as the Garter King of Arms. Here in his large office with books all around the room (as seen recently when Penelope Keith spoke to him on her Channel 4 documentary), the main feature was his desk with a large imposing chair on the visitors side. This is where he sits the future peers to make them feel more important.

He then showed us one of the latest grants of arms with its official seal ready to be picked up later that day. He then answered any questions that could be thrown at him by us and Doreen and I promised to return with the scouts as previously agreed.

The group then caught the 100 bus which was supposed to take us to Little Britain but instead due to a diversion we found ourselves near Liverpool Street Station. Using my innate mapping skills and the London Underground map we found that by walking down London Wall (that’s a street, as is Little Britain) we soon got to the Museum of London which you enter on the first floor by escalator.

Here we spent a couple of hours looking around the various exhibits from the Roman, Medieval and all the years following though the Fire of London exhibits were particularly interesting. A short walk down St Martins Le Grand led us to the Lord Raglan pub which look packed from outside but when we got in there were two large tables set aside for us as previously arranged. Following a good meal we carried on down St Martins Le Grand until we reached St Pauls underground station and returned to Euston for the train home.

On 2nd May we set off north leaving the wet weather behind as we headed towards the Lake District. One first stop was at the town of Ulverston to visit the Laurel & Hardy Museum. We were welcomed by Mark, the grandson of the original curator and collector, Bill Cubin. He took us into the museum and gave a brilliant talk on the museum’s history and the story of Laurel & Hardy before proceeding to show two shorts of the boys in action. The members were then able to wander around the museum for the next hour to see all the various displays about the original comedy double act. One fact I loved was that at one time they were almost making one film per month.

We then all got back on the coach for the trip north up the coastal road (A595) from Dalton in Furness following the ins and outs of the coastal estuaries closely following the Cumbrian coast rail line. We passed the small villages of Foxfield, Bootle, Ravenglass and Drigg before we approached the outskirts of Seascale and Sellafield, the road becoming wider from then on. Reaching the coast after St Bees Head, we saw the port of Whitehaven passing through Parton and the suburbs of Workington we finally reached our destination of Cockermouth.

There at the information centre we met our guides for the afternoon from the Cockermouth Civic Trust who took us around the town in three groups. From where Mary Queen of Scots stayed on her way south, now demolished passed many signs of the recent floods and the ways that they are trying to ensure it does not happen again including a water powered rising wall which worked last winter but unfortunately just moved the problem further downstream

The floods stem from Cockermouth being the confluence of the slow moving River Derwent and the faster flowing River Cocker. Cockermouth Castle is still a home and therefore unable to be visited however we could view the walls from Jennings Brewery.  Walking through the various courtyards with houses on one side and the place of employment made for a very enclosed community though the family home of William Wordsworth looked much grander though it was too late for us to visit. We all again then crossed the River Derwent back to the coach for our return journey southwards via Bassenthwaite Lake and the outskirts of Keswick and then down the M6 home.

For our final meeting of the season in June, we again welcomed Peter Cunliffe who gave a full description of the Battle of Agincourt. Starting with the development of the bow and arrow which was the main weapon of the battle, he went back to prehistoric times to show how it developed. He then went through the early stages of the Hundred Years War and how Henry V came to be at Agincourt, detailing who were fighting on his side and who were the opposition. Discussing tactics he showed that whereas Henry could inspire his troops, the French seemed to have an every man for himself approach as the landed gentry got themselves on the front row of attack to hopefully grab a good hostage for ransom later.

Doing through the various actions of the battle, it was very clear that Henry V and his tactics would have won the day though the antics of the French duly helped their cause. But as a postscript of course, the English would eventually lose the war. 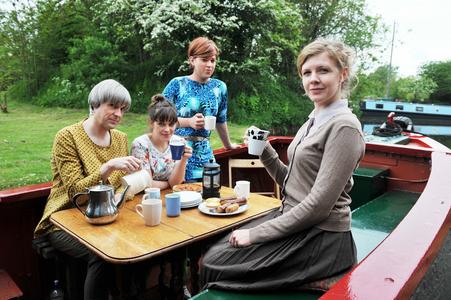 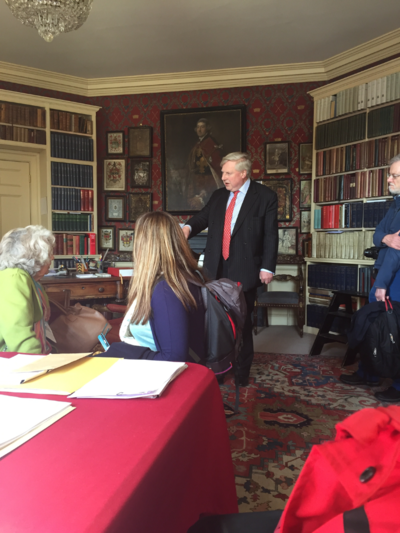 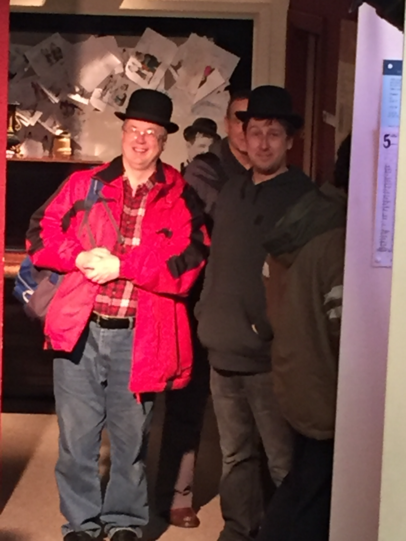 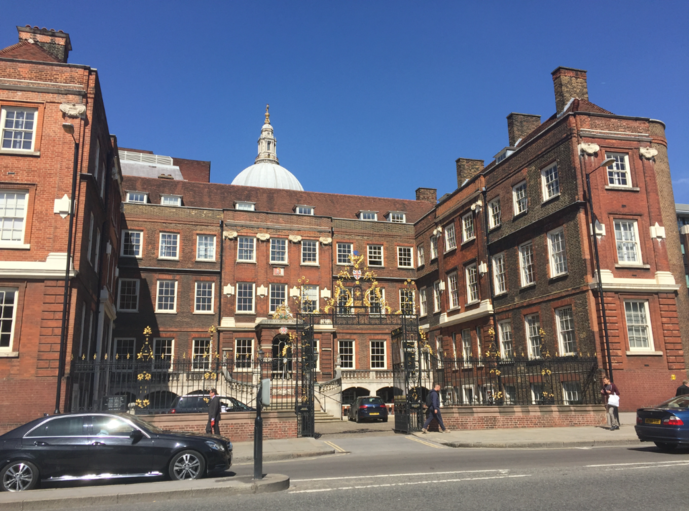 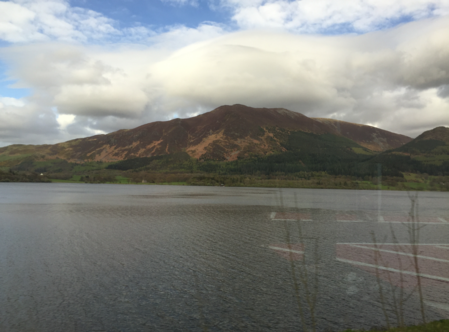 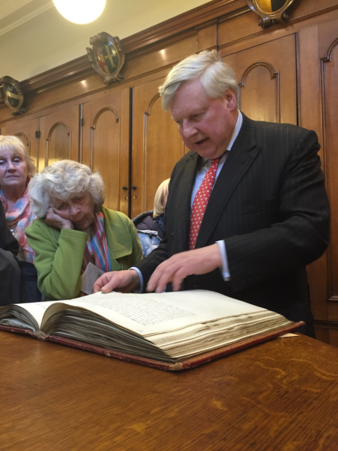 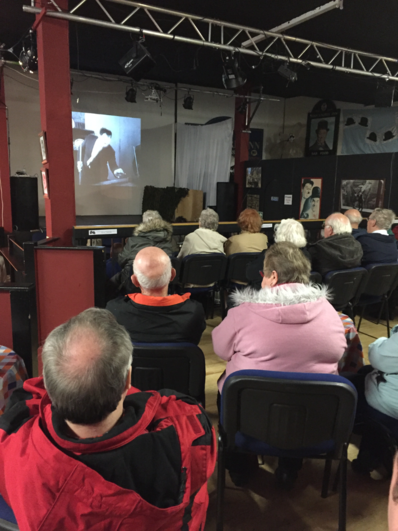 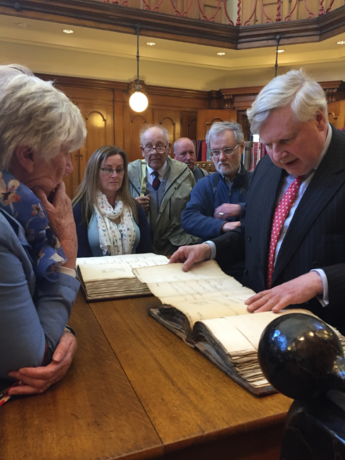 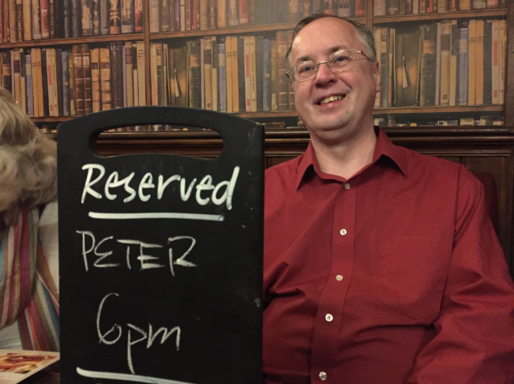 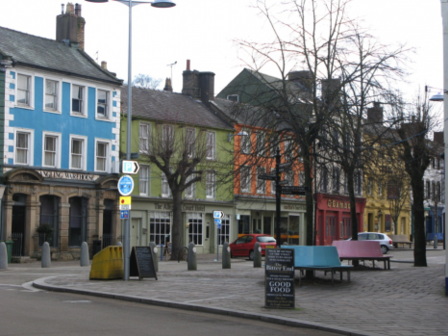 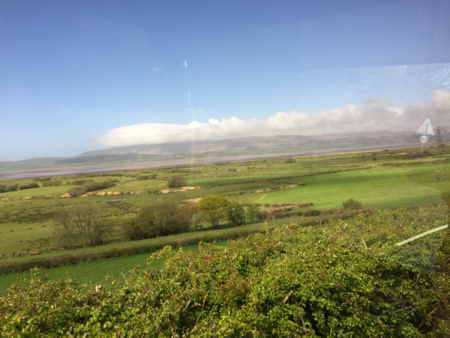 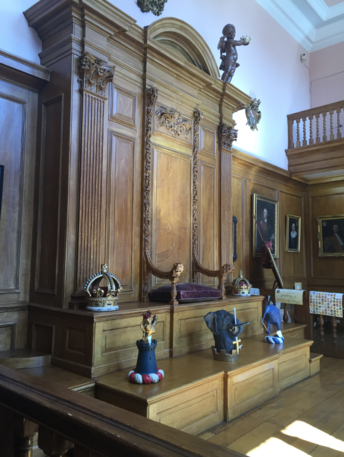 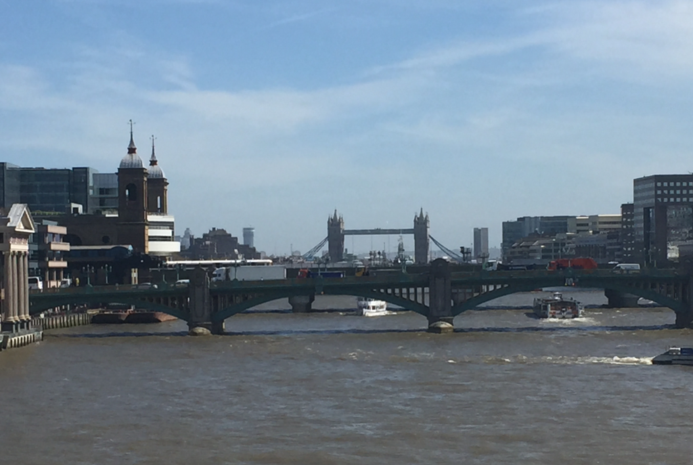 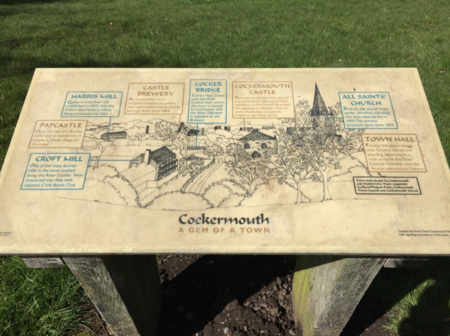 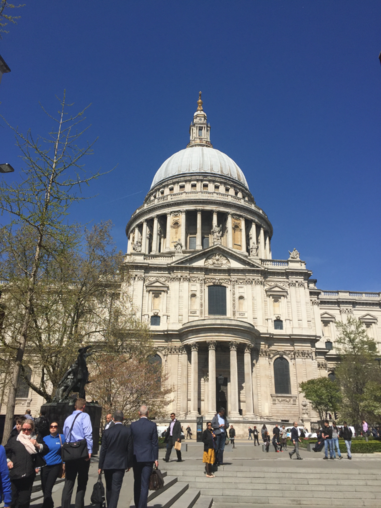