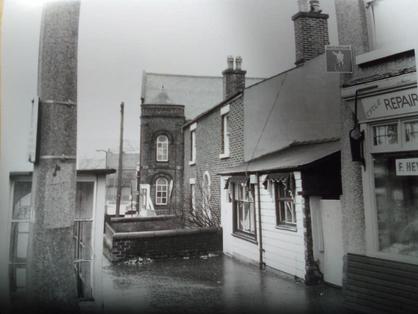 When I said goodbye at the end of the March meeting we did not know what we had in store, so looking back at the last year it has definitely been historic though not in a good way. Whilst we have managed to keep in touch with most of the members over the last year via email, 148 out of 176, it is not the same as the meetings in the Civic Centre.

Following numerous Zoom Committee meetings and after consultation with the Civic Centre over social distancing and risk assessments, the Council continues to have sole use of our usual meeting room until further notice. The Society however has continued to use Zoom for meetings and committee meetings.  In the first official one on the 7th July 2020 with 25 attendees, I gave everyone a tour around the Society’s website, by sharing my screen I showed all the facilities that you as members have access to, the site   currently stands at over 250 pages of information, and which was being highlighted each Sunday on our Facebook group and Leyland Memories.

On 3rd August I invited anyone who has ever wanted to find someone in their family tree to give me as much detail as you know and I will try to find out more live on screen using the Ancestry website, the free Birth, Marriage, Death, and the Lancashire Parish Records site, so long as they were born prior to 1939.

Whilst I was still transcribing the stories just kept on coming and in the number I have interviewed is now 253 so at the Zoom meeting on 7th September I gave the members an update with recordings and photographs which are telling the stories of Leyland and its industries.

For our meeting on 5th October we should have had a new Mikron show to enjoy but unfortunately last year they had to cancel their whole season so for this Zoom Meeting we were joined by Marianne, Mikron’s Artistic Director who gave the members the background as to how they were coping in the current situation, their plans for the future and a look back at some of their successes with some funny stories too. This together with some videos from past cast members including Mark Williams made for a fun evening and as I said everyone was in the front row.

For the Zoom meeting on 2nd November through the Zoom share screen option the members  explored the Society’s collection of aerial photographs and see if there is anything you can spot you haven’t seen before, from the earliest in 1929, through the post war 1946, 1951 and 1970 collections to the historic setting on Google Earth that can now take you back 20 years to 2000.

The December meeting on the 7th was all about the various maps of Leyland, from the earliest Speed map of Lancashire through all the Ordnance Survey maps to the Google tracking of today.

As we started 2021 with another lockdown, we were lucky that the first three meetings could go on normal though only on Zoom so Monday 4th January saw Chris Wild giving up his annual archaeological update from the comfort of his kitchen table. We visited many venues though the former swimming baths near Piccadilly Station in Manchester was a particular favourite, especially when in the following weeks it featured in the Observer newspaper and Look Northwest, we saw it first.  As usual Chris kept the best till last as he was about to start work on the Farington Lower Hall site down Hall Lane in Leyland and he will give us a full report in next year’s update.

For the meeting on 1st February, traditionally Sid Calderbank night, when I asked Sid if he could do Zoom, he said no, but suggested that his partner in crime, Mark Dowding was much more tech savvy, so Mark performed a two-hour set on Zoom which included the voice of Violet Carson, Ena Sharples of Corrie fame, to you younger people, performing one of the songs.

As Doctor Alan Crosby has now adjusted to a Zoom meeting life, on 1st March he gave us Place Names in the Landscape in Medieval Lancashire and discovered where those interesting names came from. I liked the idea that posh Fulwood derides from a fowl smelling wood.

As Sunday 25th March was Census Day, I made a rash promise on the Society’s and Leyland Memories Facebook sites, namely on that day I would research on the Ancestry website anyone’s parents or grandparents or relations who appeared on the 1939 Register. Note that this wasn’t a Census it was a quick survey taken on the 29th September 1939 in order for the issue of Identity Cards and to ascertain the working population and their capabilities on the outbreak of war. This survey would later form the database from which the National Health Service would use as their records until computerised in the early 1990s.

The 25th March proved to be remarkably busy as I received over 108 different requests for information, having approximately a 75 % success rate, as some would have already had been called up and of course anyone who is still alive, their records are still closed. So when it came to the meeting on 12th April I thought I would repeat the research for our members and this time it was a more manageable dozen requests including finding a children’s home in South Manchester which I then found the site on the National Library of Scotland’s website for maps.

When the May trip was again cancelled until next year, I though on the 3rd May to take the members on a Zoom meeting trip through the National Library of Scotland’s website to all points in the British Isles especially the unbelievably detailed maps of London and the lately added Town Plans which are currently only showing in the Southwest but handing in the right direction.

Finally on the 7th June we decided we would try and meet up outside and having previously tested the route out with the 1st Bamber Bridge Cub pack, Elizabeth and I took twenty-nine members and a dog around the historic site of Worden Hall and the Park ending up at the Folly at Shaw Brook before walking back to the car park.

The next walking meeting is on the 5th July see the Meetings tab for the details.

​A recent photograph i have discovered which shows the blue bus shelter on Turpin Green Lane in which i waited for the 7.45 am 119 Fishwicks bus to Chorley every day for twenty one years from 1973 to 1994.