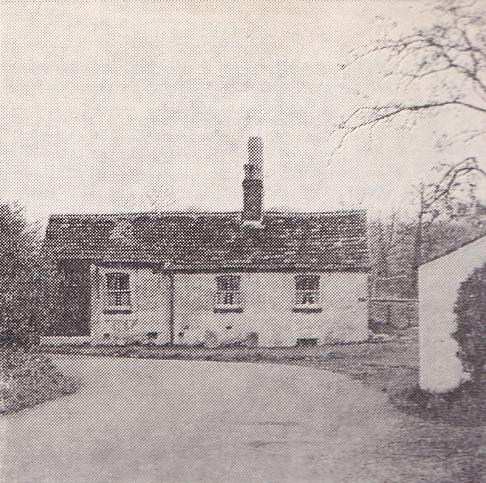 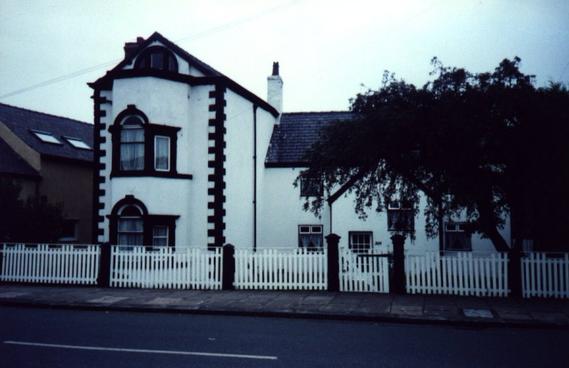 This was previously the home of the Crooke family, these not to be confused with the Crookes at either Firs Farm or for that matter at Crooke Hall in Clayton.

The house and barn were for many years  associated with the Robinson’s Ice Cream business. 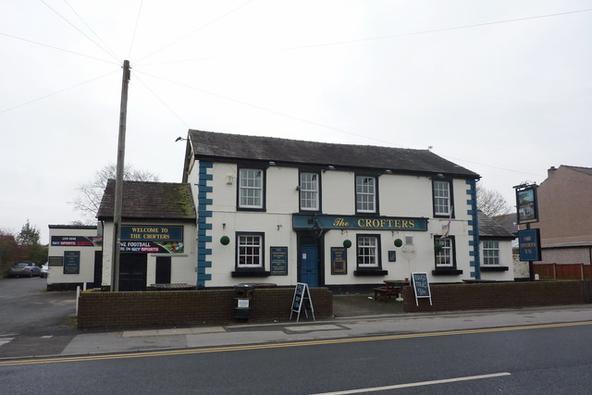 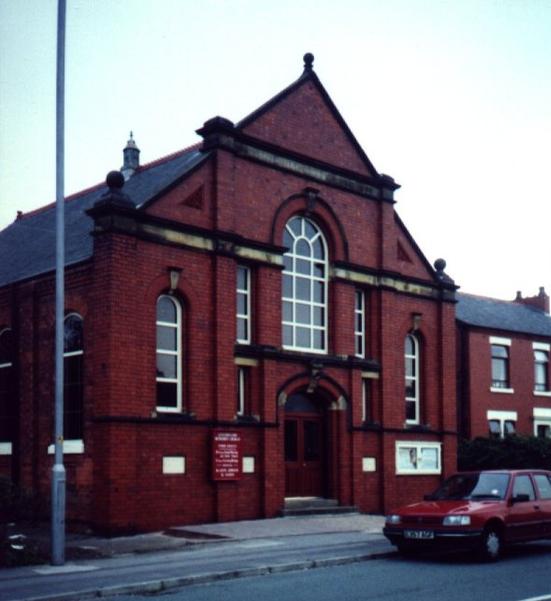 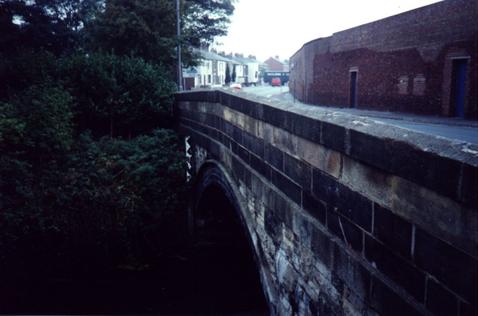 This public house, which takes its name from a job in the bleaching and dyeing trade, was given this name by the mill workers of Leyland.

The pub used to open at 6 am to catch the night shift coming from John Stanning’s Bleach Works. Mr Robinson, the landlord always having twenty pints lined up on the bar.

From the milestone opposite Peacock Hall to the Wheatsheaf Hotel close to Earnshaw Bridge, where the next milestone is situated, is exactly a mile. This road was part of the Penwortham & Wrightington Turnpike Road Trust.

According to the 1844 Map, many buildings were featured along the route of Leyland Lane including the original Wesleyan Methodist Chapel, the Farington Alms houses in their original position, Atherton’s House, Langs House, Pole Houses, Straits, Jackson's House, Old Crook and New Crook.

By the time of the 1896 Map, the Farington Alms houses had been moved to their position on Fox Lane, while the Mount Pleasant Mill now dominated the Seven Stars area. The small terraces and odd houses were now beginning to fill in the gaps along Leyland Lane. 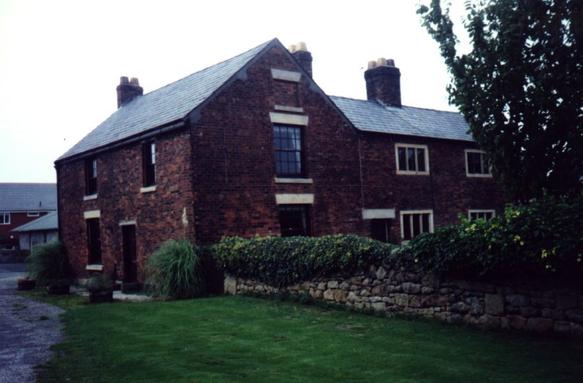 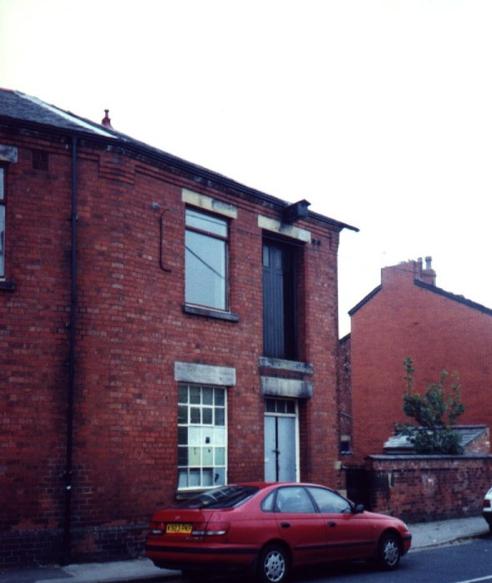 This was formerly the home of Samuel Crooke, a well-known local benefactor who lived in the property between 1740 and his death in 1776.

His many charitable acts included the building of a school on Slater Lane as well as donations to schools in Leyland, Euxton, Croston and Whittle le Woods. This farm has a barn dated 1839. 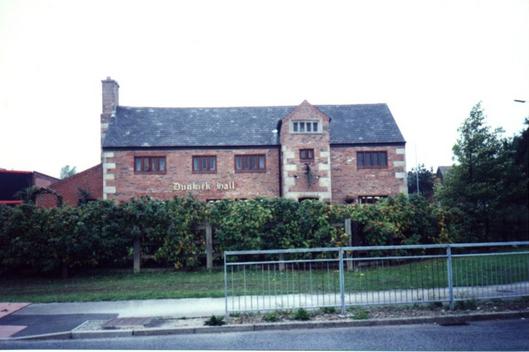 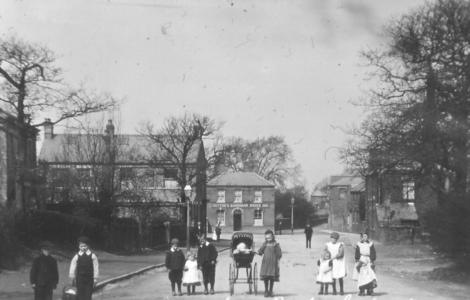 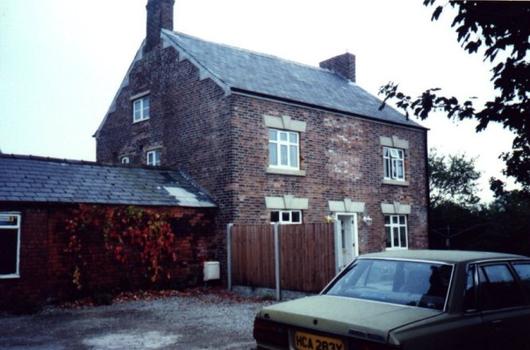 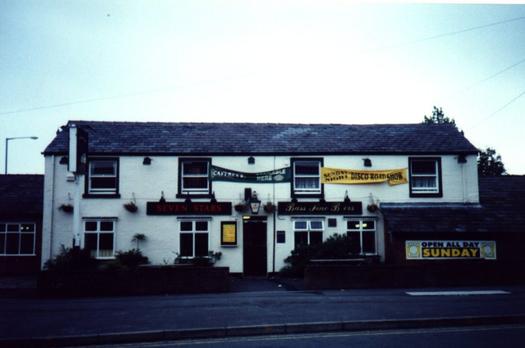 In 1829 preaching services were held in a chapel on the west side of Leyland Lane, this chapel was known as the Wesleyan Methodist Chapel. When this chapel was closed it was sold and converted into two cottages.

A new chapel was opened in 1869 on the site occupied by the present chapel, but this soon proved to be too small for the increasing number of followers. Consequently, the present chapel was built and opened on June 4th 1893, on the same site at a cost of £ 1028. This has seating accommodation for about 300 people.

When the Methodist Church decided to merge with the Midge Hall congregation in 2007, the Greek Orthodox Archdiocese of Thyateira and Great Britain moved from their temporary  home at the Galloway Hall in Preston to Leyland on July 23rd 2007.

It took a few hard working people about six months to convert the basics of the church building.  As the previous internal layout was unsuitable for Orthodox use, this involved a complete stripping out, laying a new flat floor, building an apse and altar area and general repairs to walls, etc.  Gradual finer developments took place over the following six months whilst we were using the church and wall and iconostasis paintings are still continuing.

Langs Hall is a brick building with a projecting gabled porch and has a curious two storey wing projecting at right angles on the left side. The building is plastered with stone corners, the gable end with stone copings and a slab roof. There is a semi - hexagonal bay ground and the first floor each with Venetian windows, following the line of the bay.

To the left of the building at the rear is situated a red brick barn with a hipped roof, bearing an oval stone plaque which has the initials " R.M.L. 1776 ". Though the brickwork would suggest that the house is of an earlier date.

This was a Farington property, Robert Lang appears to have been employed by the Farington family between the years of 1756 and 1778, and his name being featured on many of the Farington family papers of the period. There was also a communion cup, which was presented to Leyland Parish Church by Mary Lang of Langs Hall.

The 1819 survey shows that the Hall, cottage, gardens and orchard were just over nine acres, the valuation being £ 38 4s 2d. The hall was being occupied in 1838 by Thomas Hutchinson who was listed as a farrier. 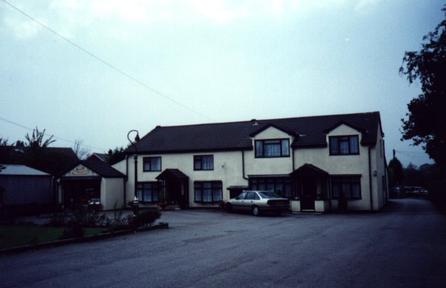 The public house with a Datestone of "I.I.A. 1686" arranged in the form of a triangle, the top initial being the surname, while the other two initials being the Christian names of the husband and wife in residence. The first instance recorded of its use as a public house only occurs in the Census of 1871. This public house was the last to brew its own beer, with horse stables at the rear.

Between the public house and the mill where the row of shops are now situated was the site of the six old alms houses built in 1691, before being pulled down and rebuilt in Fox Lane by Misses Susan Maria and Mary Farington in 1849. Along the side of these houses was the village pump. 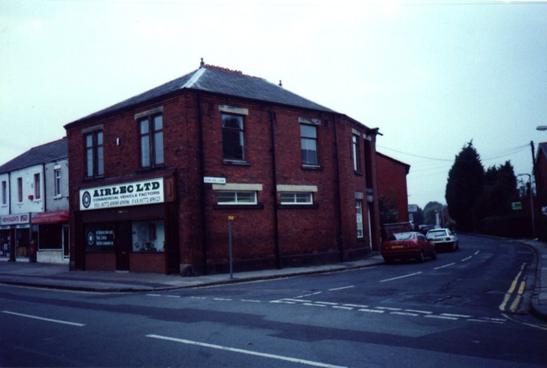 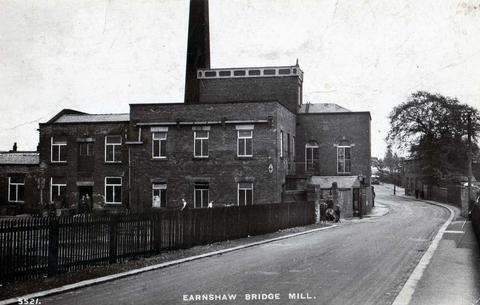 This public house has seen many changes since it first appeared in the 1871 Census as the " Earnshaw Bridge Inn ", a 19th century alehouse or beer house rather than a hotel. The pub becoming " The Leyland Tiger " following the development of that particular Leyland Motors vehicle. However in later years the brewery became confused with the pub sign showing the animal.

The pub then became " The Hippodrome " before reverting to the Tiger name though this time the brewers did display the correct " Leyland " name. Unfortunately this was not a good omen, for following closure in the mid 1990s it was demolished and replaced by a housing development. 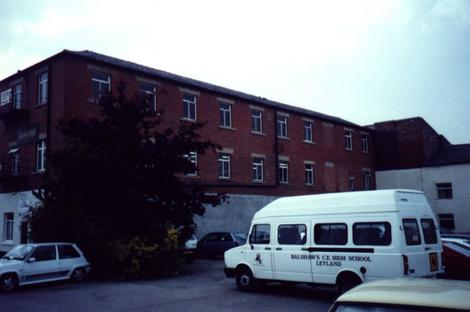 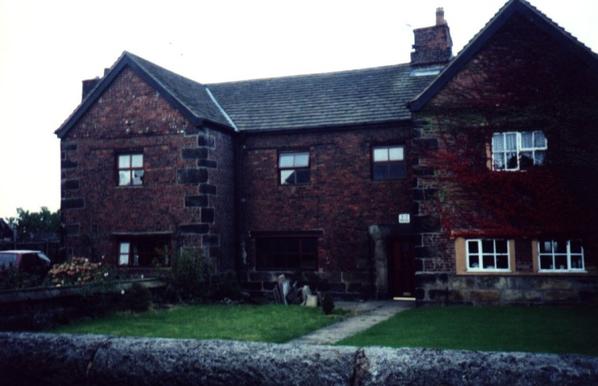 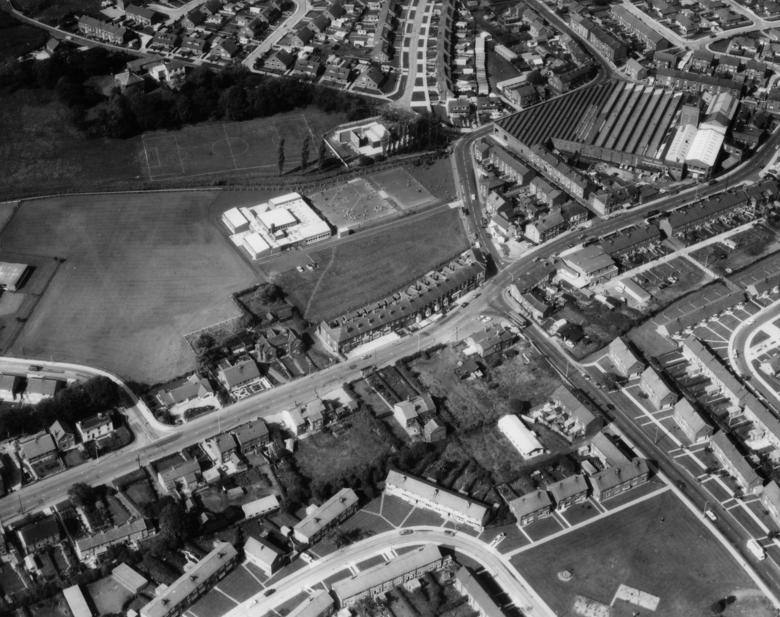 Standing on the west side of Leyland Lane, Peacock Hall, a Grade II listed building, is a fine example of a substantial early 17th Century house. Despite being split into three in the middle of the 19th Century, it still retains its individuality.

At one time the hall had wide mullion lead glazed windows and the datestone states " IS 1626 “, the I being the Roman J. It has been established that the land was probably bought by John Sumner, the steward of the Farington estate in 1620 from his employer William Farington of Worden and built Peacock Hall on the site. By the time of the 1664 hearth tax, the family in occupation was that of Paul and Jane Morae, while in 1785, the owner was Richard Wilding, followed by a Miss Bateson in 1795. From 1800, the owner was a Robert Weaver, the property being known as " Weavers ".

The first reference to the name of Peacock Hall occurs in the Census Return of 1851 by which time the house had been divided into three dwellings. The splitting up of the house occurred between 1838 and 1841. Behind the house, two of the fields were known in 1838 as Moat Meadow and Little Moat Meadow giving rise to the idea that this was the site of a moated manor house, which now seems unlikely.

Earnshaw Bridge in the 14th Century appears as " Ereneshaigh " which Ekwell in his book of place names gives the meaning as " the Haugh of Earne or Earn ". A Haugh signifies a level piece of land of culimated ground by a stream, which in this case was owned by a man called Earn, the old English name for eagle. The stream in this case is the River Lostock, hence the name Earnshaw.

After inspecting the buildings around the Leyland Tiger junction, the walk heads east up Golden Hill Lane, which does live up to its name, be warned. 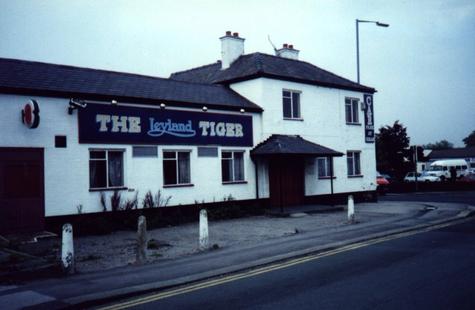 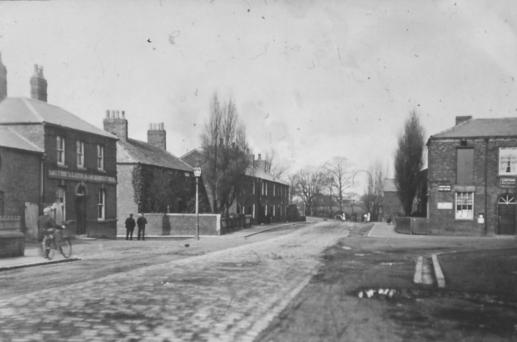 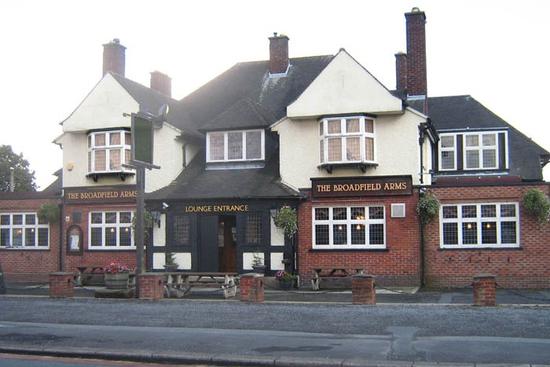 Situated at the end of Shawbrook Road, east of Leyland Lane, this was the home of the Butler family in the 17th century, though by 1837 it was occupied by John Beatson.

Following the changeover of the mill from an old sawmill to cotton by a family called Mackrael; the mill was taken over Mr Edmund Berry and Mr Pilkington in 1871, who also owned the Earnshaw Bridge Mill. By 1939, there were 1113 looms operating at the mill.

It is now the home of Leyland Printing Co or Leyprint as it is now known.

A short detour up Dunkirk Lane leads to Dunkirk Hall at the junction with the easily pronounceable Schleswig Way. 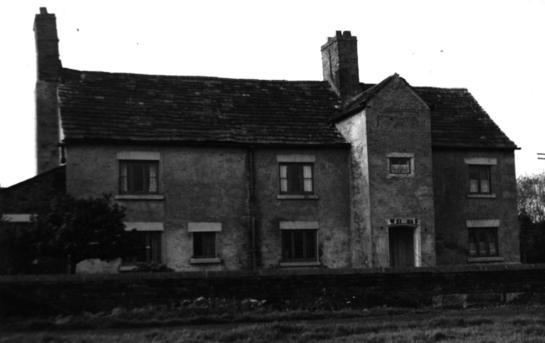 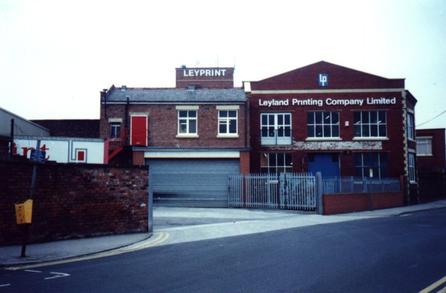 Located on the corner of Cowling Lane, this busy store built in the 1920's had a big order trade. Two boys cycled the country district of Moss Side and Ulnes Walton twice a week taking orders which were then delivered by horse and cart. In the 1930's a George Woodley was manager here followed by John Staples. On the other corner of Cowling Lane was a Co - op drapers with Nellie Baron, the manageress. The small shop next door, which is now a vet, was a boot and shoe repair shop and cloggers.

Cowling Lane was previously known as Cowling Hillock, which takes its name from Harry Cowlenge who bought this land in 1583, prior to this it was called Lostock Brow. The River Lostock was crossed by hipping stones or stepping-stones.

Where Broadfield Arms is situated there was an old farmhouse called Baker's Farm, which was badly damaged during the war in 1940 by a bomb.

When the public house was built, it was the law that new pubs had to take over the licence from a pub that had closed, hence the present day drinkers of the Broadfield Arms have the disfranchised patrons of the Clyde Arms, Dark Lane, Mawdesley to thank for their place of refreshment. 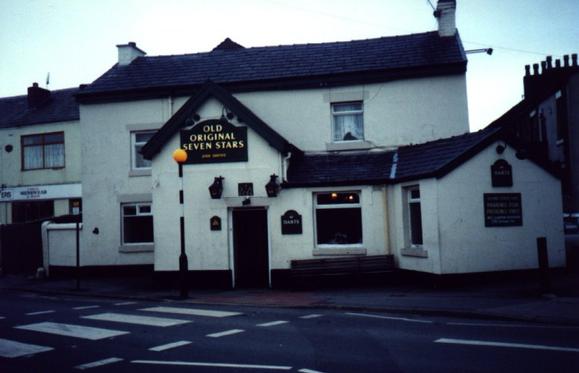 The trustees of the Penwortham & Wrightington Turnpike Road Trust held their annual general meeting here in 1847.

Dunkirk Hall, a Grade II listed building, is situated close to the River Lostock in Dunkirk Lane, being built in the reign of Charles I. The hall was originally known by the name of Lostock Hall and owned by William Sumner and his descendants through the 16th and 17th century. In the Michaelmas 1664 collection of the Hearth Tax, " William Sumner of Lostock " paid for six hearths, the only properties with more being Worden Hall with 16 and Charnock Hall with 7 hearths.

The name Dunkirk first appears in a survey book of Leyland of 1725, so the name came into use shortly after the Sumners left and Edward Atherton became the new owner. The building was used for many years this century as the offices for Road Springs (Leyland) Ltd., and later Jones Woodhead Ltd, who took over Harry Suttons Road Springs.

It was tastefully renovated with the cement coating being removed when the building became Leyland’s then newest public house in 1983. The large fireplaces at both ends of the bar area are thought to be of original size if not the actual ones which have been uncovered.

Retracing our steps we continue north on Leyland Lane.

This corn mill dating back to the 13th Century was driven by a water wheel from Mill Brook. The corn miller’s entry in a Leyland directory of 1877 states that Crawshaw Mill was owned by J. Stanning & Sons. The surviving buildings were cleared in the late sixties.

The Mill Brook crosses under Leyland Lane, known on old maps between here and the Broadfield Arms as the Straits, the bridge being widened in 1931. 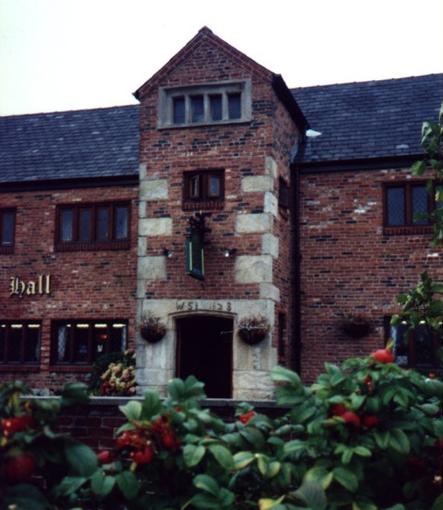 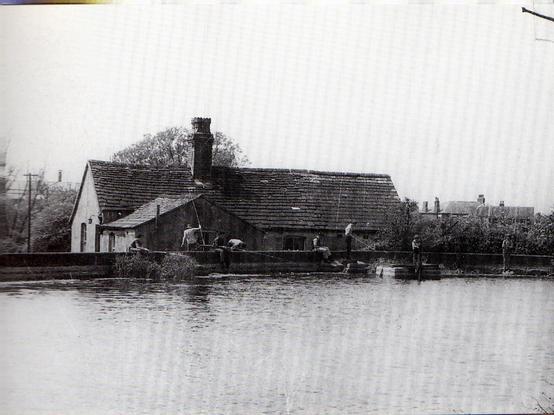 The Mill was built on the bank of the River Lostock by Francis Sergent Pilkington with his son John. They and Mr Berry started weaving in the Earnshaw Bridge Mill in 1845 under the name of Pilkington and Berry. By 1939, there were 771 looms operating in the mill.