As George Henry Wood was discharged from debt which considering that he had died three years previously was a bit academic, perhaps someone who was thinking of using the Wood  name as part of a name for a company rather than just a trade mark could have made sure everything was above board, maybe a solicitor say.

So with both George Henry Wood and John Milnes now dead it’s time to return to the story of the Roberts and the Revolving Heel Company and to see what they have been up to since we left them forming the company around 1897. 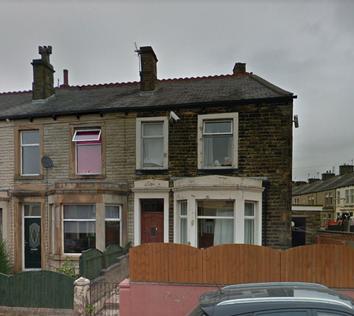 So where was Mr Wood well as I said previously he did not travel very far and yes he was still around Burnley though he was now married to Emile and living at 21 Victoria Road, Padiham which was not as grand a property as Mr Milnes.

So what had he done with his money, the answer lies in the 1901 census with his occupation, Colliery Owner and employer. 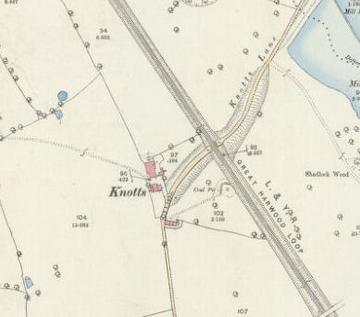 The second was slightly unusual as in the London Gazette of 28th July 1905 there appeared the following.

Though John Milnes hadn’t finished with Patents, at his new home, they kept coming

6th April 1898 No 8189 Improvements in and connected with Shells and War Rockets.

6th July 1899 No 13,939 Improvements in and connected with Sectional Conductor Street or Road Electric Railways, a further refinement of this can be found under 21st August 1900 No 14,906.

3rd July 1900 No 11,970 improvements in lubricating the chains of cycles, motor cars and other chain driven machines.

All these can be viewed on the Espacenet patent search website

​This would be the last we will see of John as he died in 1905, his widow Harriet and the daughters still living there by the 1911 census, Harriet died in 1927 and the last daughter Louisa died in 1965 still living in Southport. 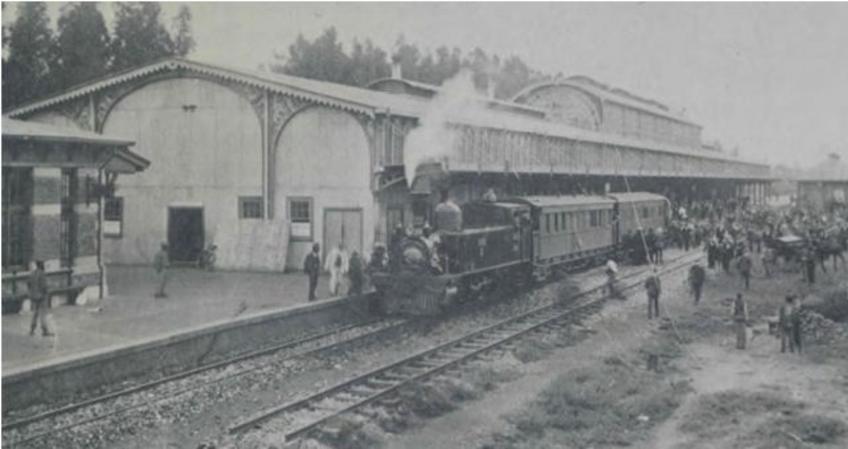 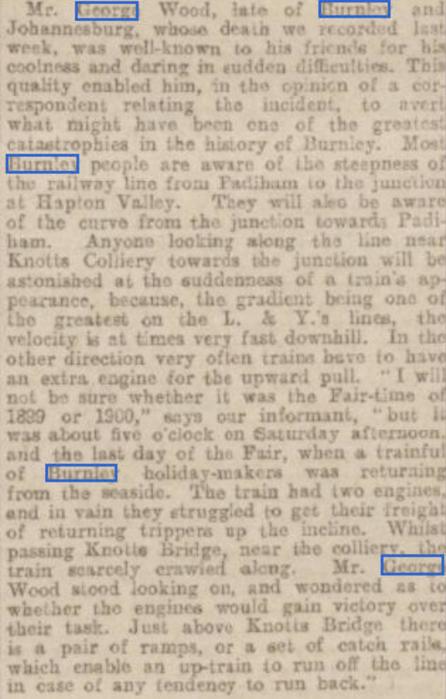 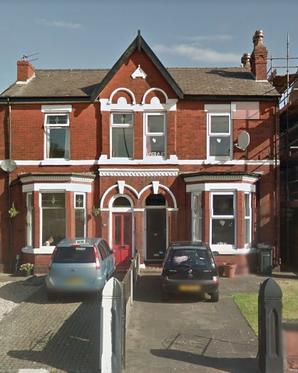 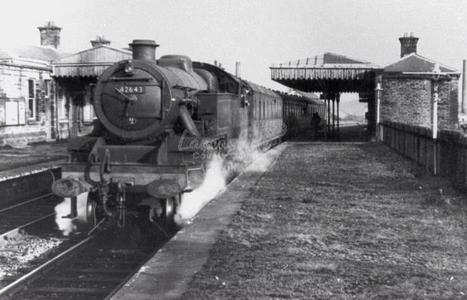 The joint statement of affairs showed gross liabilities amounting to £3, 321 13s 11d, all of which was expected to rank for dividend and there was a deficiency of £3, 311 13s 11d, debtors alleged as the cause of failure.

“The colliery which was leased becoming flooded on two occasions” - In answer to the Assistant Official Receiver, the debtor George Wood said he and his brothers started the business in April 1898 leasing the colliery for seven years, with leave to extend that period if so desired. Their capital was £200.00 borrowed from their mother.

£25,139 in 2020 money - Now we know this last bit of information is very probably not true but why was George lying about where the money came from? Read on.

Previously, debtor had worked for six years at this colliery as surveyor and manager. Under this lease the rent was £780.00 a year (£98,042 in 2020 money) payable monthly. After two months of their tenancy however a flood occurred in the colliery which did them great injury. They continued working however, there was a great amount of coal ready to get, and by getting that very cheaply they somewhat recovered themselves.

After the flood they made a tunnel into a new district and went on very handy until 18 months had elapsed when another flood occurred. This was in May 1900 and after about two months struggling they had to abandon the working, all their plant was ruined. The Knotts Colliery Company had since taken back the colliery.

At the time of the second flood it became apparent they could not pay their debts in full but they contracted further liabilities hoping to pull round. He and his brothers took the colliery purely as a business concern and not as a speculation. There were 100,000 tons of coal in sight when they took the colliery over but most of it was lost by the floods. To the floods and the heavy cost of tunnelling witnesses attributed the failure entirely.

John William Wood and Francis Joseph Wood corroborated the evidence of their brother. The examination was adjourned, Mr A Riley (Messrs Roberts & Rodgers) appeared for the debtors.

Now perhaps it’s a coincidence that Tom Hartley Roberts was a solicitor in Burnley but maybe the price of the legal representation was keeping Mr Roberts senior and his Revolving Heel Company out of the proceedings. The case was closed on 21st December and George Henry Wood was now a bankrupt so what could he do.

So what happened to John Milnes and George Henry Wood ? 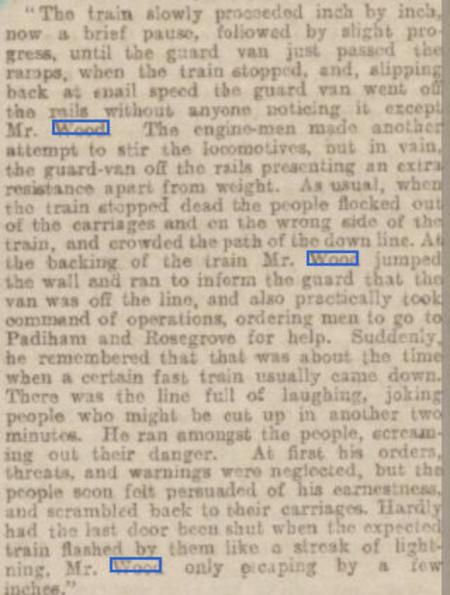 Before we continue with the Revolving Heel Company I feel I should continue with the life stories of George Henry Wood & John Milnes, so what were they up to, well the Milnes family had certainly gone upmarket and moved to 85 Tithebarn Road, Southport and living on his own means at the age of 51 according to the 1901 census.

As the Patent letters had stated earlier he was a Mining Engineer he had probably been on the lookout to invest in and it seems he was already working at this one in the East Lancashire coalfield, one of many pits dotted around Burnley and Padiham, it was called Knotts Colliery, just on the Padiham Loop of the East Lancashire Railway which left the main line between Hapton and Rose Grove.

According to the mine records I have found the pit was opened in 1890 by John Cottier, then between 1895 and 1897 it was run as the Knotts Colliery Limited until 1898 when George Wood and Brothers took over.

After the 1901 census George Henry Wood is not to be found on any official documents again so that led me to the Newspaper Archive which told an increasingly sad story in two articles a year apart.

Death of a Burnley Man in Johannesburg

Many Burnley people will regret to hear of the death of Mr George Henry Wood, second son of the late Mr James Wood, hat manufacturer of Burnley, which occurred at Johannesburg on October 20th. Mr Wood who formerly lived in Padiham Road, Burnley was well known owing to his connection with Knotts Colliery, Hapton and after severing his connection with the colliery he decided to go to the mines in South Africa.

Now it’s either don’t speak ill of the dead or he was a popular man as a further article will show or perhaps someone who didn’t check the previous filed copies of the same paper.

He had three good situations offered to him there, and was one of the selected candidates for the position of Inspector of Buildings for the city of Johannesburg which position he was in strong hopes of obtaining had he lived. He was thoroughly qualified for mining work and took with him a full set of surveying apparatus.

He left Burnley at the beginning of August and arrived in Africa three weeks later. Capetown was at that time in a state of confusion and the young man, he was but 29 years of age, proceeded up country to Johannesburg obtaining his permit after about two days.

The journey was accomplished without any untoward event, but on getting off the station platform which was about 18 inches deep, he slipped and was injured internally, which induced paralysis of the legs. He was taken to his apartments, and after being there about ten days he was removed to the hospital where he remained a month and died on the 20th October.

Only one or two days before his death news was sent to his relatives in Burnley that he was improving, and the news of his death, which was received in Burnley this week caused the greatest sorrow. The deceased man leaves a widow and three children who live in Nelson.

So ends the life of George Henry Wood though there are two interesting postscripts the first appeared in the Burnley Gazette, ten days after the above notice and tells the story of how George Henry Wood had saved many from Padiham from a terrible railway disaster a few years previously, perhaps this is why they didn’t like to mention his previous problems.

Padiham Station prior to its closure, the Padiham Loop is now a cycle track