In order to continue the walk, it is now only possible to enter Balcarres Road by foot by either crossing Canberra Road in front of the garage now Tesco or the new King Street bypass at the zebra crossing, the first building to be seen being Charnock Old Hall.

This row of cottages together with the two further down towards the roundabout were originally built as barns appearing on the 1848 first edition Ordnance Survey Map as the only buildings on Turpin Green Lane.

The terraces built in the late 1890's lead up the hill towards Turpin Green Bridge; they had names including Woodville Terrace and Starkie Terrace. 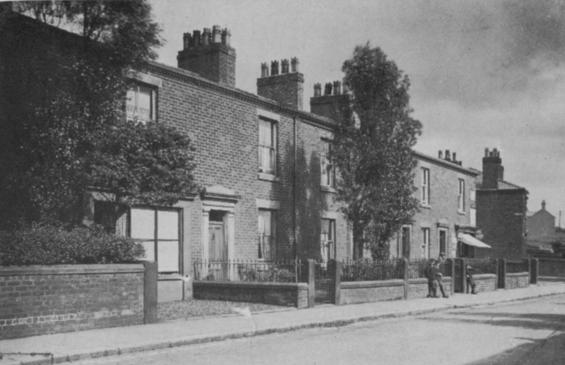 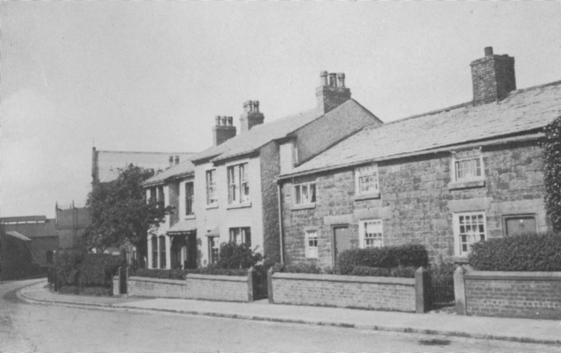 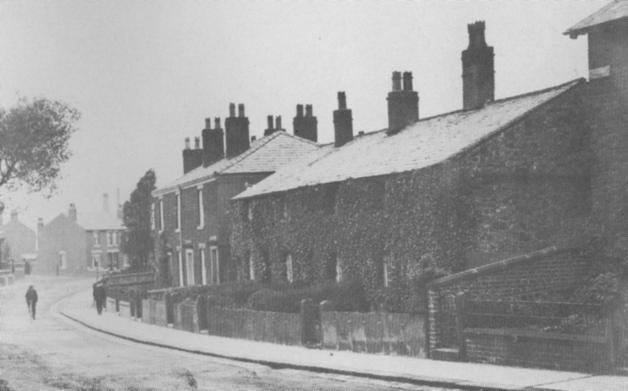 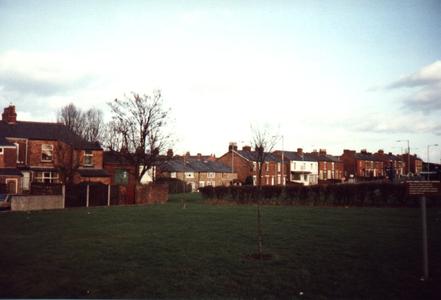 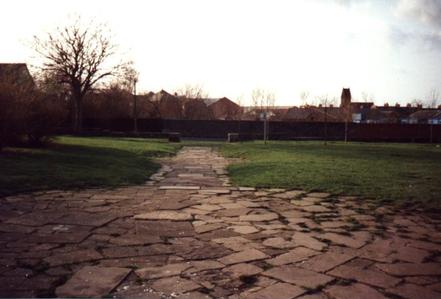 This was formerly the site of a wayside cross opposite Charnock Old Hall. It was also, in the early part of this century, the site of Leyland Baldwin's grand plan for an outdoor swimming pool. The King Street bypass has now covered the green area to the right of the path to Balcarres Road.

The wall on Balcarres Road used to mark the boundary of the Leyland Motors South Works though, when this photograph was taken, the works had been closed down. The extension of King Street was about to commence, the blue huts housing the modern day navvies, while the slogan on the wall, " No four lane road through here ", is now gone for ever. 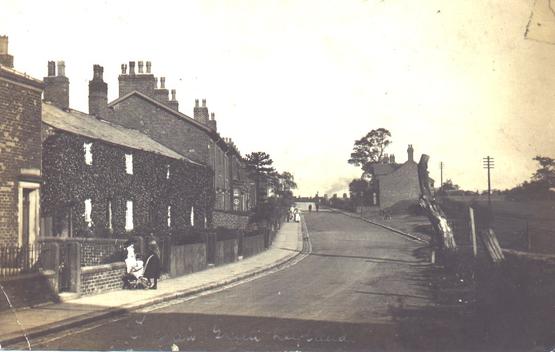 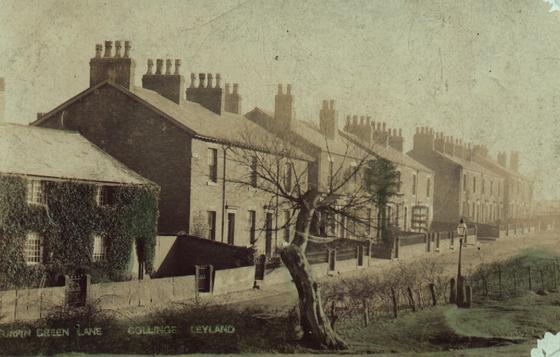 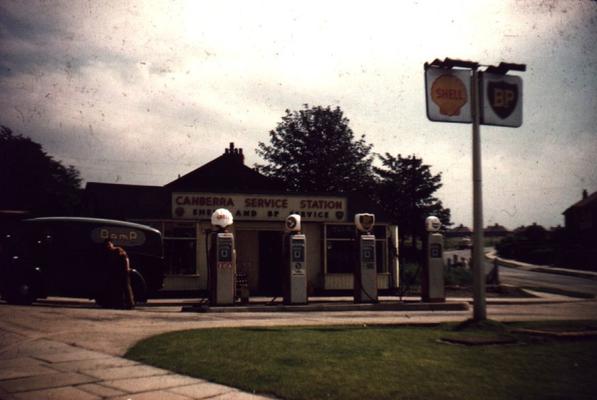 This service station opened in 1950, the owners, George Damp and Sons Ltd., transferring their petrol retailing business from the previous site on Golden Hill Lane when it was bought by Leyland Motors to make an entrance to the Farington Works. In the days before the corporate identity and the branded outlet, it was possible as seen here for BP and Shell to coexist at the same service station.

This was a branch of the family who also ran the former Smithy in Towngate, running an engineering blacksmiths and also a small hardware and ironmongery shop next door. The service station was totally redeveloped and rebuilt over the years until it today covers the original site and the small field behind.

Looking up Canberra Road, the grass area on the left, has now become the Methodist Primary School, moving here from the old school, which was adjacent to the Church on Turpin Green Lane

This rail crossing has seen many changes from the original level crossing complete with a watch house for the crossing keeper in 1838. This was replaced in 1880 when the doubling of the lines resulted in the building of a bridge slightly to the north.

This blue brick bridge lasted until the Motorway link road construction in 1962, required a new bridge again slightly to the north and higher being built. The height of the latest bridge was to facilitate the provision of the overhead power cables for the railway without having to rebuild the bridge again in the early seventies.

The view looking from Bent Lane on the previous page, shows on the left, the houses on the level with the railway though this may have been the site of a group of cottages. The height of the first bridge can be seen in the centre, whilst the new bridge is on the right at the highest level. 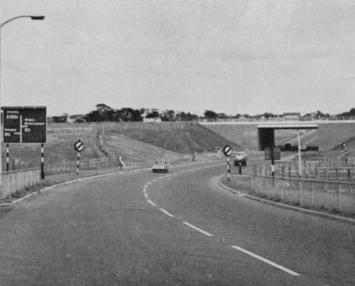 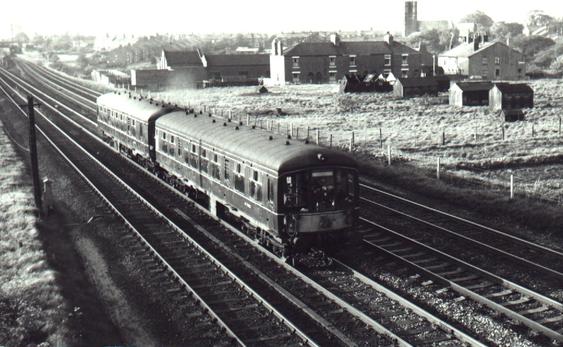 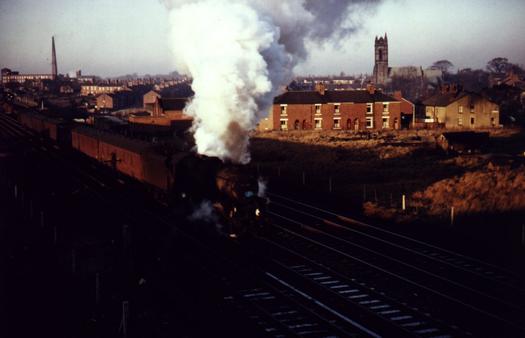 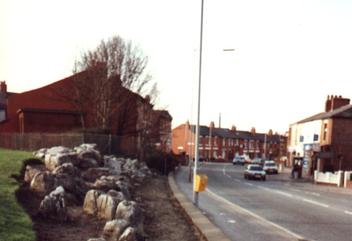 Though some have suggested that Dick Turpin passed through, stayed at or did some other deed around Turpin Green. Unfortunately, the truth is more boring; the name comes from " Turf Pit ", the main form of warmth before coal was successfully mined. Of course, the story of Dick Turpin may have led to the current spelling, though whether we would name a road after a criminal these days remains to be seen.

The only buildings on Turpin Green Lane according to the 1844 Map was a house at the corner of Turpin Green and Bow Lane and the two barns that are better known as the cottages halfway down the lane. By 1896, the terraces on the north side of the lane from Princess Street to Stanley Street had been constructed together with the Methodist Chapel and School at the junction with Hough Lane. However, on the south side of the lane, it was still fields between the railway bridge and Sandy Lane, except for two large houses opposite the entrance to Princess Street.

While Turpin Green Lane only led to Bow Lane and Bent Lane it was a quiet country lane, but first it was linked by Canberra Road to Church Road, this being an unmade road until the early fifties. However, the biggest change came in 1962, when the M6 Motorway was linked via Leyland Way to the new Turpin Green Bridge, the resulting increase in traffic causing endless problems at the junction with Canberra Road.

This was until early 1993 when the powers that be decided to construct the King Street bypass and the two mini roundabouts. The rockery and the old swings that used to front Turpin Green disappeared forever.. 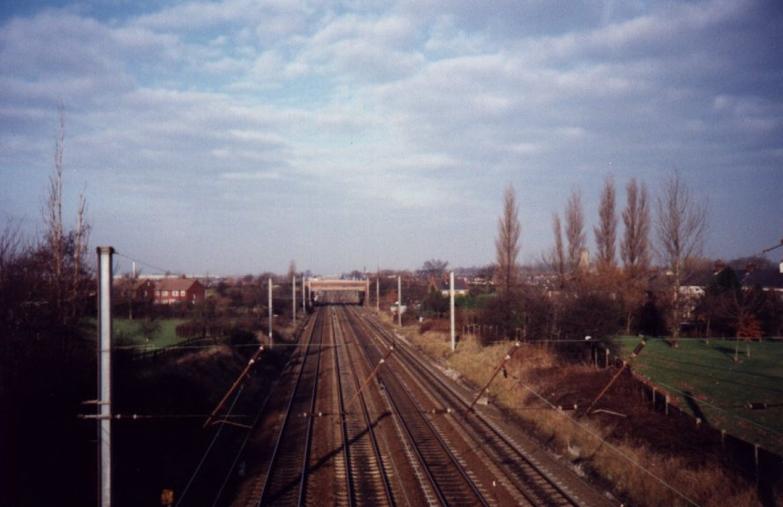