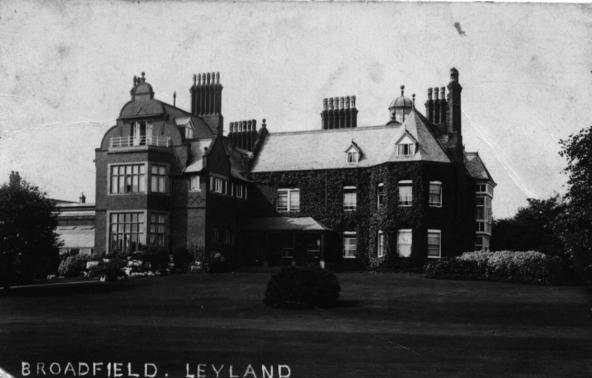 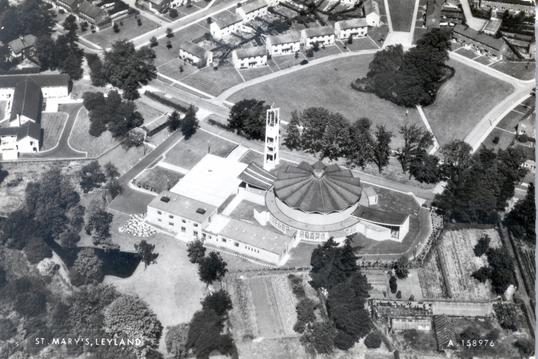 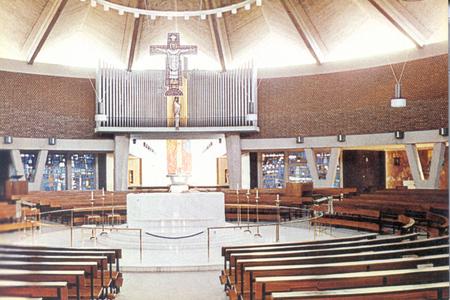 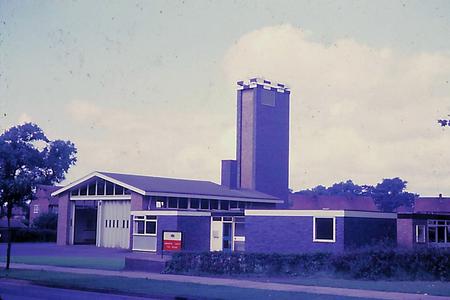 We now retrace our steps along Broadfield Walk until we pass the bottom of Spring Gardens. The walk then continues along Broadfield Drive and straight into Woodlea Road, which gives pedestrian access to Fox Lane.

This is Leyland's first purpose built fire station, the fire engines having moved from their previous home in the council yard behind the Public Hall.

The bleach works probably started about 1790 as a small crofters, the first lease being dated 1844 between James Fletcher and Squire James Nowell Farington. By 1872, the firm had become John Stanning and Son, though John Stanning had arrived the previous year as a sub - tenant of the late James Fletcher's lease.

The size of the works may be guessed by the number of its departments, many having dates over the door. The oldest dated building was at the entrance to the Scutchers - 1884, the next was the dye house alongside the chimney - 1886, the Beetle Place - 1890, the Blue Place and Clamp Room - 1900. The Engine House was dated 1902 and the Mercerise Place, which replaced the old cobbled yard, was dated 1913. These replaced the old works buildings from the same type of Littlewood brick.

Following the deaths of Susan Maria Farington and John Stanning, the lease was renewed until 1947 and the death of Henry Nowell Farington, the last resident of Worden Hall. Only then did the bleach works and Broadfield become the property of the Bleachers Association for the sum of £38,000. In 1968, it closed down and was demolished soon afterwards.. 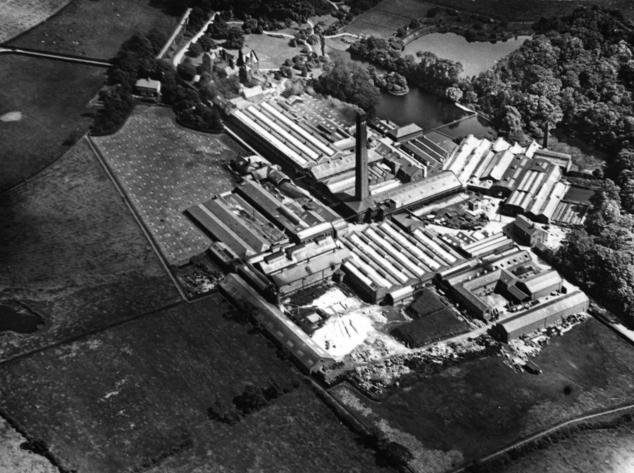 Broadfield, the home of the Stanning’s built in 1891, was a stately mansion with beautiful gardens built on the instructions contained within the lease between John Stanning and Susan Maria Farington of 1872. The house, gardens and surroundings had to cost a minimum of £3000, though the mansion eventually costed double the amount specified.

The two big lakes with boathouses, swans and ducks were really a reservoir for the works though they were stocked with brown and rainbow trout. In one room of the house, the panelling was from the Foudroyant, a ship that was wrecked off the coast of Blackpool. The mansion was demolished even before the firm itself closed down. 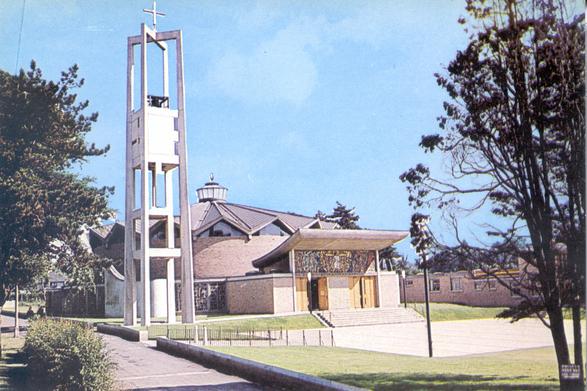 Following the vision of Father Fitzsimons, the unique circular church designed by Jerry Faczynski was built between 1961 and 1963 on the site of Broadfield House. The church was built by John Turner & Sons of Preston. The architect’s clerk of works was Joe Walmsley, a parishioner who had been the head altar server in his youth.

The church was opened on 4th April 1964 by Archbishop Beck of Liverpool and this then enabled the old church in Worden Lane to be closed. The church has recently been nominated by English Heritage as a post war building worthy of obtaining listed building status as Grade II listed. 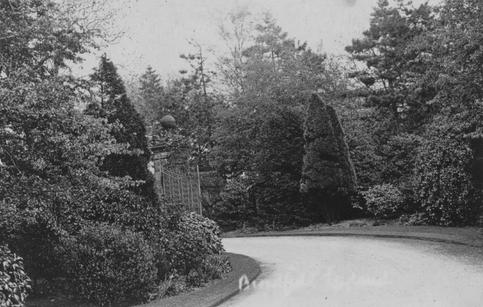 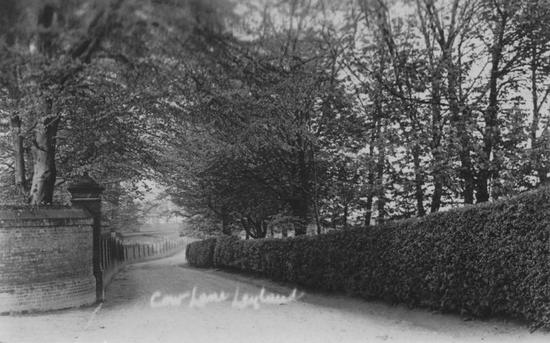 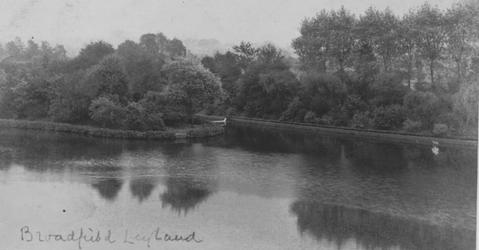 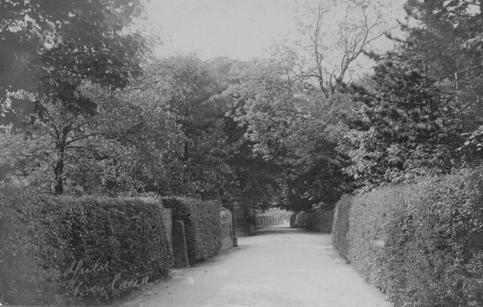 At the bottom of Spring Gardens, we cross Broadfield Drive to enter the tree lined Broadfield Walk.

This lane led from the west side of Towngate about 100 yards north of the Cross. It was a very beautiful lane with neatly trimmed hedges on both sides, the road itself being covered with red shale. Cow Lane was the main route from the village to John Stanning's residence " Broadfield " and the Bleach Works known as Shruggs.

The residence now again known as " The Warren " was for a time named " Haere Mai " which is Maori for " Welcome ". This is believed to have been renamed in 1928, when Mr Allen, the manager of the Bleach Works lived there with his wife who was a New Zealander.

The boundary between Shruggs Wood and Cow Lane consisted of a high brick wall, which followed the western side of the lane as far as the entrance to a market gardener's, now the site of Nursery Close. The last remaining section of the original wall can still be seen between Nursery Close and the back entry to St Mary’s Church.

Opposite to the entrance to the market gardeners, an enclosed footpath left the lane to cross a field to the bottom of Westgate. A short portion of the path at the side of the fire station still exists.

The Broadfield Estate was begun at the end of the Second World War with Italian prisoners of war aiding in the construction. The name of Broadfield comes from the two fields detailed on the tithe plan as Great Broadfield and Little Broadfield.

Down the side of George IV, Spring Gardens was previously called Bradshaw Street. The street had its own Sunday school, known as " The Mission ". The weavers cottages on Bradshaw Street, now demolished, were built in 1806 by John Bradshaw in an agreement under an early form of building society. These were sixteen houses sharing a common yard and a common lodging house, the street being occupied in the 1841 census by 109 weavers.

According to the 1896 Map, the row of weavers cottages were on the southern side of the street, the name of the street being Bradshaw Street near the Towngate end, while the western end was already known as Spring Gardens. There is only one property remaining in Orange Square, the cellar windows still show the buildings original use, though they were bricked up many years ago. The other buildings disappearing in the redevelopments of the 1970's, which led to the new library and courthouse. 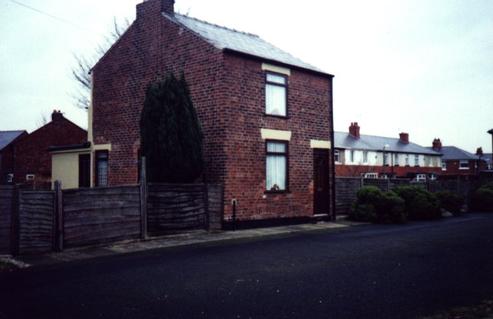 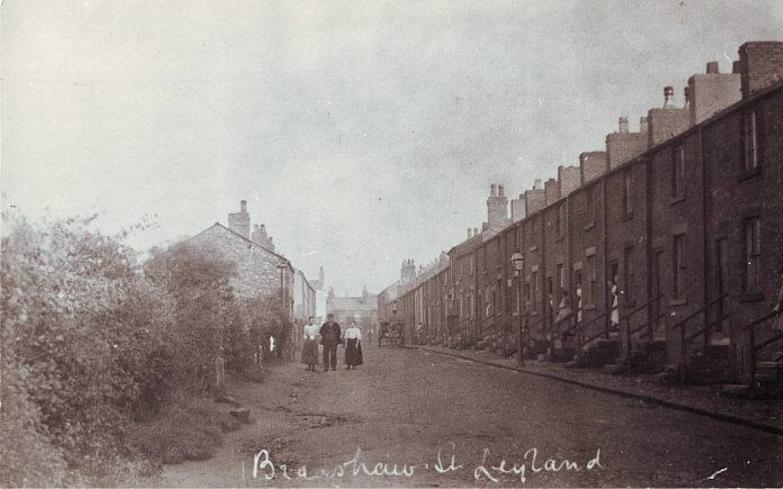