The factory carried on opening a London office on 22nd June 1885 at Basing House, Basinghall Street, London and the annual Fire Brigade outing, I hope someone was left on duty.

The change of name was slowly recognised in the general public arena.

Back in the factory in 1885, a new management team was in place with James Edgar Baxter, the Manager and Samuel Whitehead as the Sub Manager.

We had seen Baxter on the 1881 census as a 19 year old boarder in a house on Sandy Lane. He was from Dublin, Ireland, his father William Baxter was a  Boot & Shoe Manufacturer in Dublin.

He married Janey Tuer who was born 1864 in Preston on 24th June 1885. Her father was George Tuer a contractor from Carnforth.

The senior employees of the Leyland Rubber Company made a formal presentation to Mr Baxter on this occasion.

By the next census in 1891 he is listed as a 29 year old Manager living on Golden Hill. 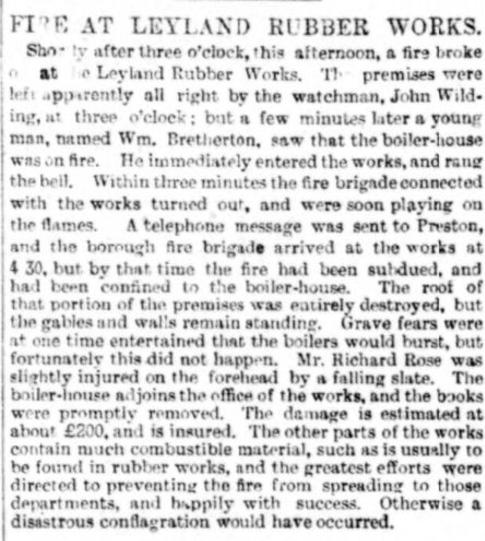 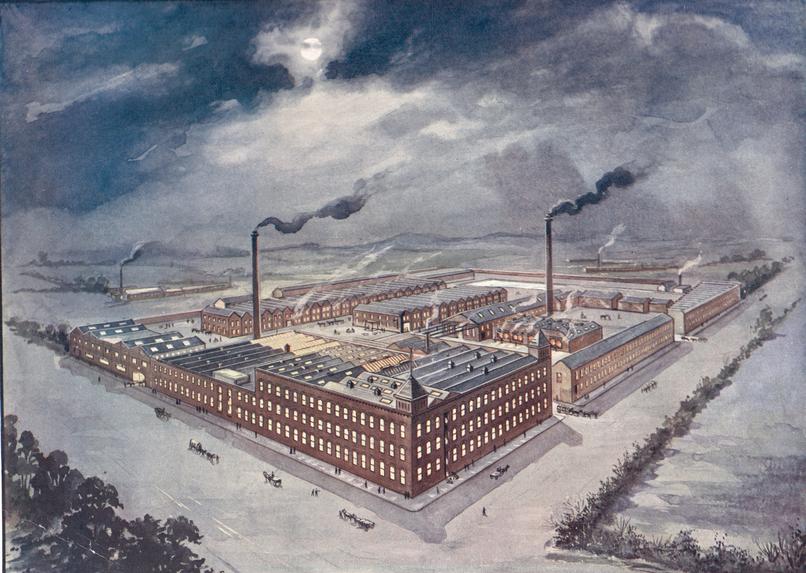 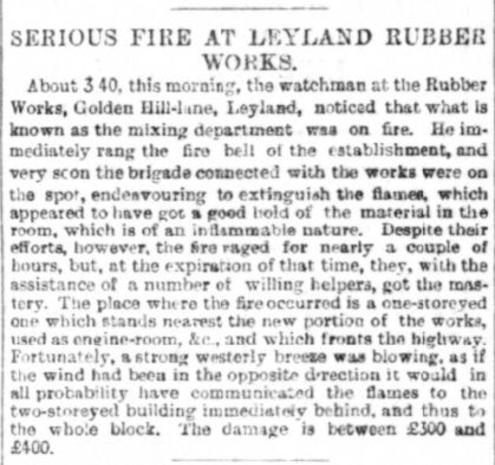 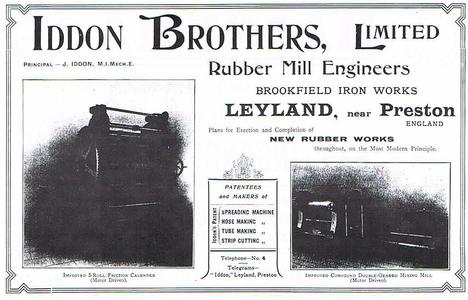 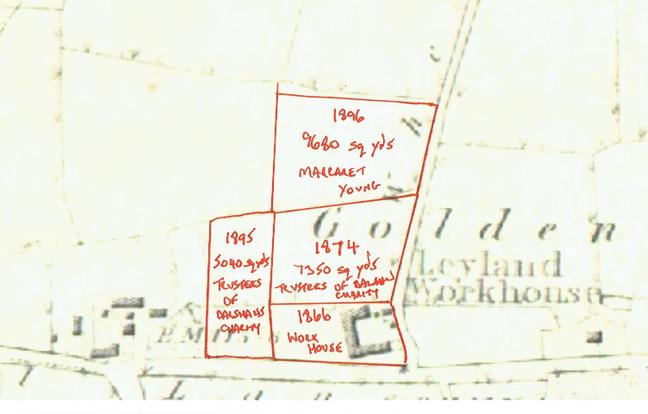 By 1883, changes were being made, James Quin was no longer in charge, the first sign of the change of name on 25th April 1883. The change of name was official, it was now the Leyland Rubber Company Limited.

NOTICE is hereby given, that the Order of the Court of Chancery of the County Palatine of Lancaster, Preston District, dated the 13th day of January; 1885, confirming the reduction of the capital of the above-named Company from £100,000 to £40,000, and the Minute approved by the Court, showing, with respect to the capital, of the Company as altered, the particulars required by the above statutes were registered by the Registrar of Joint Stock

Frederick Caiman, of No. 8, Lune-street, Preston, Solicitor for the said Company 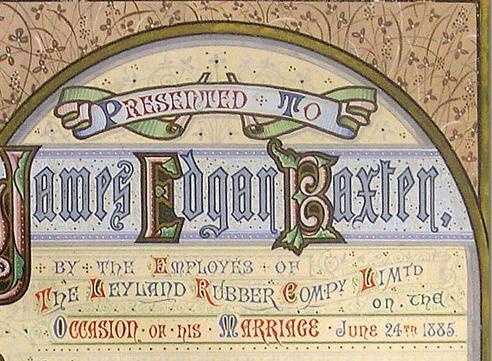 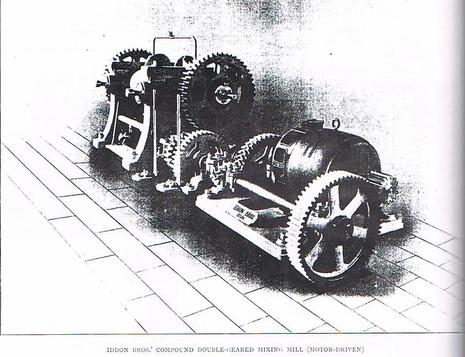 Following Robert Eastham’s departure from the firm, James Iddon enters the story.  He was born in 1859, the son of a boot maker from Water Street. He was educated at the Leyland Grammar School and in 1876 he commenced a seven years' apprenticeship in the engineers' department of the Leyland Rubber Co., then James Quin and Co.

On its completion in 1883 he went to America, and worked during the next two years at the works of Sellers and Co., Bement Miles and Co., and Baldwin and Co., all of Philadelphia. He also studied during that period at the Franklin Institute.

In 1885 he returned to England to take the post of chief engineer to the Leyland Rubber Co., and held that position until 1888, when he started in business for himself, under the name of Iddon Brothers, engineers and rubber machinists, Brookfield Iron Works, Leyland. His firm erected large rubber works both in this country and on the Continent, and supplied the machinery, some of which was invented by himself. He was one of the first to grasp the importance of hydraulic pressure in connection with rubber vulcanization, and his advocacy of the principle was eventually justified by its general adoption. He also devised a number of machines which have been used in the manufacture of pneumatic tyres.

His health had been indifferent for some years, necessitating an operation in March 1910. This afforded him some relief, but his health gradually declined, and his death took place at his residence at Leyland on 15th May 1911, at the age of fifty two. He became a Member of the Institute of Mechanical Engineers in 1900.

James Iddon took over the original 1862 site of the Brookfield Rubber Company renaming it Brookfield Iron Works. He bought the land from the then current owners in 1891, Messrs J C Lomax and John Lord (the Wire Works man), who were executors to John Lomax deceased. Before he died in 1889 John Lomax was the son of a rich Cotton magnate from Bury, his estate of £163,257 19s 7d, an absolute fortune (current value £14,667,157.30).

John Lomax appears to have had a couple of properties in London, one at 25 Upper Grosvenor Street had the Duke of Westminster as one of his near neighbour at number 31. His son J.C. was made President of the Luton Football Club in his father’s absence at the 1889 Annual General Meeting, a post he held until 1893. (the things you find on a football club’s website) 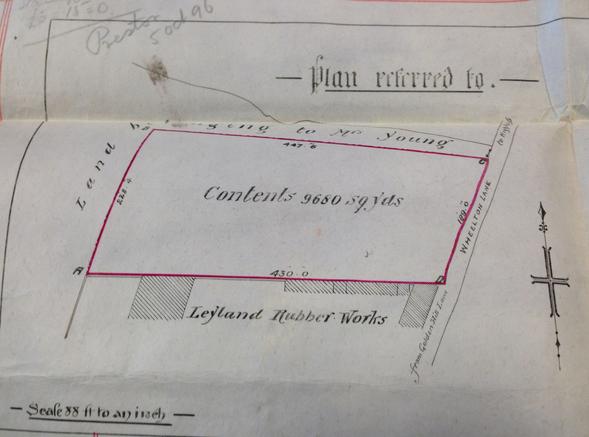 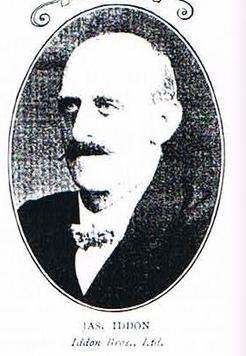 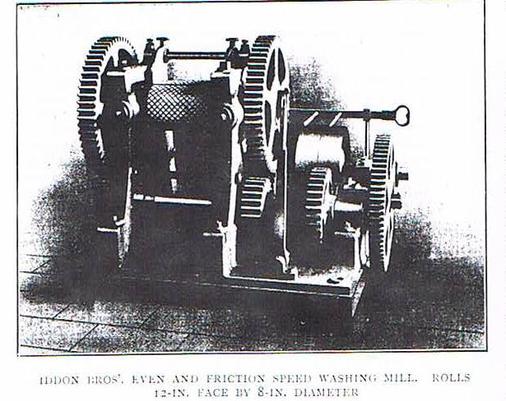 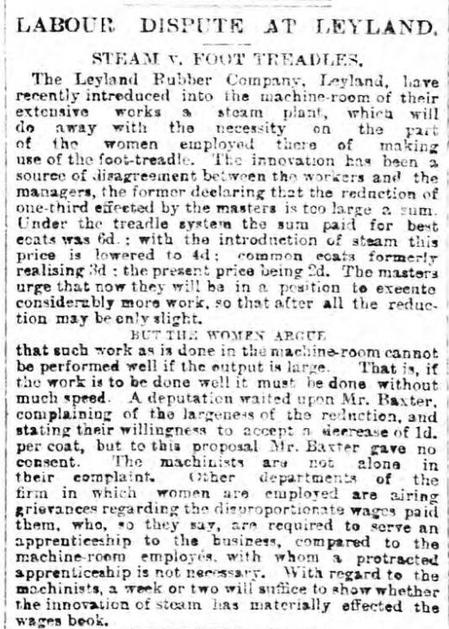 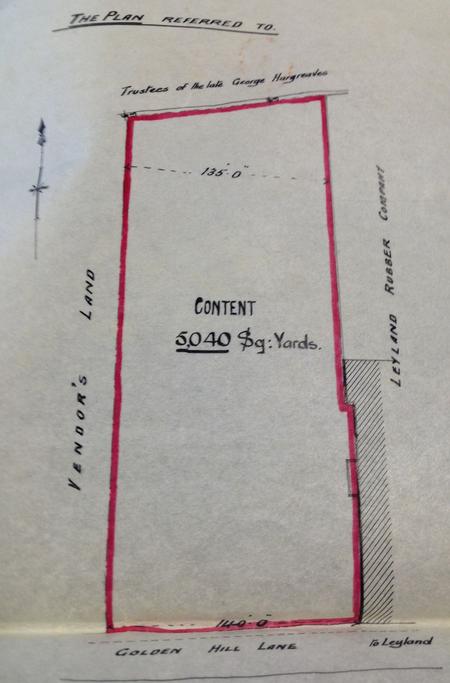 The 9680 square yards was purchased from Margaret Young for £726.00 with the current factory to the south. 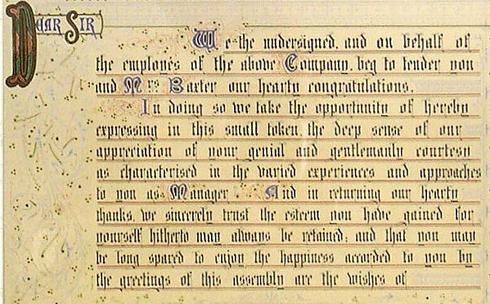 Much building took place, some because of fires , other expansion

The planning records denote Iddon Brothers application for a machine shop and offices from 1891.

The firm, still on its original site in Quin Street, is known worldwide as manufacturers of specialist machinery and is the only remaining industry in the centre of Leyland.

The 5040 square yards was purchased from the Charity with the current factory to the east.

View the full rubber workers census details by clicking on the button.

Whilst new steam technology caused the first labour dispute at the factory on September 24th 1892, the profits continued to roll in.

There was about to be the big change.

By analysing the Census data, we can locate 174 of employees actually living in Leyland in 1891. The influx of people into Leyland continues as the town continues to grow.

Ages were another interesting breakdown, 1881 in brackets

It was now a much younger workforce Again the big surprise however was the retention of the workforce from 1881, there were only 25 that were still working for the Rubber Works in 1891.

It is again interesting to note the job titles that the employees gave to the census takers as follows, 1871 & 1881 in brackets

Note that some of the jobs are getting more specialised.

Of course this is the last census where we can assume that all workers that quote rubber worker are working for Leyland Rubber as the 1901 and 1911 will also include Baxters and Wood Milne workers.