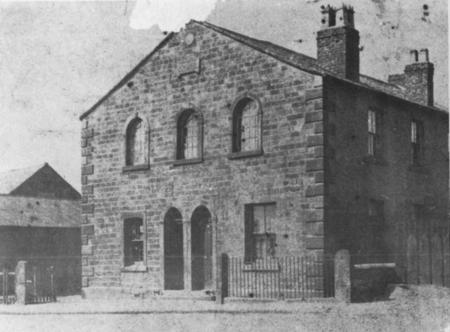 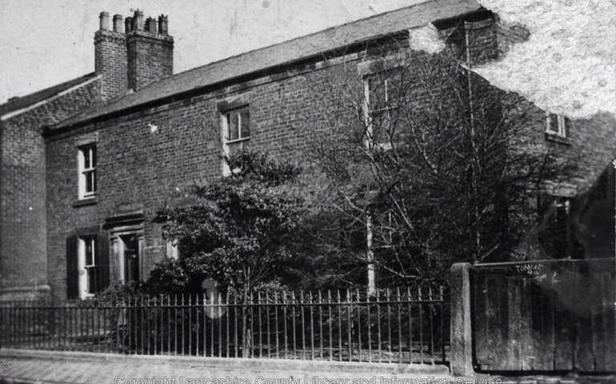 The Roundabout was constructed with the dual carriageway of Churchill Way in 1966, to enable the increased traffic to negotiate Gas Works corner..

The Springfield Works owned by G.L Tootells Ltd was founded in 1862 where gold and silver wire was manufactured into gold and silver thread and plate, tambouring threads, braids, cords and tinsels. This business continued into the 1950's, the site then being taken by Tom Lane, later still Lyn Trafford had his interior design showroom in the premises, now occupied by the Kingfisher accountancy firm. 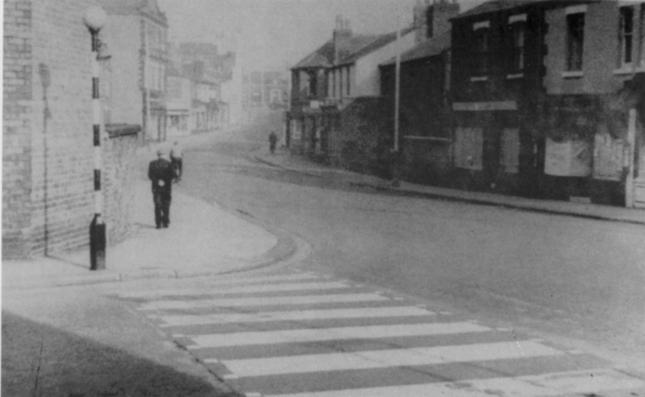 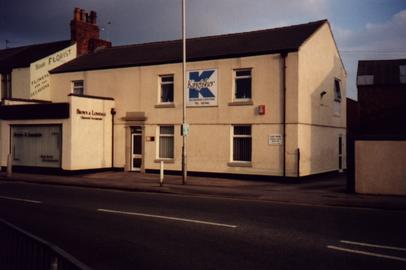 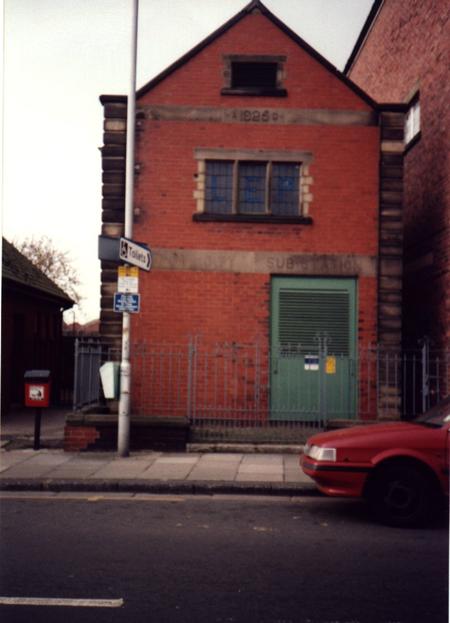 The sub-station was built by a forerunner of Norweb namely Lancashire Electric Power in 1925, the site was previously the Post Office in a wooden building before moving across the road to new premises later taken over by Leach's Furniture shop though now occupied by a curtain shop.

The Gas Showrooms and Toilet Block

This was the head office of the Gas Company before it became just a gas showroom in the 1960's, though it managed to survive to outlive the adjoining Gas Works, becoming a shop before its eventual demolition in the 1980's, when the Gas Works site was finally cleared.

The toilet block in Chapel Brow was the first purpose built facility in the town, a relief all round for the population.

The culvert then took the stream under Chapel Brow before emerging into the centre of the gas works complex. There is of course a long history of flooding around this area, the most recent and most spectacular example being in August 1987, when the flooding reached the roundabout and the new lake was featured on the national T.V. news, with the local children diving into the murky water from the top of the bus shelter. 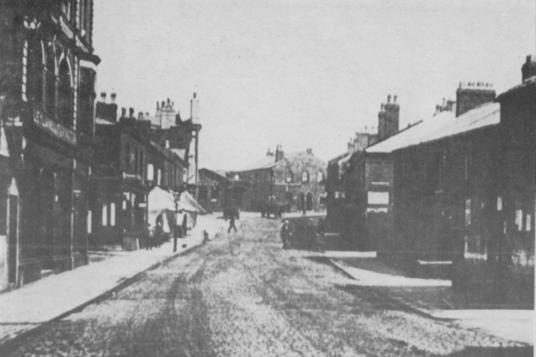 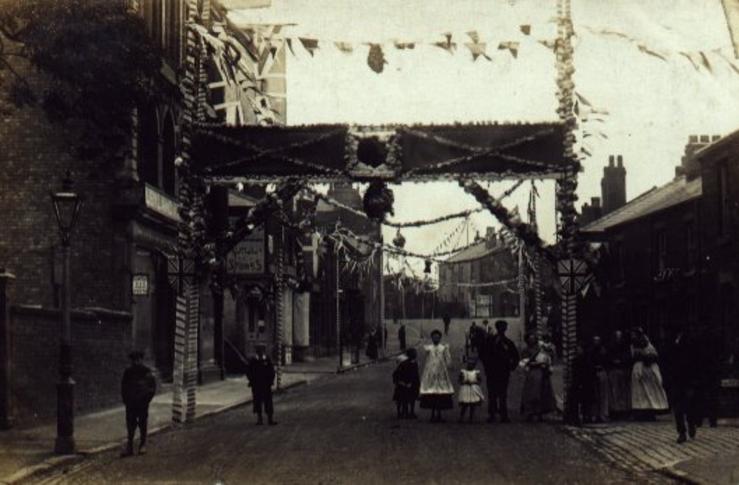 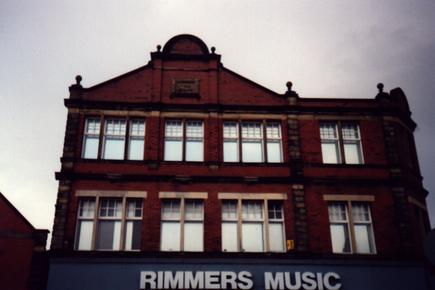 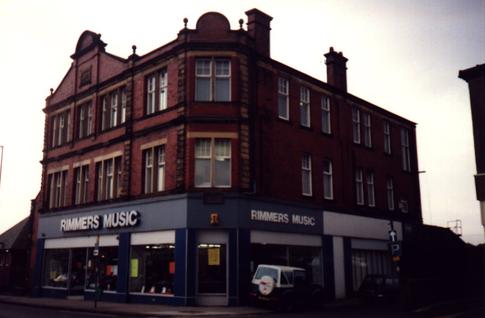 This fine building on Chapel Brow dated 1903 was the headquarters of the Leyland and Farington Co - operative Society. The shop was the non-food department of the Co - op; drapery, furnishings, electrical goods and footwear with a boot and shoe repair service. The upper stories were the offices of the Society. Many people will remember Harry Butterworth who was a manager here.

A long remembered feature of this store was the payment of the quarterly " divi ". There was two distinct systems for recording the sales to individual members of the Society, the method used by the Leyland & Farington Society was known as the " Eccles ", whereby the member received a duplicate receipt which was then attached to a gummed sheet and at the end of the period, the sheet was presented at the Society in order that their " divi " could be calculated As a matter of interest, the other system was known as the " Climax " , requiring a third receipt which was filed in membership number order at the Society, the Society in this case keeping the members records, whereas the other system relied on the member keeping the record.

The queue that formed on the day the dividend was paid often stretched down Chapel Brow passing the Gas Works and even turning into Hough Lane. The store closed in 1970 when the new store was opened on Towngate. The site is now occupied by Rimmers music shop and a computer software office upstairs. 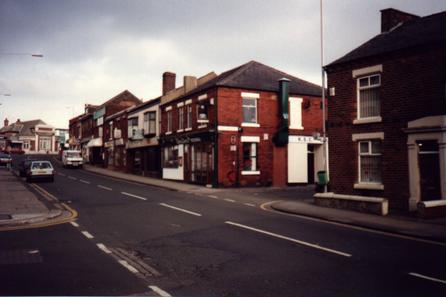 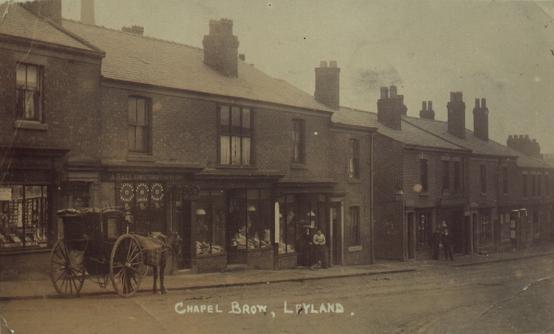 The shops of Chapel Brow

The banks and shops down the east side of Chapel Brow today are only following on a tradition, previous shops included Harrisons Chemists and “Gregorys” which was a pawnbrokers shop owned by a Mr Berry who later joined with Mr Pilkington to form the first cotton spinning and weaving mill at Seven Stars under the name of Pilkington and Berry, before expanding operations by acquiring Brook Mill, (the shop now forming part of the Trustee Savings Bank).

The next building, now the Italian restaurant with the Fishwick garages behind was formally Singletons, the funeral directors, cab proprietors and general carters who were to become bus operators eventually selling out to Fishwicks. Other shops included John Carline - Fishmonger; Watson & Baron - Shoemakers; Bannisters - Jewellers (who were one of the first shops to have electricity - they generated their own); Sutcliffes - Cake Shop; Maurice Brooks - decorating supplies and Briggs Dry Cleaners.

On the west side of the brow, there was Corcoran's Newsagents, Dorothy Barnes Wool Shop and the recently closed Brewers Record Shop, not forgetting the Chinese Chip Shop, which was the first foreign food take away in the area, though now has plenty of competition. At the end of the row, there were three cottages known as Gas Terrace.

The site of Fleetwood Hall can be said to be close to the corner of Chapel Brow and Fleetwood Street; the present building, having had many uses including on the ground floor, Sutcliffe & Hill - Confectioners followed by Briggs - Dry cleaners, Hairdressers, Cafe and now a pizza restaurant. The upstairs being used as the Leyland Liberal Club, then the Prudential offices, then Taylors Opticians before becoming the Knights of St. Columba club. 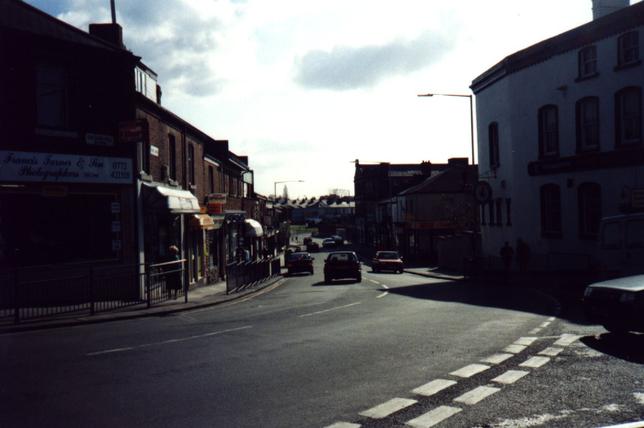 This was named after the Wesleyan Chapel on the site of the National Westminster Bank. According to the 1844 Ordnance Survey Map, the only buildings on the Brow were Fleetwood Hall and Barn Fold on the east side.

By 1893, Fleetwood Street and Orchard Street had replaced Fleetwood Hall, with Grundy Street having been built together with the row of houses and shops down the brow. The 1938 Map shows the Chapel Brow we know today, except for the disappearance of the industrial sites namely the Gas Works and Brook Mill.

The Bannister Brook still runs under Chapel Brow before passing through the Gas Works site, originally in a culvert under the backs of Fleetwood Street, flooding often taking place until a new culvert was constructed under Fleetwood Street itself. The Brow was cobble-stoned to aid the horses until after the Second World War.

Wesleyan Chapel and the Bank

The Chapel was built in 1814, following the use of a room in Towngate. As the movement continued to expand, all the seats were taken and the Sunday school attendances doubled. The foundation stone for a replacement church in Turpin Green was laid by J.G McMinnies, the owner of Farington Mill, on September 18th 1875.

On 12th December 1911, the Manchester & Liverpool District Banking Co Ltd (1829 – 1924) opened a sub-branch in temporary premises at Chapel Brow. As the Board minutes state “ On 12th December last a new sub-branch to Preston was opened in temporary premises at Chapel Brow, Leyland, and business will be transacted there on Tuesday, Thursday and Saturday; our already existing office at Towngate, Leyland, being opened on Monday, Wednesday and Friday, as heretofore. Leyland is a scattered district, and it has been thought desirable that the Bank should have an office in that portion of Leyland, which is somewhat far removed from our Towngate branch. We have arranged to purchase a site for a permanent office near the Chapel Brow temporary premises “.

Therefore on 6th July 1912, the Manchester & Liverpool District Banking Co Ltd bought premises at 4 Golden Hill Lane on the corner of Hastings Road and Golden Hill Lane, transferring the business to the permanent premises on 3rd July 1913. Though according to the trade directory of 1913, the opening hours reverted to the same as the Towngate branch.

The premises were described in a Nat West valuation report as “ rustic brick front with stone facings “ and in a “ good commanding position at the top of shopping street, but on the edge of the shopping area “. The accommodation included a vestibule, banking chamber, manager’s room and clerk’s room on the ground floor, with another clerk’s room and book room on the first floor.

The business steadily expanded and on 2nd September 1929 Leyland was severed from Preston branch and constituted an independent branch of the Bank. In November 1934, the title of the Bank was shortened to County Bank Limited and in 1935 County Bank was acquired by the District Bank.

According to the 1936 Trade Directory, the merger of the District Bank and the County Bank had taken place with the business of 4 Golden Hill Lane being transferred to the County Bank branch premises at 2 Golden Hill Lane (the present branch). Though the Bank’s own records say the merger only took place on 2nd August 1938. The old District Bank was sold to Leyland Paints. On 1st January 1937, Leyland was constituted a Full Branch of the Bank.

On 27th May 1974, the Bank purchased the freehold of the adjoining premises at 4 Golden Hill Lane, which had been sold by the District Bank in 1948, and the branch was extended on the enlarged site during 1975 and 1976. 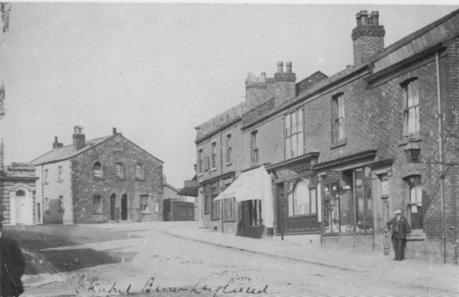 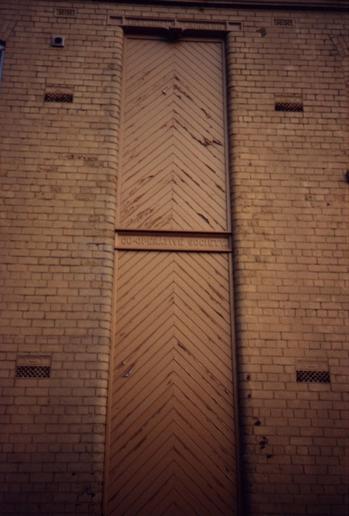 This public house was built in the 1850's, with the Leyland and Farington Co-op Store next door being built as one building. In Chapel Brow, the Vaults was a separate building with entry through a door onto the Brow.

This was the original shop and distribution centre and still shows signs of its original use even though it is now a restaurant. A well-known manager in the 1930’s and through the years of World War II was Tom Marsden.

The Co - operative Society built their stores to a regular plan, ground floor shop and upper storey for storage of the bulk supplies. These were “chuted” down to the cellars where the “bagging up” of the flour, sugar, rice etc., was done on a Monday morning.

The hoist can still be seen on the west side of the building down the back entry between Golden Hill Lane and Grundy Street with “Leyland & Farington Co - operative Society” picked out in cast iron. 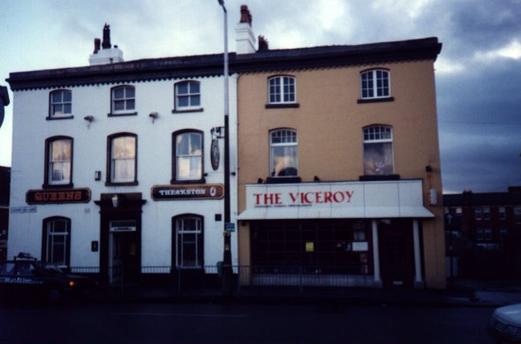 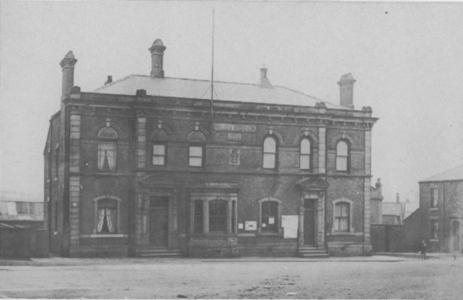 The new police station was built in 1882 to replace the original building in Towngate. The position of the station could be taken as an indication of the trouble expected from incomers off the trains, though more probably for the convenience of the officials coming to the "Courts" and "Sessions" that were held there - the train being the only mode of transport for anyone but the locals. The architecture of the building seemed to be a standard design with similar stations in Bamber Bridge and Croston. The street down the side of the station was named Hewitt after one of the first inspectors.. 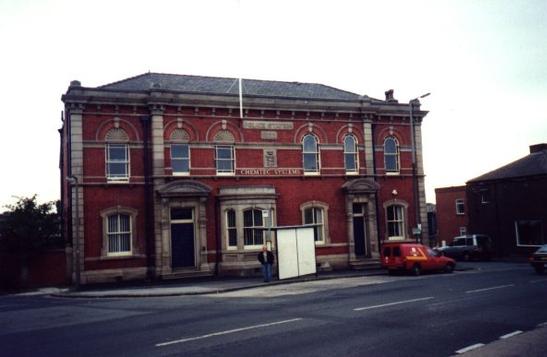 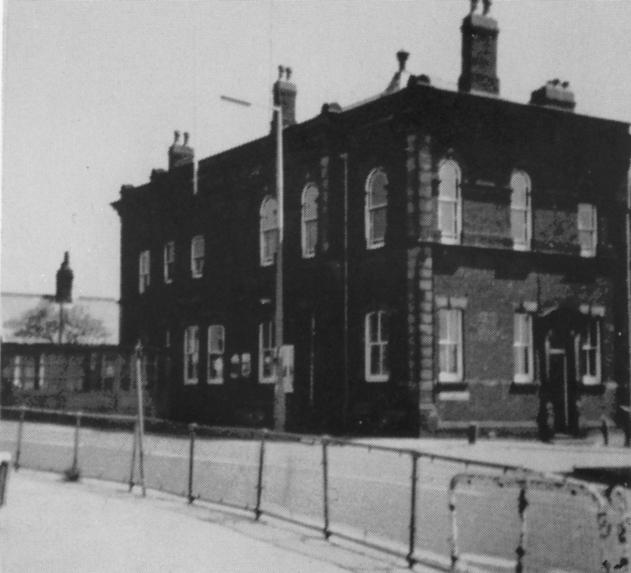