THE FESTIVAL ROUTE THROUGH LEYLAND'S HISTORY. 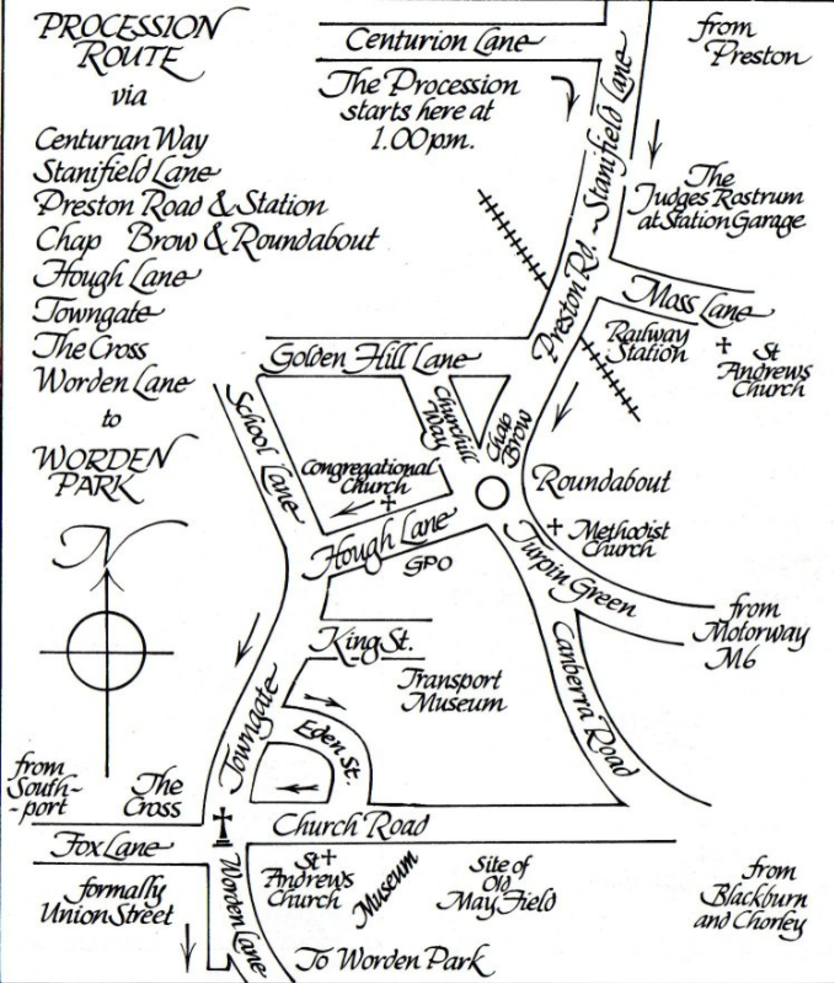 When the Leyland Historical Society began to compile a list of the historical sites and buildings along the festival route, the resulting display in the 1994 Leyland Festival Craft Tent was much larger than we had envisaged. The interest shown on that day, followed by the later displays at the South Ribble Museum, made the Society realise that this large amount of information should be available for the general public.

With many changes taking place, including the demolition of Spring Bank on Hough Lane and the Leyland Motors Canteen on Thurston Road, the recording of all the remaining buildings should be carried out.

These pages on the website were originally a book called “The Festival Route through Leyland’s History”. Though it is by no means the final word on any building or site, any additional information that can be discovered and any new local knowledge is always well received.

The Leyland May Festival of Wednesday 29th May 1889 was first intended as a children's fete, to revive the fast dying observance of Royal Oak day. It was arranged by the Sunday School teachers of the Parish Church.

The Festival was usually fixed for the last Thursday and Saturday in May. It was held annually from 1889 - 1936, with a exception of a two years break in 1901-2, and four years during World War 1. It was revived in 1951, to celebrate the Festival of Britain and the official opening of Worden Park.

The original route was from the schools in Union Street (now Fox Lane), through Towngate, Hough Lane, Chapel Brow as far as the Railway Station - later extended to Mill Street - returning by the same route to the Mayfield.

In 1966, the assembly point was St. Andrews Green behind the War Memorial, the route then proceeding down Balcarres Road, Turpin Green Lane, Hough Lane, Towngate and then down Worden Lane to the park. In 1969 many things changed, following a run of bad weather it was decided by the festival committee to move the date of the festival to the first Saturday of June. Changing the starting point to Centurion Way allowing the procession to pass through the more populated area of Stanifield Lane, Preston Road and down Chapel Brow to Hough Lane, thence the usual route to the park.

So as the procession formed up in Centurion Way on the first Saturday in June each year until the last festival in 2000, that’s where we begin ...