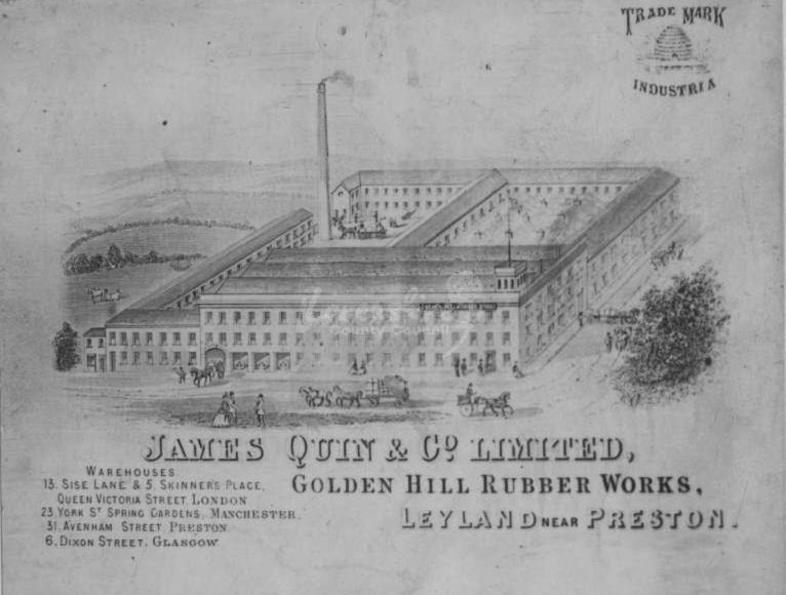 After the fire of 1880 the old workhouse was demolished and the new building was built on the corner of Golden Hill Lane and Wheelton Lane as can be seen from the detail of the 1893 Ordnance Survey map below.

On 2nd October 1879, James Quin then mortgaged the properties to the Lancaster Banking Company (later part of Nat West) and between 22nd September and 4th October 1880, George Haworth and Mrs Berry (widow of the second Richard Berry) assigned their properties to John Berry Smith (the stepson of James Quin.)

The day before the freeholds were mortgaged, 8th December 1880, there was a conveyance from James Quin and his mortgagees to John Berry Smith.

According to the Accounts Book the details were as follows

The deed on 9th December 1880 was signed by James Quin, John Berry Smith and the trustees of the Charity, Edward Hardcastle, Herbert Philips & William Henry Houldsworth.

James Quin of Leyland, in the county of Lancaster, for the invention of "a new or an improved method for protecting India rubber valves, tubes, and other like articles from chemical action.”

So this photograph which was always assumed to be part of the workhouse would now seem to have been built between 1874 and 1878 for James Quin & Co Limited as a Lodge and Packing Warehouse with the company offices on the first floor.

The small boy in the hedgerow, Harry Sharp, grew up to follow his father, W Sharp, as foreman of the mixing department eventually becoming the Works Manager from 1930 until 1962.

Amy was the 2nd daughter of Richard Berry and Mary Ann Smith. The couple got married on 15th May 1875 at St Andrew’s in Southport, they had Sarah Isabel on 8th February 1876, Amy Elizabeth on 31st July 1877 and Richard Herbert on 17th February 1879. However, husband Richard passed away on 17th November 1878, which explains why Richard junior was born at Golden Hill House.

In the 1881 census widow, Mary Ann Berry was at 19 Newsome Street with her own two children, occupation grocer and general shopkeeper. Amy Elizabeth Berry would go on to live until 93, only dying in 1970.

13th August 1874 – It is reported in the Company Accounts that a further 7350 sq. yards were purchased from the Trustees of the Balshaw’s Charity to enlarge the factory to the north along Wheelton Lane.

Though to be confusing as ever, there is no record of any Conveyance for this plot of land in the Companies deeds or any mention of it in the subsequent Abstract of Title. As we will shortly see this becomes the main factory for a period of time. 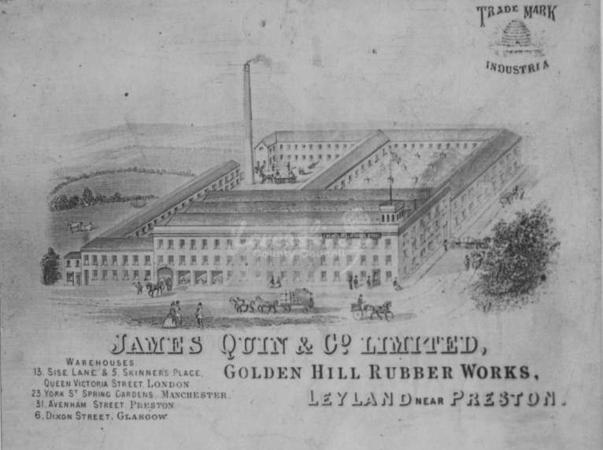 (Note the address in the City of London again)

James Quin, of Leyland, in the county of Lancaster, has given the like notice in respect of the invention of "protecting India rubber valves, tubes, and other like articles from chemical action." 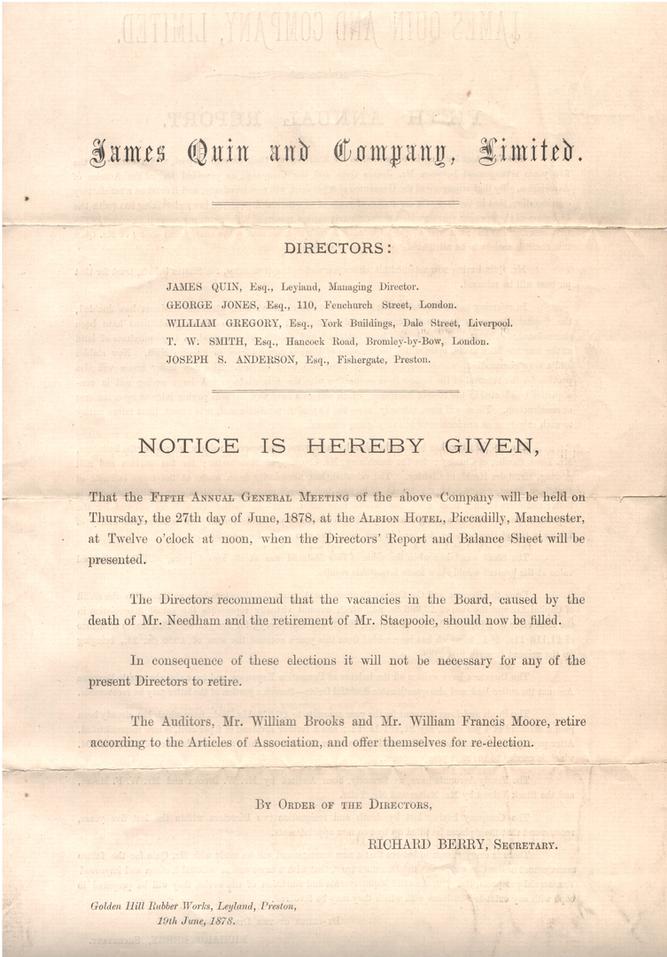 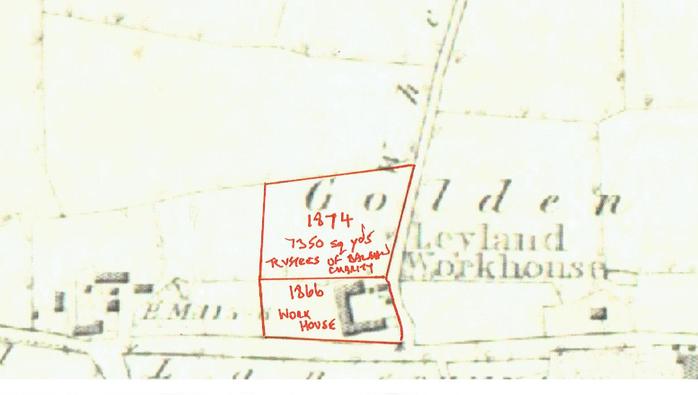 James Quin joined the Leyland Local Board, a forerunner of the Council. He had plans.

To learn more, click on the button below to read about James Quin's attempt to make a factory village. 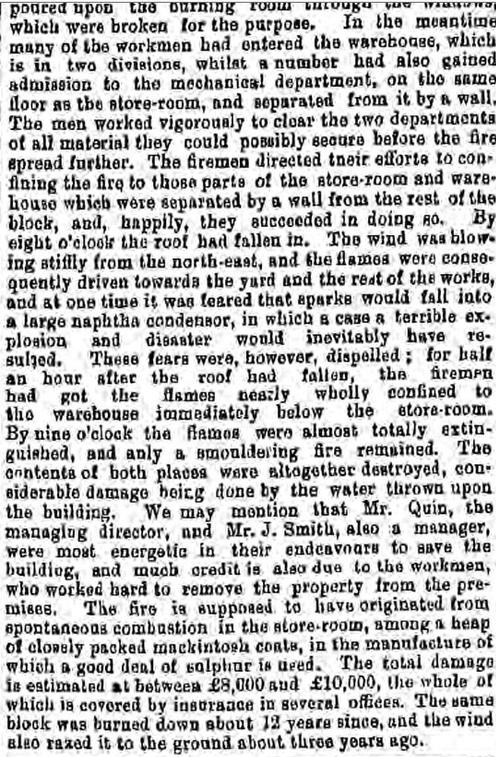 The Fire Report article stated that the total damage of £10,000 would be covered by insurance policies. However, it does seem strange that only one month later on 9th December 1880, James Quin and John Berry Smith mortgaged all the freeholds of their properties on Hough Lane, Herbert Street & Newsome Street to the Barnes Samaritan Charity for £10,000, todays value £841,000.

Prior to that other interesting transactions had already taken place, with each of the parcels of land on the properties having been mortgaged as below

4. The Rubber Industry comes to Leyland

Whilst the above illustration is a slightly artistic   view of the factory from Golden Hill Lane, the design of the new building of the early 1880s matches that on the later colour painting. This building burnt down in 1913.

As seen above the record for James Quin now states that he is a India Rubber Manufacturer employing 300 hands.
By analysing the Census data, we can locate 103 of these actually living in Leyland in 1881. The influx of people into Leyland continues but now there is one big difference from the previous census.
The houses on Hough Lane, Herbert Street and Newsome Street account for many of the incomers with 58 workers living in these streets.

Ages were another interesting breakdown

The big surprise however was the retention of the workforce from 1871, there were only 18 that were still working for the Rubber Works in 1881. It is perhaps the main reason that James Quin built the houses for the workforce.

It is again interesting to note the job titles that the employees gave to the census takers as follows, 1871 in brackets

The details of the apprentices are interesting for again in this census I have followed the employees to the next census in 1891 to see if they were still employed at the rubber works.

One of the apprentices was indeed in the rubber industry but living in Withington, Manchester, a notable area where ex employees could be found. The other ex apprentice, Charles Derbyshire, was now classed as an African trader but still living in Church Road, Leyland with his brother 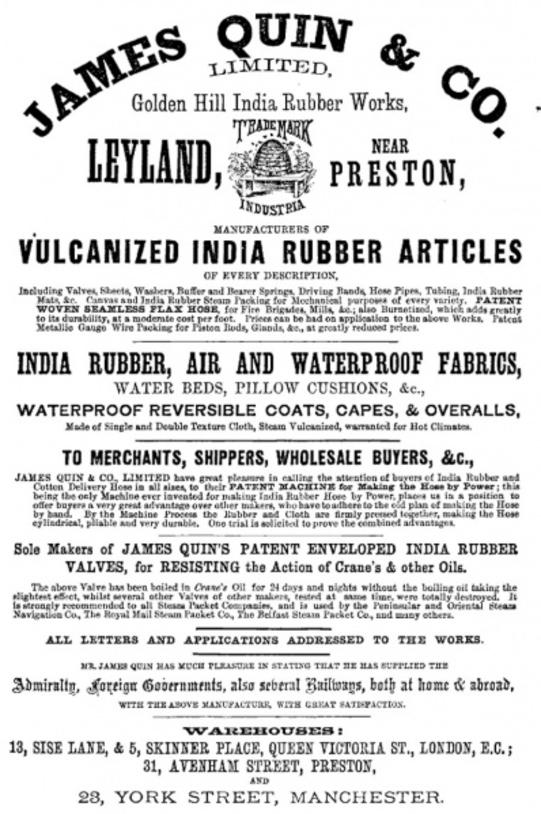 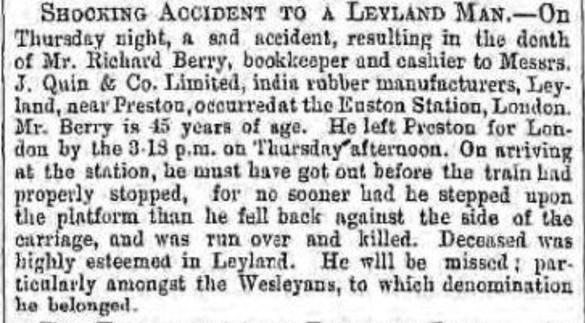 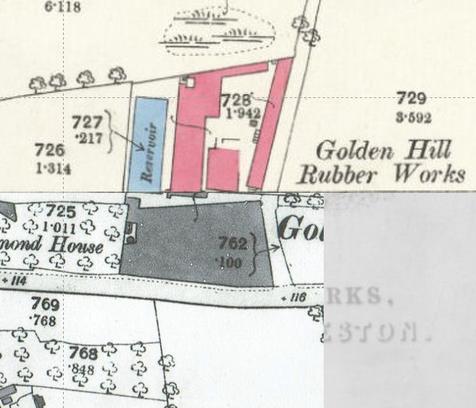 21st November 1877 – Patent No 4438.  James Quin, of Leyland, in the county of Lancaster, has given the like notice in respect of the invention of "an improvement in the manufacture of soles for boots and shoes, and apparatus used therefor."

In a Conveyance dated 3rd May 1873, James Quin transferred the company from his name to James Quin & Co Limited whose company address was 85 Gracechurch Street, in the city of London.

The consideration was £1000.00 which was paid to Mr Quin and was probably spent on his next project down off Hough Lane.

By the 1881 Census, James Quin and family were now in Golden Hill House which ironically later in the 20th Century became the offices of the BTR just off Golden Hill Lane. 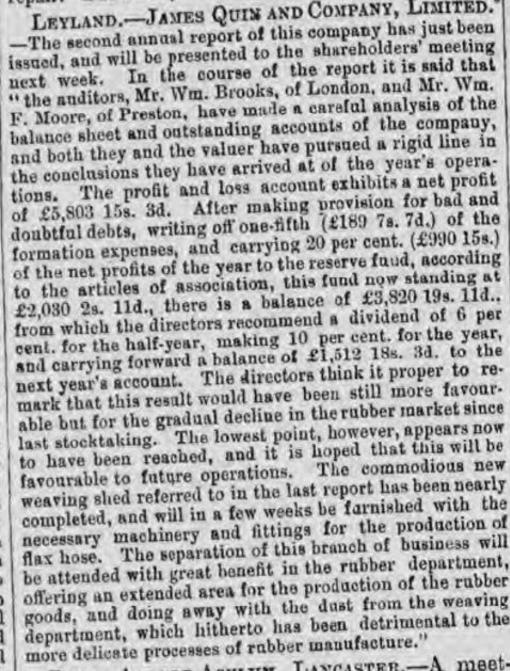 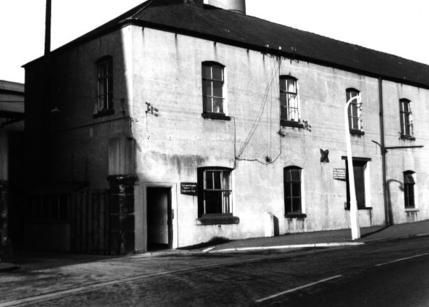 An advertisement from 1876 with vulcanized India Rubber articles of every description. 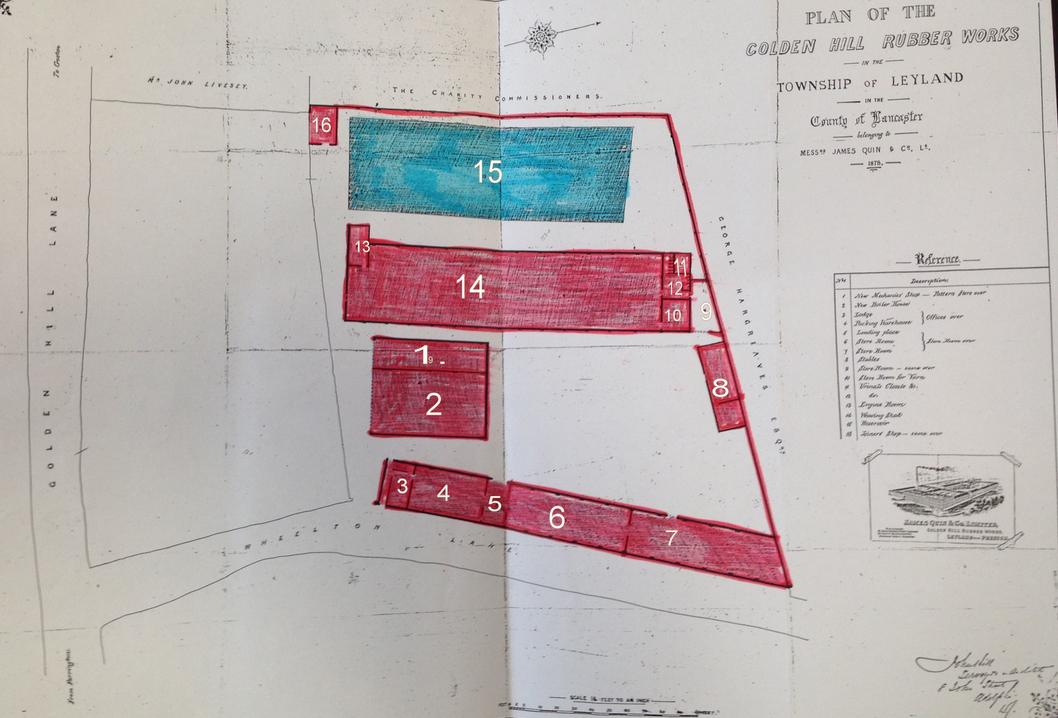 27th September 1973 – Richard Berry, cashier to the Company was killed at Euston Station. Richard Berry was the father of another Richard Berry who was married to Mary Ann Smith, the daughter of Sarah Quin. 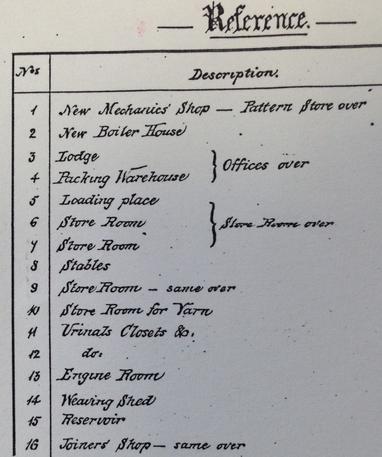 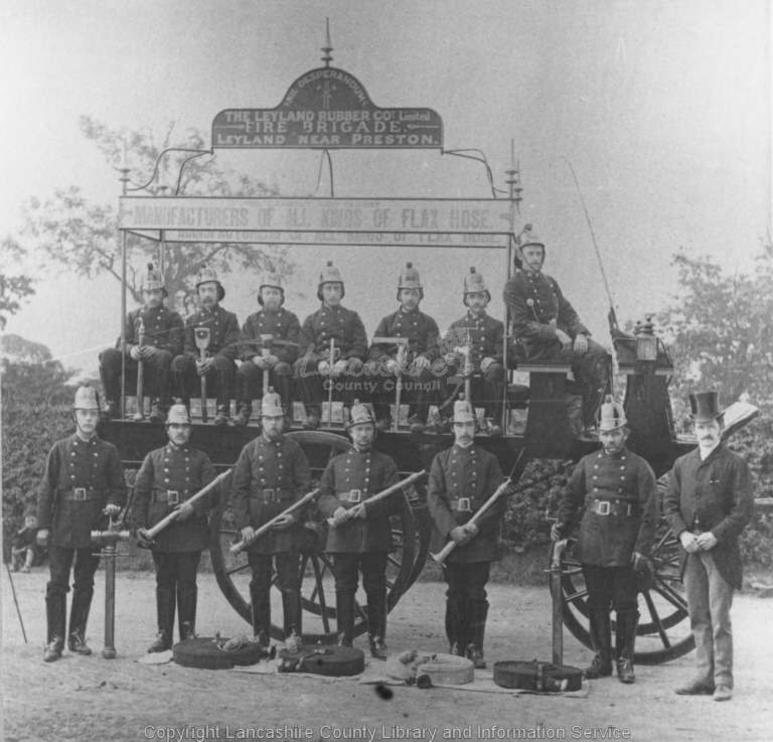 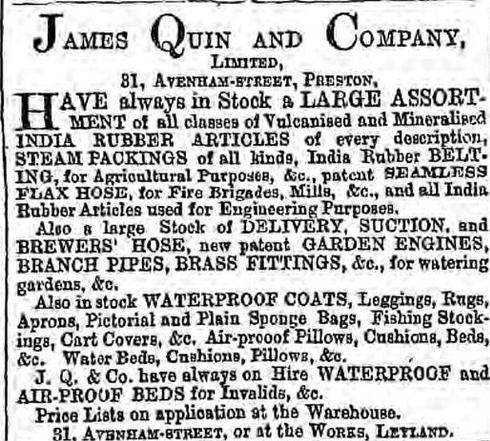 A detailed map from the 24th May 1880 Mortgage in favour of Gordon McMinnies for £1500 shows that the factory in 1878 was on a new site to the north on Wheelton Lane.

The original works based on the old workhouse being to the south to the junction with Golden Hill Lane.
The mortgage was transferred from Gordon McMinnies to William Boardman Bashall on 15th July 1883, both directors of Farington Mill.

The new Fleetwood factory, mentioned in a newspaper article in 1877  but although it is on the 1893 map had closed by 1895 and a school built on the site. 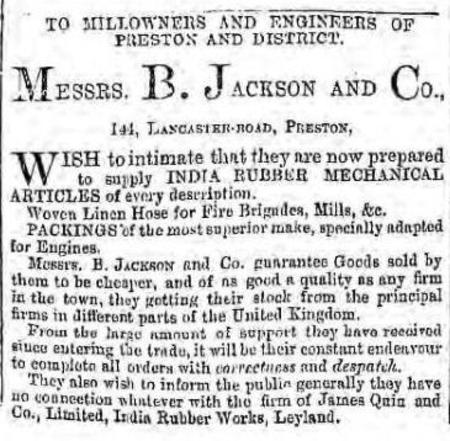 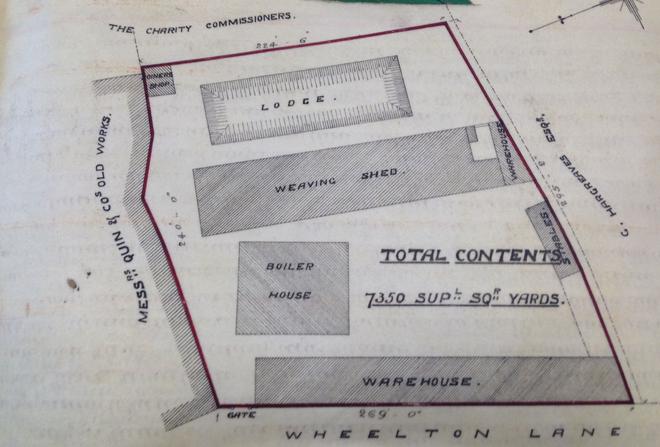 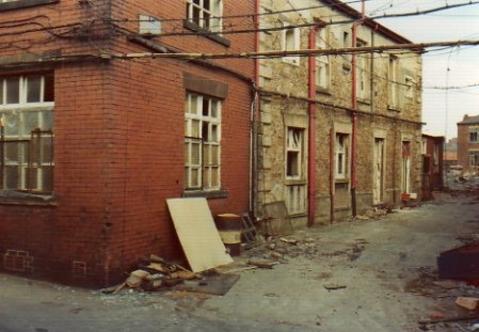 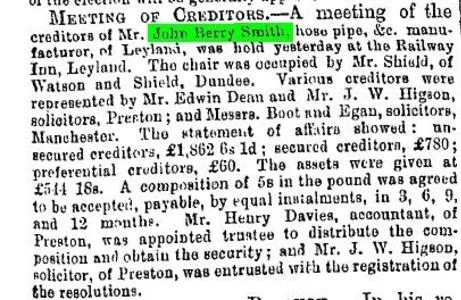